After everything else that's happened around Wterloo60 the After-Action-Review seems like a bit of an anti-climax, but guess I'd better do one for completeness!

The 6km x 3.6km battlefield was represented at 1mm=1yd on two tables, each 20' x 6', split into a North and South table. We toyed with other arrangements (e.g. East and West, or even T shaped) but this was the only one that really worked, and it was only in the last turns that we had any across the gap fighting - which the grid makes easier anyway).  The whole table had dots every 10cm to give the grid that controlled all movement, firing etc. For more info on the terrain building see Converj - David's Blog: Waterloo60 - The Terrain (newconverj.blogspot.com)

Forces were 20mm, at 1:33, so about 4300 figures to deploy. We had some excellent sabots with double depth backs for labels done by Jim Moore of ProductsForWargamers, which made troop movement easy and kept on-table clutter to a minimum (must print the labels in a darker green next time though). Set up took ~ 5 hours, about 1 for the tiles, 1 for the terrain and 3 to lay out the troops (even with XY co-ordinates). 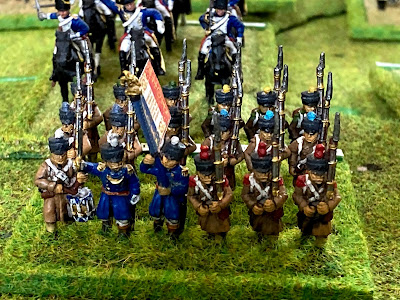 We followed the original 11am deployments as per Adkins - so the Grand Battery not yet out. Once the game started commanders were free to move as they wanted - with victory points for Divisions put out of action (but unbalanced, so French will lose if 1:1) and for any French Divisions off the table. Dutch/Belgians in Braine l'Alleud and the Prussians had a randomised arrival method, both in time and (for the Prussians) in space.

We used Steady Lads Steady, my in-house, grid-based, rules. Adrian and Bill had read up on them but not played them, Nick and played them but not read up on them! Will had never seen them (or any other historical set) before. Feedback was good and I think they gave a pretty good game. Long lists of mods to make, mostly minor. Biggest one is probably re-introducing musketry, but at 1MU/1000m only. QRS is only 5 pages, the only time we ever looked at the full rulebook was when firing the rockets. 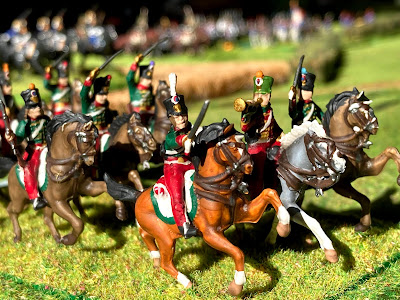 Nick and I both started keeping logs of what happened, mine lasted 1 turn, Nicks about 5! The game lasted for 18 turns and we were rushed off our feet throughout form all the visitors (see Converj - David's Blog: Waterloo60 - The Media (newconverj.blogspot.com)) so this will all be pretty high level, and really just an excuse to put some of the pictures up!

I decided to try a double envelopment, inspired by a comment in Elizabeth Latimer's "TALKS OF NAPOLEON AT ST. HELENA WITH GENERAL BARON GOURGAUD" where Gourgaud remarks  "The Emperor says he did not see as much of the battle as he could have wished. He intended to make, as he had done at Montmirail, a perpendicular attack, and to have led it in person, but the arrival of Billow forced him to remain in a central position.". Whilst "perpendicular" to me would imply straight up the middle Montmirail (11 February 1814) seems to have involved a double envelopment, so that what I went with.

So 6th and 9th Division of Reille's II Corps swung West of Hougoumont and started to head up the low valley on the flank, with Pire's cavalry catching the 51st as they tried to flee, and supported by Kellerman's II Cav Corps. The 2nd, 3rd and 4th Divisions of d'Erlon's I Corps headed for the Smohain valley, supported by Kellerman's IV Cav Corps. Lobau and the Guard were held in reserve.

II Corps did well to start with, the British falling back E of the valley, with a minimal screen to the N. In a rash move I offered to allow Wellington to call the 3rd Dutch Division from Braine l'Alleud early. With a more aggressive defence by the Brits the combined Dutch/British force was enough to block the French advance. Although the Tirallieurs of the Middle Guard and the Empress Dragoons were racing round to re-inforce it was too late and as II Corps evaporated the Middle Guard was left with the task of holding the British off of the French table. At ENDEX I think just one British unit has managed to push forward and survive. Hougoumont, having been vacated by the British as the initial French advance came forward ended up as sanctuary for a couple of battered French battalions until their Division got its orders to withdraw.

In the Centre I Corp's 1st Division pushed forward to Grand Battery ridge, but only took a few batteries with them. These were enough to hold the British in position and gradually force some of the Dutch battalions to withdraw.

On the French right under Bill's sterling command the rest of I Corps pushed hard for Papelotte, screening that and Fischermont and starting to swing round the British flank. Unit after unit on both sides got embroiled in the fighting, and as casualties mounted there would often be a single defeat that triggered a domino effect of failed morale tests to clear one side out of the other.

An early Prussian appearance just E of Fischermont forced I Corps to switch attention and gave the British enough breathing space to regroup. By ENDEX though the French still had forces almost on the British table edge. W of Papelotte at the head of the Ohain valley a bitter fight broke out along the hedgelines which proved hard to crack, only falling in the last moves to the British.

Apart from the Northern entrance most of the Prussians turned up deep in the Lasne valley. With VI Corps dispatched on the first warning to meet them E of Plancenoit the Prussians struggled to get out of the bottleneck - a few more northerly arrivals would have made a big difference. With the Prussians bottled up for now the Young Guard was sent to support VI Corps but by the time they got close 1st Division was pulling back and the YG went to support the hedges and the centre.

An ongoing activity was the firing of the British rockets - not that anyone expected them to do much damage, it was just a fun thing to do. Several fizzled on the pad, none went backwards and most landed a few 100m from their target in the French lines. One rocket actually landed just behind La Belle Alliance where Napoleon notionally was - but luckily no General casualties in SLS!

In the closing stages the British centre W of La Haie Sainte started moving forwards - their skimishers bothering the French guns. 5th Division pushed some battalions forward to protect the guns and send the rifleman packing, but then found the British line descend on them. The Voltigeurs of the Middle Guard had moved forward and formed a strong defensive line behind the guns. Again at ENDEX no British has pushed onto the French table.

We pulled stumps at the end of Turn 18. The French were basically spent, although they still controlled all of their table (except for Prussians), VI Corps and most of the Guard were unengaged and they still had cavalry roaming near the British baseline. The British though still had most of their centre uncommitted, had turned the tide their R flank, and were turning it on the L and Centre. So a marginal Allied victory was declared (yet to do the points calculation).

Overall I think things went really well. We'd mapped out 33 turns, but with all the interruptions, few players and most players not having used the rules I think we did well to get to 18. In fact given how much could happen in one turn I'm tempted to equate a turn to 30 minutes not 20 minutes at this scale, which would mean we fought to gone 6pm- but would also mean the "earlier" arrival of the Prussians. The Prussian arrival schedule was also a bit slow - despite good dice rolling.

The rules gave a good game, and the grid meant that no time was wasted measuring or arguing. The only thing really missing was short range musketry, as otherwise cavalry could pass squares and buildings unmolested, so I'll add that back in.

I've got various ideas as to how the set up the game differently next time we do it - potentially free set-up so as to make it easier to implement different strategies, the option of an 8am start, and perhaps the use of blinds to increase fog of war and also reduce set-up time!

The other Waterloo60 posts are: 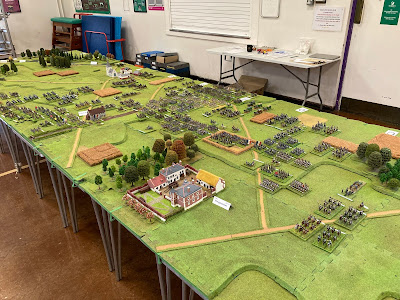 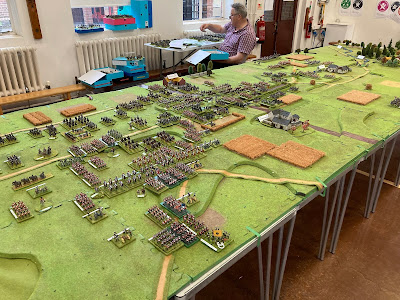 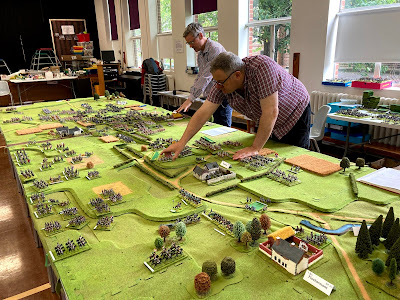 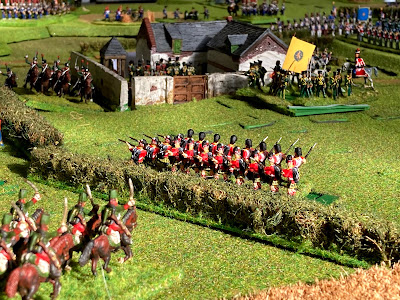 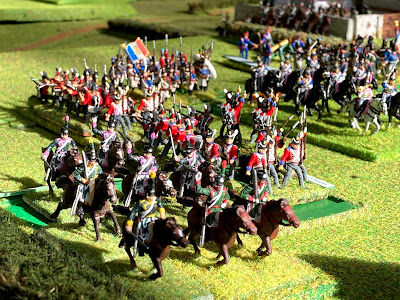 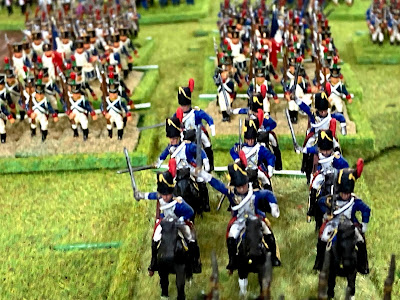 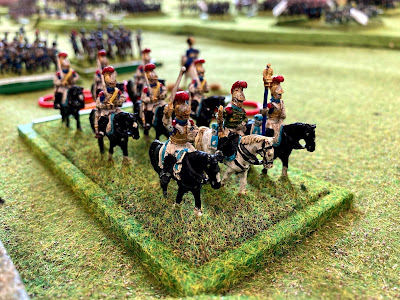 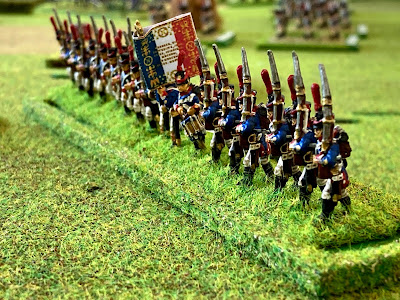 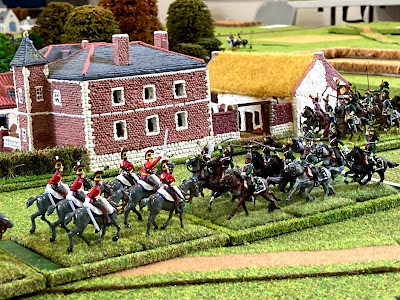 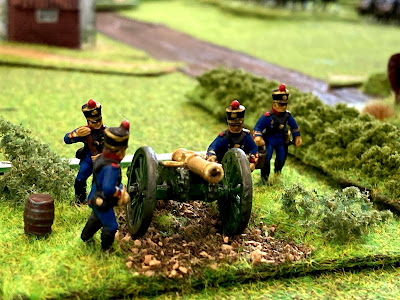 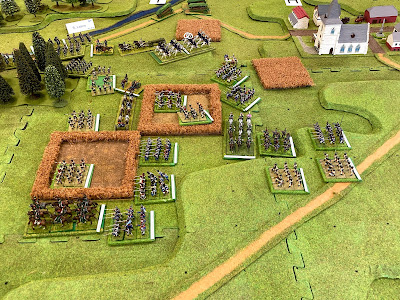 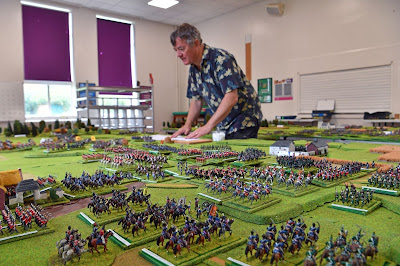