Seeing as it doesn't often get an outing, and as visiting the Bierges bridge over the Dyle, where Gerard was killed, last year had been quite poignant,  I thought I'd fight through both days of Wavre. 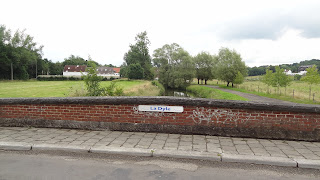 Rules were SLS, Battalion scale, with Hexon terrain at 200m per hex. Not my normal combination but the hexon terrain is just wonderful and so I wanted to find out how to use it at my normal 100m = 4cm scale for 6mm battalion scale games. I mentally treated each hex as though it had a front/back half, so each 200m hex had two 100m halves. It wasn't ideal, and would be a nightmare if played against a competitive opponent. Need to have another think as I would still like a solution to this. 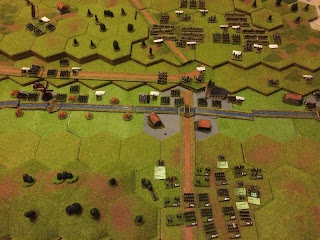 Starting positions, with Grouchy and Gerard approaching Wavre and the Dyle from the South (SE in reality).

Habert's 10e Div thrown against Wavre, but loses 3 Bn just from the 2 x 12 pdr batteries above the town, with many other battalions badly mauled.

Pajol's 4e Cav Div is racing down to the crossing at Limal, as an outflanking manoeuvre is looking like the only way through. Hulot's 14e Div has started engaging 5th Kurmark LW at Bierges, but making little progress. 1/34e of Habert's 10e Div was the first to try and force the Pont du Christ, but was repulsed by 2/1 Kurmark LW. Thielmann's guns are making little impression against the big Prussian battalions. Lefol s leading 8e Div towards Basse Wavre to put pressure on the N flank. 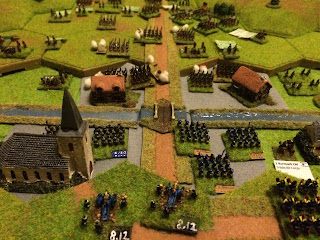 The fight around Wavre and Pont du Christ from the Prussian side.

Pajol's 4e Cav div has secured Limal and is pushing on beyond it, backed by 9e Cav Div. Hulot's 14e Div is in a prolonged struggle for Bierges but each assault is pushed back with heavy losses. The same situation in Wavre and Basse-Wavre where Habert's 10e Div and Lefol's 8e div respectively are also suffering for no gain. 11e Div is being sent S to Limal, as will be the just arrived 12e and 13e Div. Thielmann's has ordered Stengel to move against the threat from Limal, along with 1st Cav Div. 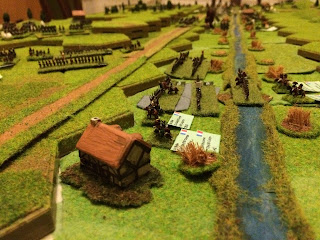 Forcing the crossing at Limal.

Day 1 ended with stalemate in Wavre and at Bierge, but the French pouring across at Limal on the SW edge of the battlefield. 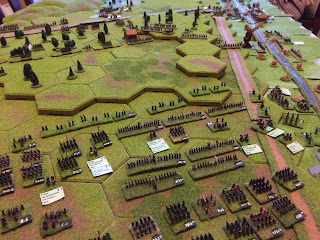 The French lined up early on the 19th of June, the day after Waterloo, ready to attack.

No write-up from Day 2 I'm afraid, but the French had overwhelming numbers. It was still a hard slog though, pushing the Prussians back into the woods, and trying to get around their L flank by following the ridge line above the Dyle. As news of Napoleon's defeat at Waterloo filtered through around 11am (game turn 9) the French were ready to push out of the woods and onto the Wavre-Lasne road, but there was still a strong defensive line waiting to meet them as they left cover and tried to regain order - so there's a good chance that the Prussian's may have been able to hold them off. 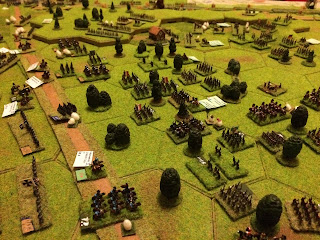 The last turn, the French (attacking from right), ready to break out of the woods and face the new Prussian defensive line.
Posted by David Burden at 07:00 No comments: