Spent an all too brief 90 minutes at the West Midlands Military Show. Good event, nice mix of stalls and games, although probably more of the former, and every stall appeared to have a related games across the aisle from it (not a bad move). Even though I only had time to buy 1 book, it was useful to get eyes on things I'd been thinking about from web sites, and to chat to a few people about rules and scales. Main findings were:

Bacchus 6mm vs Heroics and Ros 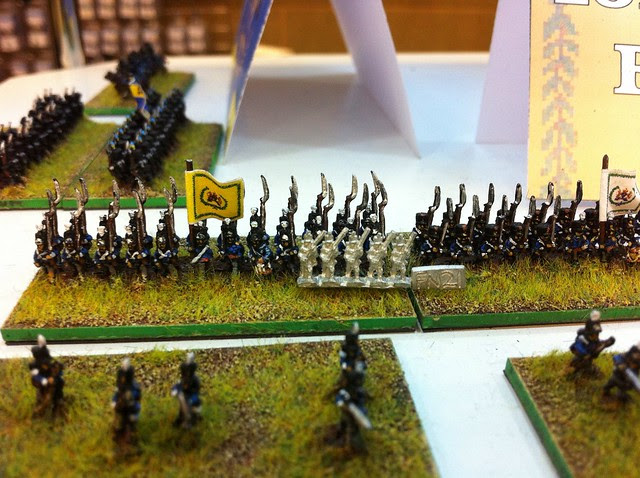 Having inherited 2 Divisions of French and some Russians by Heroics & Ros (thanks Alan!), and added 2 Divisions of Russians it's time to decide whether to stick to H&R or move to Bacchus. The Irregular Miniatures definitely seem a step down (and hard to paint with cav side by side), and I see what people mean about Adler size and heads. So it was good to be able to put an H&R stand up against some Bacchus.

The good news is that height wise they are a good match, H&R inf a tad shorter but not that you'd notice, cavalry almost spot on.. Bad news - 3 Bacchus figures have the same frontage a 4 H&R figures - the Bacchus figures are altogether chunkier. I had thought the H&R figures a bit thin, Bacchus are probably a bit fat by the same amount. This gives me a slight basing issues as I'd settled on 75mm base for 18 figures in line, and 25mm for 3 ranks of 6 in column, but with Bacchus I can probably only get 15 in a line (worse cased 12) and 3 ranks of 5, maybe only 3 ranks of 4. However since I'm not doing figure based casualties or fighting factor the figures are really only for decoration - and the Bacchus figures certainly look better - so I think I'll try them out for the British divisions I do after the Russians. 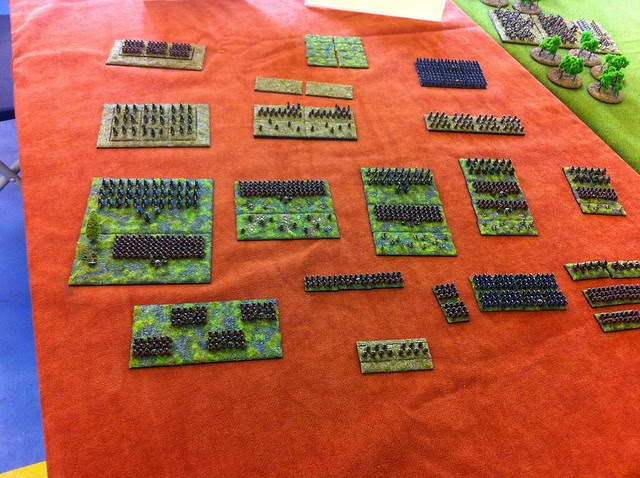 Opposite the Bacchus stand a nice painting demo/clinic for 6mm, sorry can't remember the guy's name. Really nicely done figures and a good chat about painting and basing. I do like the look of magnetic bases, and keep thinking they should sort the column/line problem, but of course column was at a variety of "orders" (close/quarter/half/open) and so the bases would never quite work unless you wanted to put your line on very narrow bases, or only have a very open column. Main tip I picked up was to use grey undercoat (or main colour of troops), then do a black in wash, and then only paint the non-blacks areas, and a final wash at the end. Worth trying with the Brits. 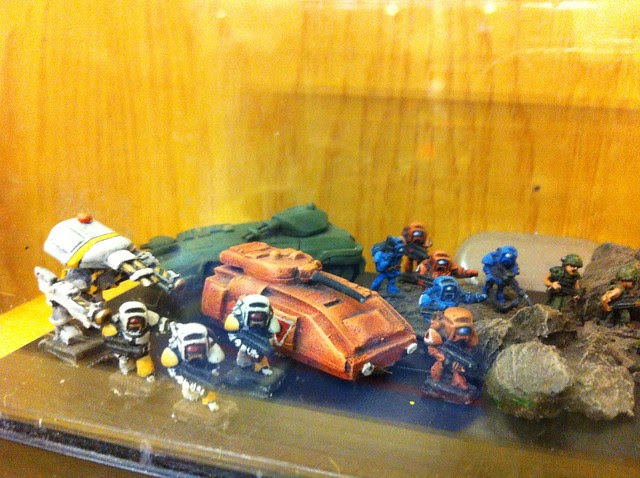 I'd still like to get in to SF gaming, but whilst 28mm seems best for skirmish I'm note sure what the best scale is for platoon/company sized games, or bigger. I've been using 6mm 1/300 for WW2 and Modern, but would like to see more detail for SF so 10mm may be the way forward. Pendraken had a few examples of their range on their stand, but would like to see more. And I can't stand "bug" and "blob" type aliens and combat walkers, so buying a blister pack was out. Perhaps they'll have more at Salute. 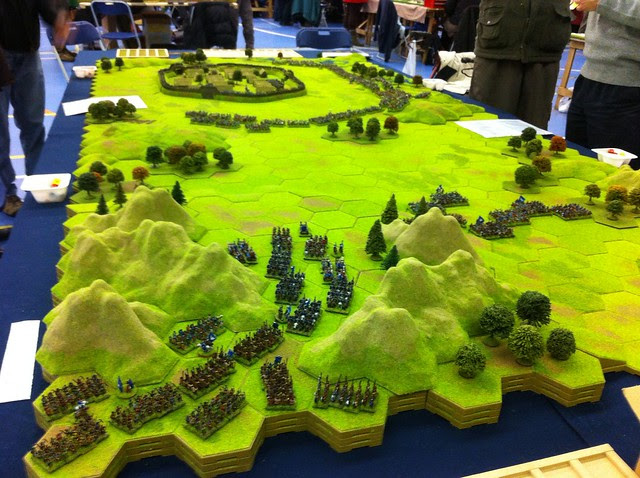 This was a very impressive hex terrain system, bet it costs a bomb. Far bigger hexes (100mm?) than the 40mm I've decided on, so probably better suited to a "measured" rule system or very large areas, and too costly/fiddly to do at 40mm, but very nice if you've the space and budget. Note the tiered bases to get the height differences.

Posted by David Burden at 13:13 No comments: