Battle of Roundway Down - AAR 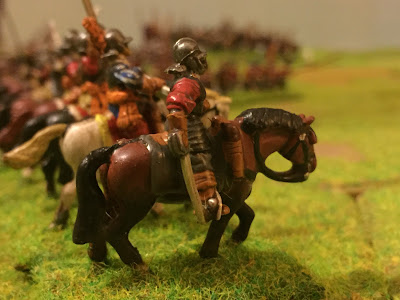 Still trying to catch up with 2018 (when I was meant to be playing 1643 ECW battles) I finally got Roundway Down underway. I ordered For King and Parliament as I set it up, but they hadn't arrvied by the time I was ready so I decided to play first with my own ruleset (still nameless, but based on SLS and I'm fancying "I die by these things"!).

As in real life the two cavalry wings charged each other and melees ensued. 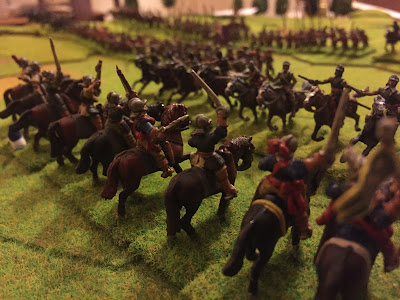 Units roll for quality only when they first need it - so you're never quite sure what they'll be like. As it was things were overall even, but Parliament had the upper hand on their left, but Haselriggs cuirassiers were (as in real life) up against it on the right. The right hand melee went 2 rounds with no result, so both units pulled back more or less to base line. On the left Parliament won, their opponents fleeing away off the board. 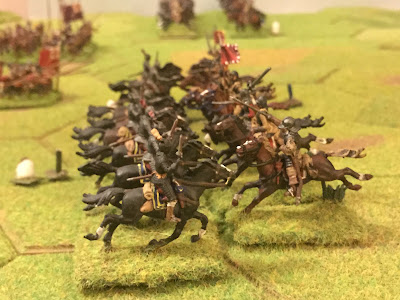 The Lobsters about to come off worse

The fleeing Royalist cavalry put a bit of a dent in the third Royalist unit, but as the Roundheads gave chase the Royalist horse steeled itself to intercept and give battle.

The melee went Parliaments way, and the already nervous Royalists horse fled the field. And that was enough to send the third unit home too. 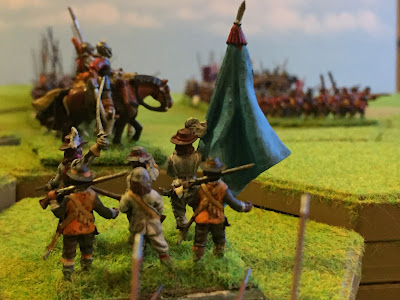 Just then Hopton's forces arrived from Devises, but with Parliament in control of the field and still with plenty of Horse around, Hopton thought better of it and fled back to Devises before they were spotted!

All the Parliamentary infantry could do was it around looking pretty! 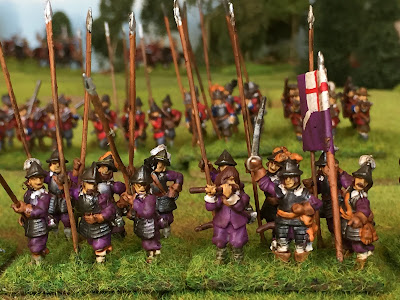 So the flip result to real-life, but perfectly believable. However as a wargame it was certainly lacking something as it was all about how those two cavalry melees went. As such it's probably not a good battle to test FKaP out on (which still hasn't arrived).

It just so happens that the next game off the cab-rank is Adwalton Moor. Looking ahead Newbury also looks a far better battle that I though it might be, so let's run with the ECW strand for a few weeks. I'm not busy setting Adwalton Moor up and should start that this weekend, I'll play with "I die by these things" (?) first (which are shaping up pretty well at the moment, 90% there I think), then FKaP (all at 20mm), and then do Newbury with both, probably both at 6mm. 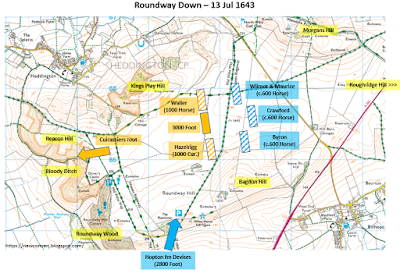 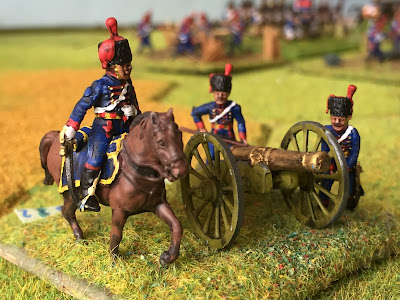 WHEN OUT:
BKC4/CWC4 - will it ever come?
Battlegroup NORTHAG 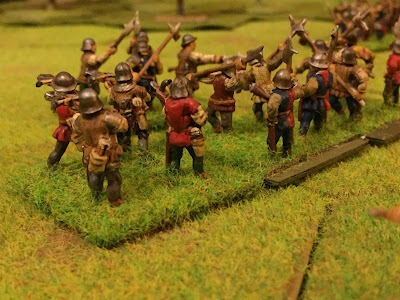 I finally got around to playing Bloody Baron which I bought some time last autumn in my search for a good set of Medieval rules. Since they were stand based I knew they were unlikely to be a winner for me, but as many others have said they do have a nice pre-game section. Mind you rolling about 144 dice (!) to do it seems a bit much! The results of the pre-game were:

In summary the Yorkists advanced on the Lancastrian line. On the flanks both sets of bowmen got to grips with each other (the Lancastrians having found their way through the wood). In the centre two groups of opposing billmen rapidly came to blows. A fairly drawn out struggle then ensued with lots of rounds of no hits or all saves. The turn countdown (nice feature) progressed quite rapidly. Both sides lost a bow unit (on opposite flanks) from enemy fire (the Yorkist one going in one turn), most Morale rolls resulted in no result until a Lancastrian unit routed in one turn, the battle in the centre ground down til only 3 stands were left, and by the time the clock ran out the Yorkists were up by 2 units but only 1 actual stand (the final Lancastrian reinforcement having only just arrived!).

It was a fairly small game, needed to be at least twice the size for flavour I expect, but it did give a chance to test the rules.

So not one I'll play again as a whole I expect, but may well steal a few ideas. 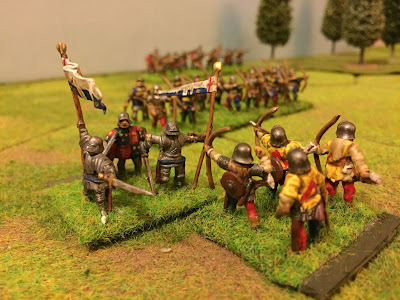 I was hoping to then play The Perfect Captain's Coat of Steel but a) the rules looked incredibly context and b) Deborah needed the table for a meeting. Might save Coat of Steel for a retirement project as it looks like you need the time to immerse yourself in the milieu - which is probably also true for Bloody Barons. 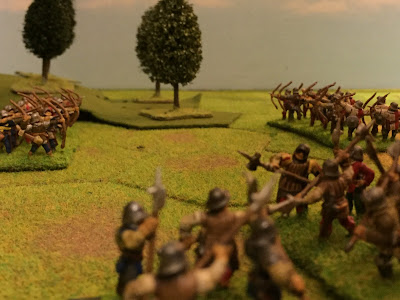 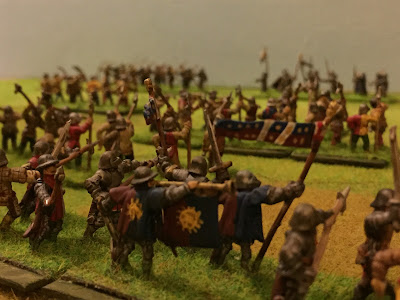 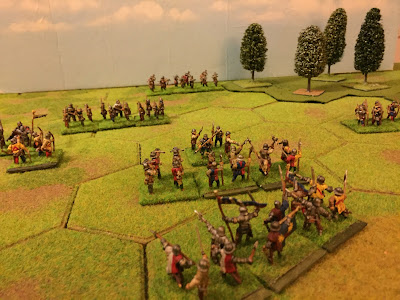 Posted by David Burden at 13:00 No comments: 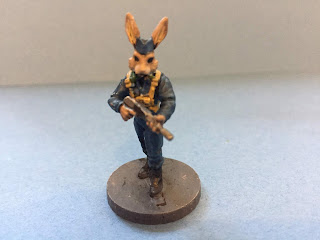 The original plan called for 3 sessions (months) on each of 20mm Napoleonic, 20mm ECW and 20mm WOTR, each of 3-4 units. As it was I only completed the Napoleonics (contractual obligation - see below) with 2 each for ECW and WOTR. I find both those two hard going as a) the figures are mostly just shades of brown and b) you have to think so much about which shades of brown to use to make it look random. I'd hoped to do a catch up session in December for half-and-half WOTR and ECW but was later starting the Napoleonics and they take priorty (and still wont be finished by 1 Jan).

However alongside those were: 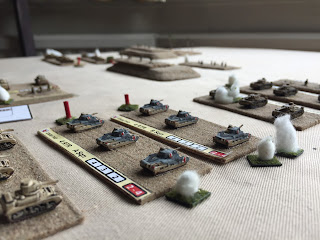 2018 should have seen 2/3 1798/1808 battles, but in the end was spent catching up on the 7's battles as I managed to do only Friedland. Bailen and Vimiero get pushed into 2019, which has lots of its own 9's battles to do as well. I did like trying a different rules set (Snappy Nappy) for Friedland, and will probably alternate SLS and others in 2019. 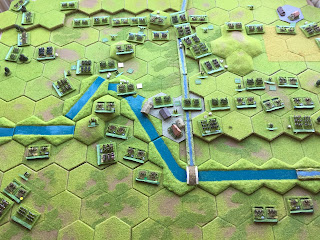 ECW fared no better with only Hopton Heath being done (with Warlord Pike & Shotte), and Roundway/Newbury/Adwalton being pushed on. 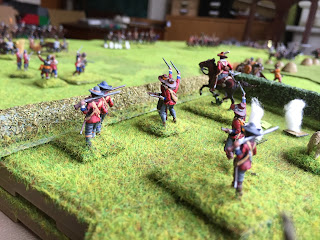 Campaigns and Other Battles

Stalled a bit here. Nick and I had the 1st and 2nd Battles of Sombreffe as part of the 100 Days campaign, with Alan sadly dying between the two. Still need to finish the campaign, but both sides are now fairly brittle. 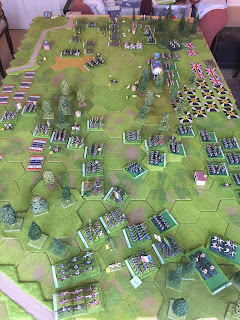 Slightly more successful here. My rule is to not buy a new set til I've played the previous one, so I bought and played for the first time IABSM, Rommel, Snappy Nappy and Black Ops. 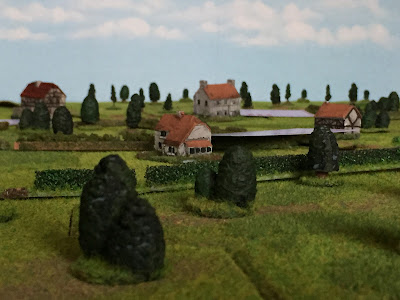 Of course the last one was part of my mega-skirmish test which got out of all proportion and is responsible for lack of progress elsewhere. The table had basically one set-up on it from August to December! I did though play 12 different rule sets!

Albedo Combat Patrol 164 came totally out of left-field - I never expected it to happen, and was almost surprised that there were other gamers around with found memories of the comics and the old RPG game - thanks Chris for making it happen. And it meshed neatly in with my modern/SF skirmish try out (Buck Surdu's Combat Patrol rules were on my list). Looking forward to the full rules and the rest of my figures in 2019. It may also have pushed me up to 28mm for some skirmish gaming - yet another scenery scale to get. 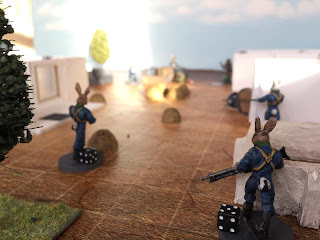 Managed only a couple of trips to Worcester and Powick related to the AR app I'm working on.

Other bits and bobs:

So apart from the lull in games, especially mid year, not too bad a run. Roll on 2019!

Email ThisBlogThis!Share to TwitterShare to FacebookShare to Pinterest
Labels: wargaming 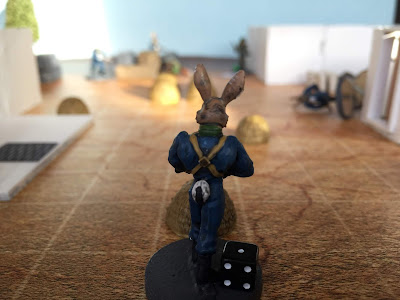 Finished off the Albedo ACP164 introductory scenario. Stayed with the v1.1 beta ruleset even though I got the v3.7 draft full set mid-game. Read the initial set-up blog post for background.

The EDF guys were perhaps a bit over ambitious, but there orders were to patrol forward, not to wait to be attacked! Due to poor sight-lines both sides saw little til they were almost on top of one another. An EDF critter spotted the ILR gun crew dashing across from one building to another, rolled a successful interrupt, but got an out of ammo card. The ILR crew could now lay down enfilade fire with their LMG on the flank/rear of the most forward  EDF critter who soon went down. The first EDF critter has reloaded in time to see the ILR boss poke his snout out, but got another OOA! The ILR #2 on the LMG dashed forward, and managed to get to the EDF critter who was busy reloading, and a brief melee saw the second EDF critter down.

The EDF commander had amassed a handful of morale chits, and on their activation rolled for the lot but for no negative effect - in fact she was ordered to engage the nearest enemy - just as well as an ILR rabbit was now bearing down on her. Another OOA! ILR took their shot and the boss went down. Paddy, the remaining EDF critter, then remembered an urgent engagement with a bone and the game was over, for no ILR loss.

The game played out pretty well, just a few observations:

Time for some other gaming now, and then back to ACP164 to try the beta rules out in a while.

Posted by David Burden at 14:15 No comments: