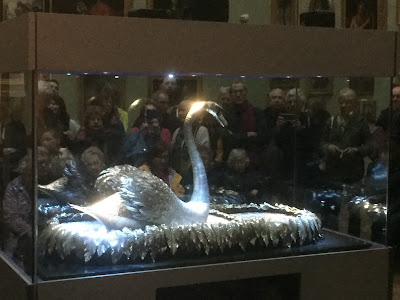 A few years ago the Science Museum had a nice Robots exhibition. Whilst the modern robots were interesting the most fascinating thing was the "writing boy" C18 automata. They had also had the Bowes' Swan for a while but I missed it. With my daughter up in Durham I promised myself a trip, and finally saw the swan play on Sunday. I's a bit of a "blink and you'll miss it", I guess its less than a minute but the movement of the head and neck as it looks around and then drops down to "catch" a fish is wonderful. All driven by clockwork and a toothed brass disc. 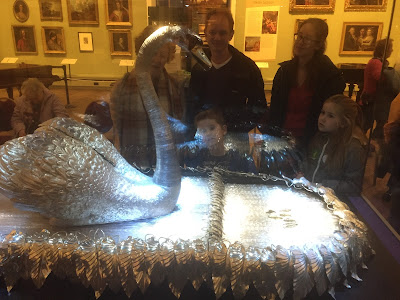 The other really neat bit was the "water". This was a series of glass rods, each with a different "screw" spiral on the outside, all being rotated giving a wonderful impression of flowing water.

Well worth a visit (and the Museum also has a well known painting of Napoleon), and I'd certainly go again and be more ready for the short duration of the animation. It plays at 2pm every day. 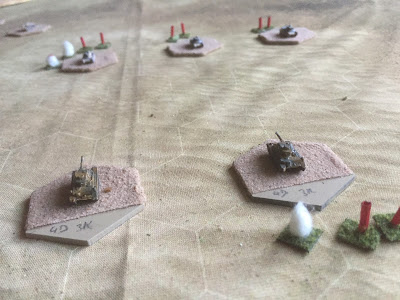 After the somewhat abortive test of CWO in the desert with Nick I decided to run another scenario - paying closer attention to gun ranges this time.

Each element represented a Troop, so there was about a Tank Regiment/Bn on each side. I'd reduced the number of cover categories and rebased the to hit/spot rules, and also simplified the penetration calculation (and made it penetration not save). 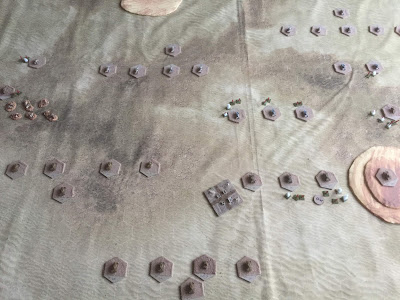 The game played a lot better this time, with the roughly equally matched sides exchanging a couple of squadrons each before I called a halt. The British Crusaders were just completing a flanking move round the hill, but the freshest Panzer Kompanie had gone to intercept.

Much as I love the look of WW2 Desert I'm not sure it actually wargames well - just armour heavy and a lack of cover, or a slogging match like El Alamein. Back to Normandy for a while I think... 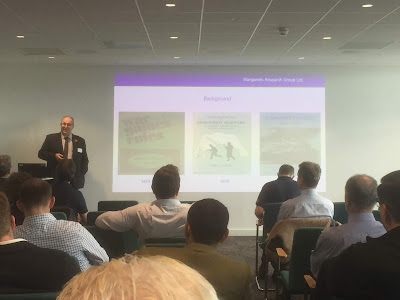 Isn't it great when day job and hobby come together. I knew I was at the right place when one of the first slides someone put up (actually Steven Bowns from Wargames Research Group) was of the three editions of WRG's Modern Warfare rules, the same rules I cut my modern wargaming teeth on back in the 70s/80s, and the three of which still sit proudly on my bookshelf!

The event was the Defence Science and Technology Lab's show-and-tell on Defence Wargaming. We (my company Daden) were luck enough to get a demo and talking slot.

For the occasion I updated the Virtual Wargames Room (our 3D Virtual Tabletop - 3D VTT) we built in Trainingscapes a year or so ago. The new version was optimised for the Oculus Quest (which meant the hex board and model soldiers had to go).

Within the space we had:

One of the whole aims was to keep it very simple. Nothing is automated, it works just the same way as though you got a physical wargame out on a real table (and we even had people knocking things off the table as in real life, and picking them up to keep the place tidy afterwards).

The whole day gave a good insight into some of the companies working in the professional wargaming space (or with aspirations to work there), running the whole gamut from machine-learning AI based systems to good old paper and card wargames and PIP dice for unit activation. There was also a good presentation on the current MOD needs in this area, so hopefully we'll get the chance to progress some of the ideas we presented a bit further.

This is the second "professional wargaming" event I've been two in the last 2 months, and I'm missing a third at the end of the month. It's fascinating how there is a huge resurgence in wargaming in the military community (it was a dirty word when I was in), and I can't wait to see how the recreational and professional sides (continue to) interact.

I'm hoping to actually get the 3D VTT to a state when it can be used for a real game over the next few months. If you've got access to an Oculus Quest or Rift and might like to take part then let me know. We might also do a simple 3D session as well where anyone with a decent PC can play - again let me know if you're interested. I might even take it out to COW, or possibly one of the local shows.

Posted by David Burden at 12:28 No comments: 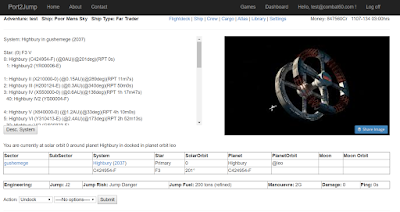 This image may look no different to one I posted a month ago but it represents a big step forward as the software is now running on Microsoft's Azure platform. What this means is:

It also means I can now got back to actually writing the functional code for Port2Jump, as well as some nice bells and whistles like WebGL 3D graphics!

Posted by David Burden at 14:07 No comments: