Starship SN8 was finally assembled early on Friday morning (c. 0100 UK time) - bit annoying as I'd stayed up to midnight just before hoping to see it! Awesome photos that morning - screen-grabs from LabPadre's YouTube stream. Can't wait to see the 15km hop.

Posted by David Burden at 17:38 No comments:

Seeing as I'm in tidy up mode on a wet semi-locked down Saturday, I've also done a summary page of my Napoleonic games.

Posted by David Burden at 17:31 No comments:

Beginning to lose track of which rulesets I've played and what I've though of them, so posted up a consolidated list which I'll try and keep up to date.

Posted by David Burden at 17:29 No comments: 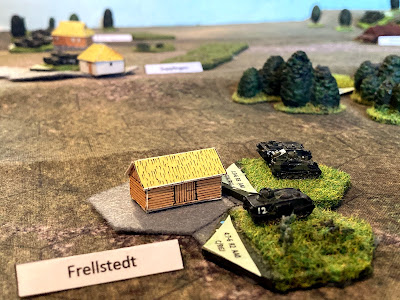 Whilst my Combat Wait Out rules are developing OKish for games with Bn and smaller forces I've always wanted a more "operational" set for playing Bde and maybe even Div level engagements (shades of SPI NATO Division Commander). Brigade has always hard a particular interest for me having spent 2 years at 24 Airmob Bde HQ, and in the last few months I've actually also been wargaming with our current 3 Div brigades. That plus holiday reading the other week of Russell Phillip's The Bear's Claws and Harvey Black's The Red/Black Effect meant I was keener than ever to get something on the table.

The rules I developed for my BAOR game earlier in the year (on the SPI map but rules developed from FreeHexBlitz) seemed to work pretty well, so I've refined them for play at Bde rather than Corps level - but the aim is to have the same core rules deal with Bde to Corps.

What I want on the table is something that is not a million miles from an SPI style game with figures. I've got a nice 4cm hex cloth, and all my 1/300th are mounted on 4cm hex bases, so half way there! As ever getting building scales is hard, proper 1/300th is too big, Brigade Models 1/1000th too small! Actually some old 1980s Heroics and Ros cardboard buildings were not too far off! In future I might try with 2mm models and then the 1/000th might work well.

At this scale each hex is 500m. Units are represented 2 down, so for a Bde game the manoeuvre unit is the Company.

I don't like the SPI CRT ratio approach, and "my" BAOR/FreeHexBlitz  rules gave each unit:

In combat a unit rolls the number of D10 equal to current size, with a TN of the Attack or Defence value as appropriate, looking to roll under, with TMs, and scoring hits (size reductions) for wins.
The BIG change from the BAOR game is the introduction of logistics. I think I've found a neat way of playing this, and in fact combining with activation - but we'll see how it plays. The idea is that each Unit (ie Bn) gets 12 log tokens, although held at Bde. On a turn to activate a Unit you need to spend 1 Log to move it and/or 1 Log to fire it, and/or 1 Log to go into close assault. You can also spend upto 1 more Log for a +1 in fire. The idea is that the initial allocation represents F echelon on vehicle/man stocks for 6 turns. You then drop into A1 Echelcon for the next 6 turns where you "might" get 2 Log per unit per turn, but interdiction and foul-ups might stop that. Then form turn 12 onwards your into A2 and a full log load becomes unlikely. We'll see how it works!

Here's the table set up showing the valley between the Elm and Lappwald hills from Konigslutter to Helmstedt. 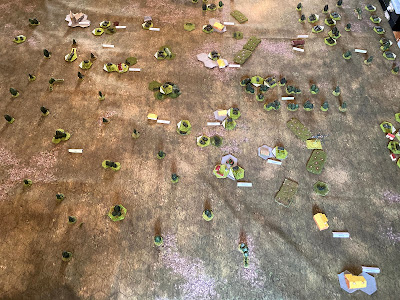 Need to find an easy way to show roads! Note also that the hex grid just disappears at any reasonable distance.

And here are the two opposing forces 1 RGJ Battlegroup and 62 Guards Tank Regiment lined up on the parade squares ready to deploy.

Will report back once I've played a few turns. Working title for the rules in FRAGO!

PS. Would also like to try out the WDG megablitz rules, and just as I started writing this the latest TooFatLardies video was previewing Dave Browns new 'O' Group rules for "Battalion and up" - but they look more Rapid Fire style but potentially with some nice mechanics.

Posted by David Burden at 14:09 No comments: 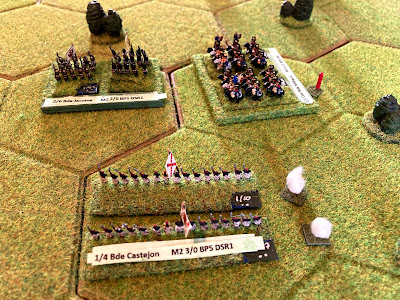 Having bought Shako about a decade ago as I got back into wargaming I finally got round to getting it on the table - at least the large battle version. I've often described SLS as being "Shako-like" based on the read of the rules - now I'm not so sure! 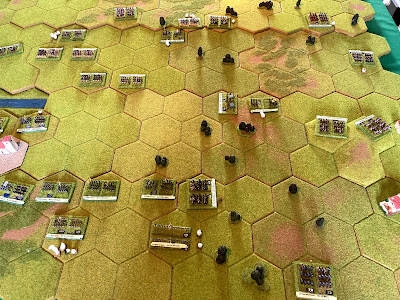 The game still played out pretty much the same was as in reality and in SLS, French cavalry pummelled the Spanish cavalry and then came to the aid of the infantry. All over (i.e. 50% breakpoint) in 6 turns, 2 more than SLS but probably played more quickly (~2hrs cf 3hrs). The fights were also not quite so decisive, and seemed a lot more bitty, the Spanish infantry and cavalry having a few more wins against the French, and not crumbling so quickly, but not enough to change the ultimate result. 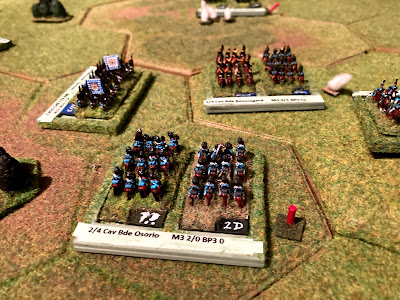 Spanish Cavalry in the Attack for once!

Overall though whilst I found the Shako rules pretty straightforward and playable, I did feel that there were some crucial things missing for the type of game I want to play. My main issues were:

Skirmish rules worked OK though (quick 4+ per outscore), ditto artillery and rallying (although no ability to actually rally kills). 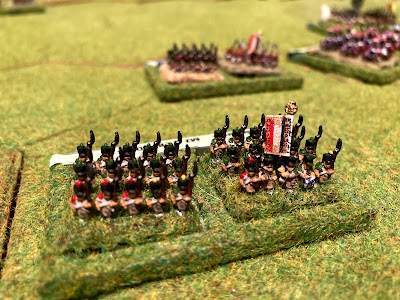 French Infantry advance to victory!
I'll certainly give the normal scale rules a go some time as they look to have a bit more finesse, but I think the basics are the same. I also understand that Shako2 doesn't have any big changes, so probably not worth buying to try instead. Certainly more to my liking than Black Powder though. 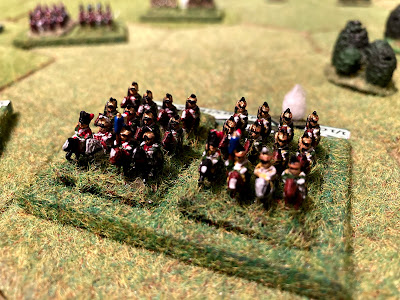 Victorious French Cavalry
Who knows I may even get GdB on the table some time!
Posted by David Burden at 13:51 2 comments: 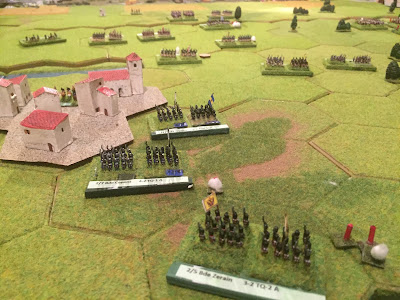 Scale of games steadily going up in the new War Room. Looks like Ocana will be my only decadal game this year - and it's a year late! I used the Grand Tactical version of my Steady Lads Steady rules, with Hexon terrain. One hex is 200m, and manoeuvre units are brigade sized.

The battle followed the real one pretty well. French cavalry under Milhaud was quicker off the mark, and supported by Paris made short work of the unreliable and fragile Spanish cavalry. SLS's resolve tests and morale tests worked really well, initial Spanish defeats rapidly become a rout. In the centre Werte's Poles got a bit ahead of Leval's Germans and suffered as a result. But the Spanish didnt have enough time to exploit before the French cavalry came crashing into their flank. On the Spanish left Zayas and Rivas did have a chance to cross the ravine and counter-attack but (probably wisely) didn't take it. The whole things was over in 4 turns - 2 hours - can't find the time for the real battle. 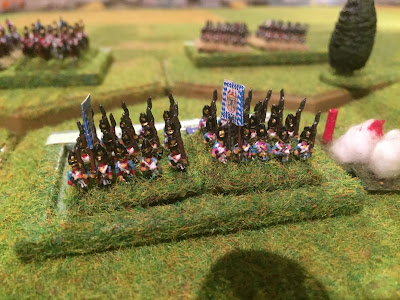 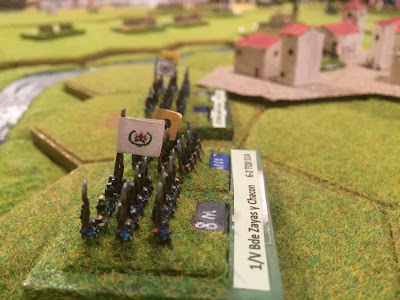 Zayas waits on the left flank with Ocana in the background 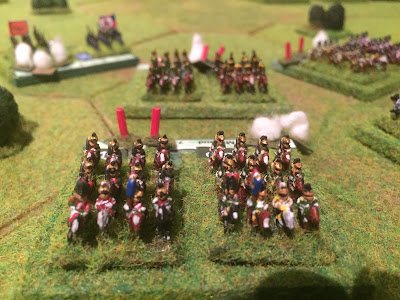 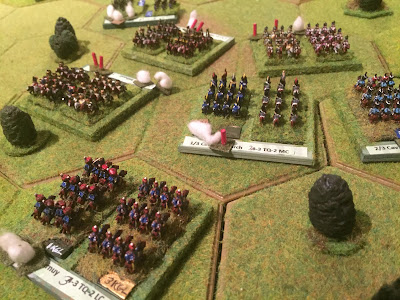 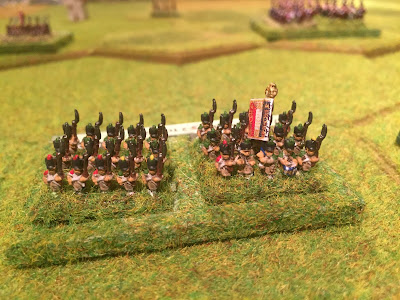 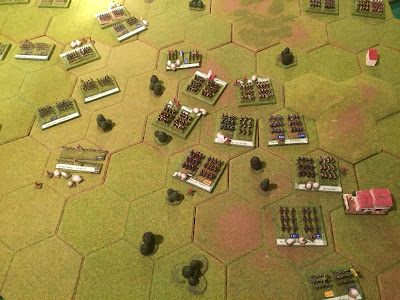 Long shot of the melee 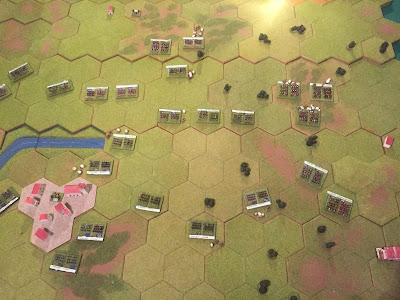 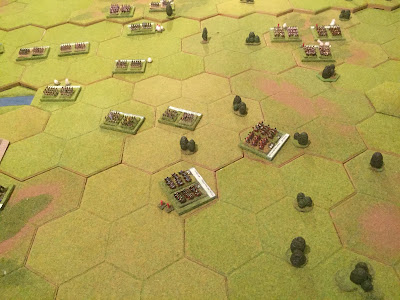 ENDEX - lots of empty space for the French cavalry!

The rules worked really well, best game I think I've had with SLS-GT. Particularly impressed by the way the cavalry conflict played out. The main changes in this game were aimed at streamlining SLS for megagame play (in prep for Waterloo60), principally:

Next up, play Ocana with Large Shako since its on the table, and then try the SLS mods out on the normal Battalion manoeuvre game.
Posted by David Burden at 14:03 No comments:

This War Without an Enemy arrives 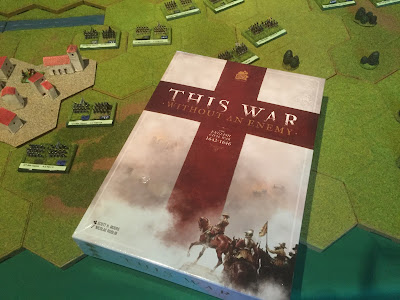 My copy of the This War Without an Enemy Kickstarter boardgame arrived, made by local designer Scott Moore and published by Nuts! Publishing. Can't wait to get it on the table. (Table currently occupied by the Battle of Ocana!)

Posted by David Burden at 08:55 No comments: 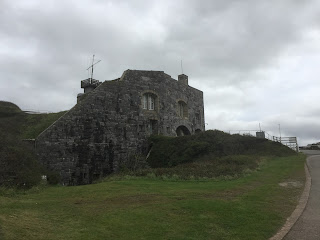 Least Impressive Side of Tregantle Fort

Lovely week walking along the South West Coast Path with friends - first day torrential rain but improved after that. Only blog relevant item was walking past Tregantle Fort - one of the Palmerston Forts to protect a landing and land attack on Plymouth docks by the French in the 1860s. There was also some nice smaller Napoleonic forts on the side of the Sound itself, and a central barrier and sea fort which I assume was to force ships onto the shore batteries.

The other plus point of Tregantle was its now an Army rifle range so you got to see 300mm and 600m laid nicely out in front of you! 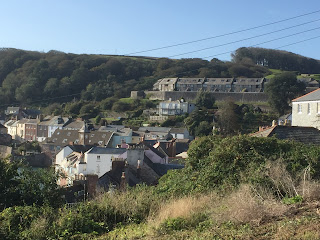 Posted by David Burden at 08:59 No comments: 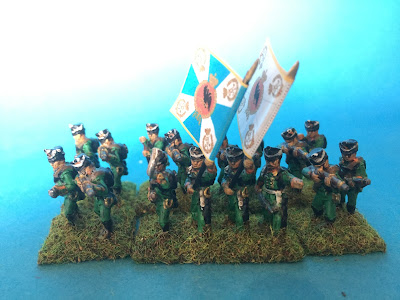 Russian Jaegers
Having completed the French for Waterloo60 it is time to move on to a new Army. I started a Russian Army in plastics probably 7-8 years ago, but parked it when the Waterloo60 project got underway, so now its time to return to it. Figures are Newline and first up are a Jaeger Bn, 2 Musketeer Bn and a Grenadier Bn. Looking forward to a sea of green instead of blue! 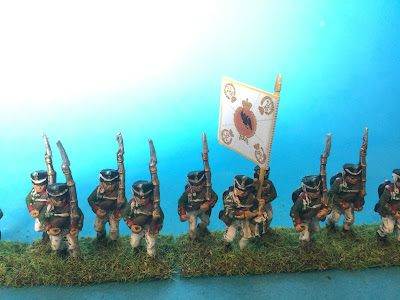 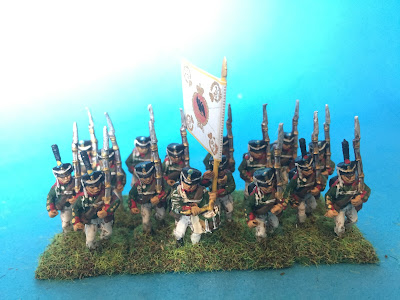 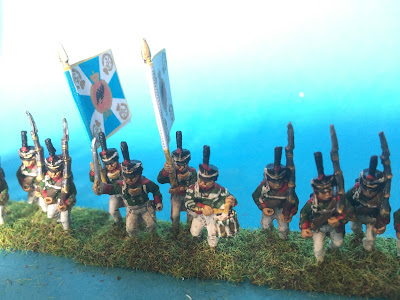 Russian Grenadiers
Posted by David Burden at 08:48 No comments:

ACP164: Dead Rabbits (and other critters) 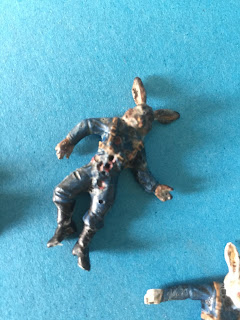 Playing the ACP164 Lockdown campaign earlier in the year I half joking suggested to the group that we needed some dead rabbit figures (I hate the look of tipped figures in skirmish games). Chris saw the opportunity and so now we have a range of dead critters to buy! I bought 6 ILR and 6 EDF, and had great fun with pliers bending arms, snapping legs and then with a drill making bullet holes!

Rumours are that the campaign may restart which would be great, and a chance to use the figures - and there's the boarding action Kickstarter imminent. 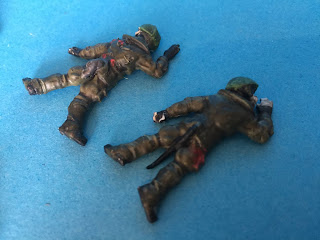 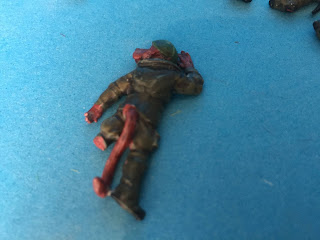 Posted by David Burden at 08:43 No comments: