I've had this sat on the table ready to go for a few weeks, but finally got started last night. I'm playing it a Brigade scale, so manoeuvre units are Brigade sized, and the only artillery shown are Army and Corps assets. Figure scale is 6mm (my normal Bn units in Bde sabot bases), and hex scale is 10cm hexon at ~ 300m per hex.

The rules are the "Grand Tactical" version of Steady Lads Steady. The same core mechanics but a bit of simplification and abstraction. In fact I've abstracted a bit more since its last outing, partly as a result of playing Blucher a bit. The main differences between SLS and SLS-GT are:


On the logistical side I've also now got a slick spreadsheet to go straight from Orbat to unit labels!

The game opened with the Guard Grand Battery blazing away the Prussians W of Closewitz and the fell back before the infantry of V Corps could make contact.

V Corps advanced across its front. It took a couple of turns to remove the W most Prussian units in the woods - no melee but a succession of adverse resolve checks on the Prussians, but with the French refusing to actually close to melee (which is the way SLS is meant to work, so nice). 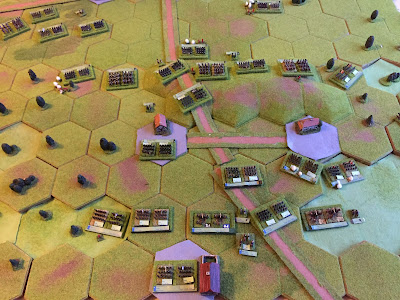 It also took 2 French Bde on the E to get into Closewitz, but they did close to melee and routed the Prussian defenders.

At the end of turn 3 just the remaining Prussian Bde in Luterzode to remove to establish the first French line and clear space for reinforcements. St Hilaire's Bde of Soult's IV Corps is also pushing forward to the NE of Closewitz so we're not far off on the historic timings. The Prussians are making a move to defend forward though.

Posted by David Burden at 13:46 No comments: 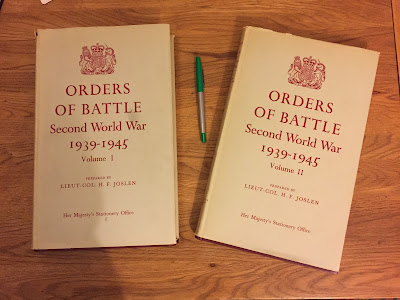 A nice find at the local Oxfam bookshop - a 2 volume set (foolscap I suppose) of the official HMSO description of the British Army orbat for the whole of WW2! 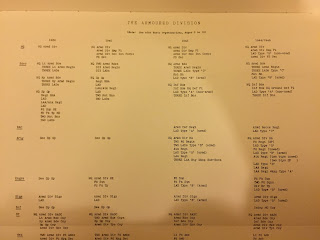 As well as more "conventional" organisations, the books also have things like who were the garrison units in all of the out of the way places across the globe who probably never got around to firing a shot! 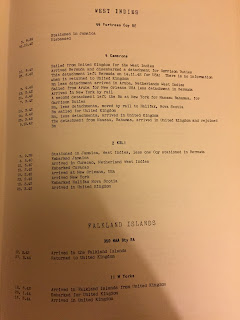 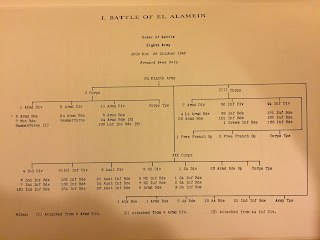 Posted by David Burden at 13:22 No comments: 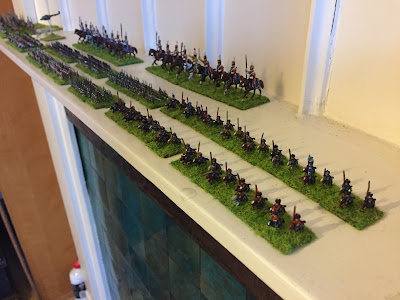 The table is currently being set up for Jena so I'm afraid these guys will only get the mantle-shelf treatment.

My first batch (about 1/2 a Corps) were some of the first Napoleonic 6mm I painted and were some donated Heroics & Ros (thanks Alan again!). So it was nice to round off my c.4 yrs of bulk 6mm painting with another 1/2 Corps of Russians, but this time from Baccus. 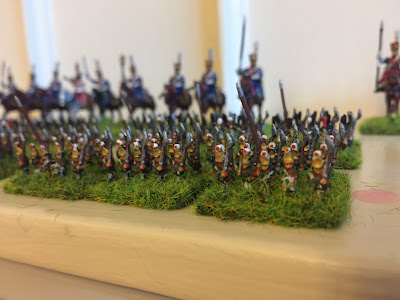 Six battalions of mitre'd Grenadiers - Pavlovsk and LiebGrenadier. Blame Peter for only selling them in packs of 96! 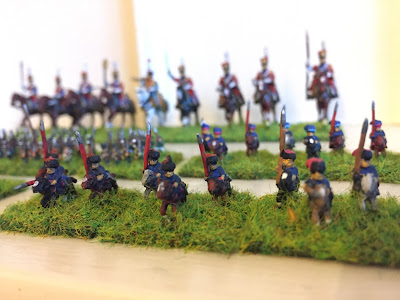 Normally I have 12 cavalry in close order on a base. For the Cossacks I decided to go with 1/2 sized bases and only 3 per base - so I think that gave me 8 regiments worth! Painted one as Guard Cossacks and another as Bashirs. 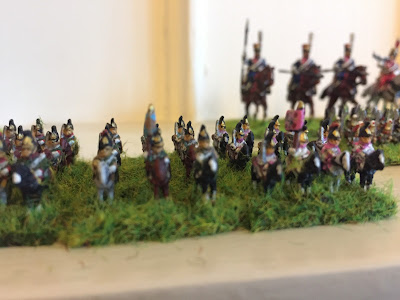 Four regiments of heavy cavalry, two as Dragoons and two as Kuirassiers. 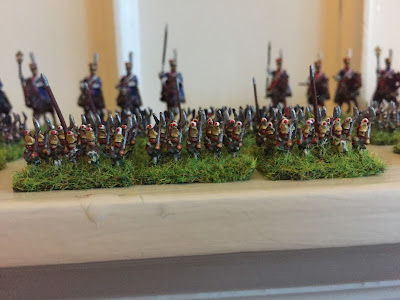 The LiebGrenadiers again (its the red disc at the top of the mitre to tell the difference!) 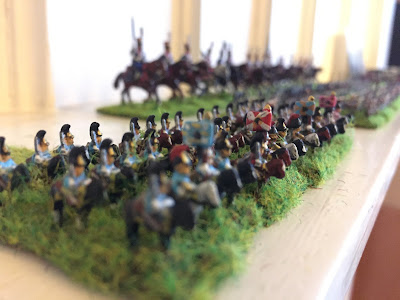 The other end of the heavy cavalry line-up.

There were also 6 battalions of Musketeers (2 each of Tobolsk, Volhynie, Kremenchoug facings) and 3 of Guard (2x Preobrazhensk, 1 x Semenovsk) and 3x Grenadiers with Kiver (Kiev, Moscow, Astrakhan facings I think).

As mentioned that bring to the end my "bulk" painting of 6mm Napoleonic so I now have about 2-3 Corps of French (+Guard), 2 of Prussians and one each of British, British Allies, Russian and Austrian.

The aim now is to paint a "batch" (~30 units) every year of "fun" stuff or to fill in gaps - but that will be shared with ECW and Medieval. Some more Spanish seem to top the list at the moment (esp the guys with the long tails on their hats!)

Posted by David Burden at 13:47 No comments: 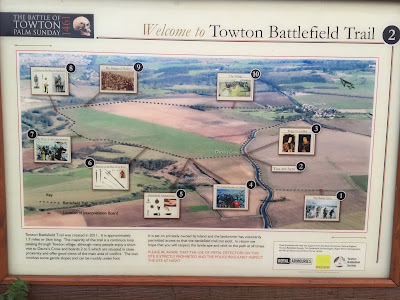 Heading back from dropping elder daughter off at Durham, and seeing as the dog needed a walk I decided to go and take a look at Towton as it's only about 10 mins off the M1/A1(M)/M18. We left it a bit late, and a huge rain storm had just been through, so every thing was wet, muddy, and eventually dark! 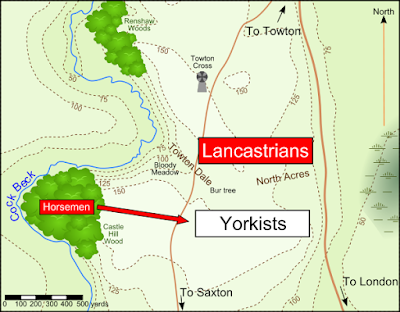 An official walk was set up a few years ago with 10 information points. Unfortunately its really around the rear of the Lancastrian position, so apart from the spur out to Point #2 in the middle of the Yorkist lines you cant really walk over the big field in the middle of the road fork, so the Towton Dale/North Acres area where most of the fight would have been.

The walk is on a reasonably well kept wide path between fields and is about 3km. It takes you from the cross along the edge of the Cock Beck, and then into Towton. We turned round at #9 as I didn't want to bring Paddy back along the road in the dark (the roadside path was more or less impassable).


In the image above the lone tree is just behind the York centre. Not really evident in the photo is that there are 4 (4!) major power stations visible on the horizon - including Ferrybridge (the sight of the skirmish the day before). It probably just highlights how empty this area is! 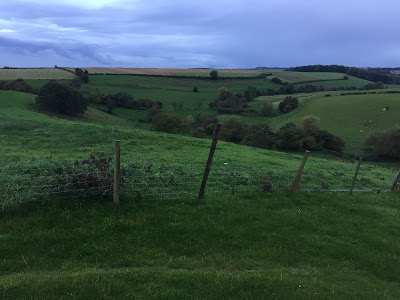 The real take-way from the walk is how deep a gorge/valley the Cock Beck is in. This image shows the start of the drop - and you can easily see how routing troops in moderate armour would soon be toast as they slipped and slid down a steep muddy bank. "Bloody Meadow" is more or less in the middle of the photo. 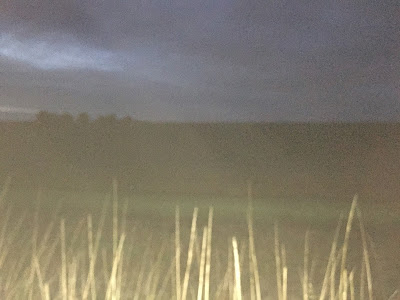 It was getting dark by the end! This is from #2, looking from the Yorkist centre to the Lancastrian lines. Towton dale which cuts across from L to R is quite pronounced, and this was only just up the S (York) slope, so the view N towards the Lancastrian lines was very limited - my guess is that the main York position would be further S up the slope so as to get a better view - which matches the battle diagram above rather than the board description. Again the slope being quite pronounced would have readily facilitated a field of carnage in the dale with muddy ground and lots of armour.

Overall whilst a quite minimalist site its really is an atmospheric place, and when we visited it probably as bleak as it was on the day!

Posted by David Burden at 13:48 No comments: