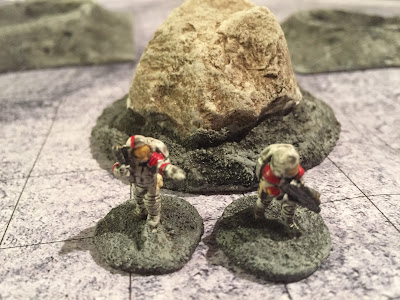 With the table laid out for 15mm Moon combat I decided to try a couple more rule sets. First up was the Dark Side of the Moon set used at Salute in 2019 (I think) and later published in MW&BG (#440).

I had to invent a few things as the QRS gave no idea of distances or ranges, and the colour code/icon style whilst great if someone has briefed you on it took a bit of decoding - but I think I got the game right in the end. The only real recognition of being somewhere else was the "dust" marker with movement. Activation is by unit, each side "bidding" with a playing card for their hand for first move of the pair. Works OK. Combat is a Risk! style dice matching, with extra dice as DMs. Simple but not my favourite model. Game is too long ago to go into details but it gave a reasonable participation/fun game but lacked the detail I'd want for a regular set (not its aim) but also gave no real sense of being in space. 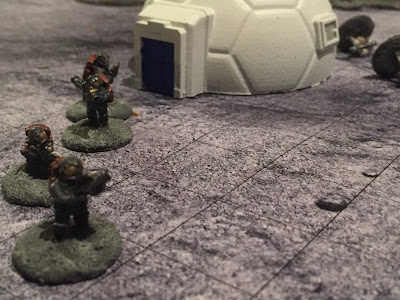 Next up was Star Grunts - a classic of the SF genre. In contrast to Dark Side these were way more complex (or at least look it) than I'd like, and I think the rules layout doesn't help. Activation was alternate unit and there's an involved system of unit confidence and leadership which provides friction. Movement was determined at the walk, but random at the run which is nice. Combat though was dice roll after dice roll, I think I counted 12+ as there is an opposed roll to hit, DIVIDING one score by a range factor, then another opposed roll for damage. Just way too much for me - particularly throwing a divide into the middle of it! Again nothing really to suggest that this is in space, but I guess Stargrunt assumes that everyone is in powered battle armour and so slips, trips and rips aren't an issue. 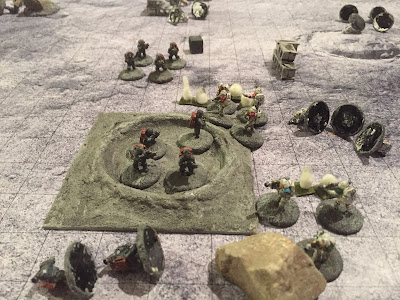 Nice to get these sets on the table, but not ones I'll revisit.

Posted by David Burden at 08:24 No comments: 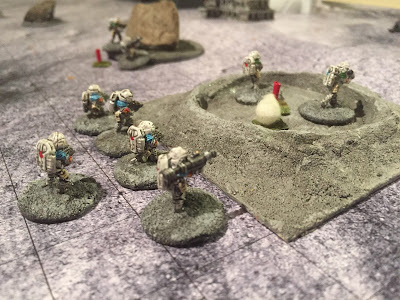 First game to christen the new war room was a spot of 15mm Moongrunt. I bought the models from GZG at Salute 2019 and painted them soon after, but taken ages to get them to the table. A nice 3' x 3' gridded cloth from Deepcut Studio, craters made from upturned lids and rocks from the drive! 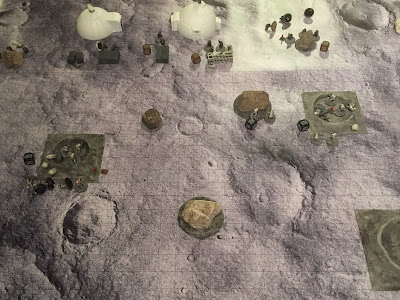 I decided to modify Bolt Action as its become my go-to Platoon sized rules. I doubled ranges (treating the weapons as modern chemical ones, no fancy lasers), and also increased lethality - as any suit damage is going to be an issue. I thought about increasing movement - but watching the Apollo videos whilst the bunny hop was fast it as a) hard to stop and b) made you a cracking target. So its reasonable to expect that "patrol" speed would be little different, and a hop is just a run. 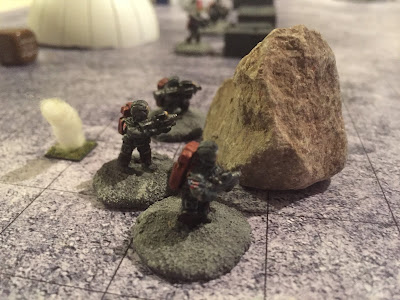 To give it a bit more of a "space" feel I decided though to add a "fumble" roll to anything that might risk suit damage - as that seems to be the big difference - particularly as we're not talking battle armour here. So any Run or Down action needs an extra Orders test - fail it and you take 1 Pin, double 6 and you lose a soldier (assumed out of game whilst doing suit repair). 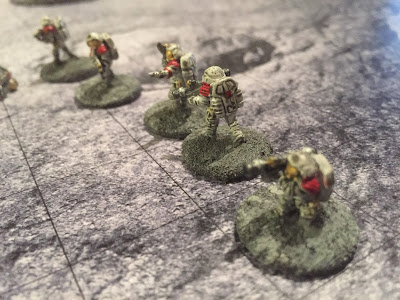 I did a straight attack/defence game. Even forces so defenders won easily, but the mechanics all seemed to work. Might as ever do a few tweaks, but I think the fumble gave it just enough extra to remind you that this wasn't just WW2 in a grey desert. Tempted the write the whole thing up for MW&BG. 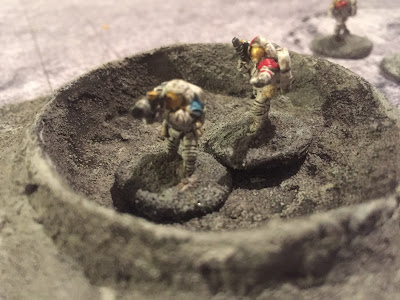 Seeing as I have the table set up I'll run few a few other SF rules to see how they fare.

Posted by David Burden at 20:42 No comments: 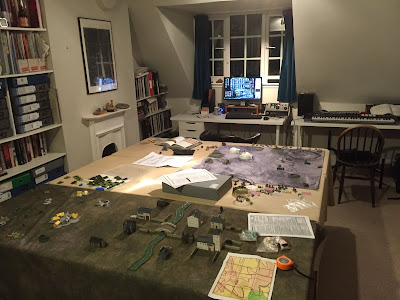 The reason for the paucity of posts here for the last few months hasn't been so much COVID as that I've been involved in a stint of 1:1 painting. My daughter finally officially moved out at the end of June and so the big attic room that has been her bedroom for over a decade has now become my wargames room and office. Teenage murals, dark walls, cracks and quotations needed painting over, and then a big move of wargames stuff from the dining room and a swop of books with the old study, and then a move of the office from the spare bedroom and finally I'm all settled in.

I bought four 6ft trestle tables (foldable type), the aim being to have 3 up for wargaming - letting me do one 4'x6' game and then have space for an SPI type game or some game prototyping - or use all together for one 8'x6' weekend game (small gap between tables covered by the 60cm terrain boards). For really big games I can add the fourth table which will usually be the workshop table (which will be the last bit of wargaming stuff to leave the rest of the house!) giving me 10'x6', or even 12'x6' at a push. Just need COViD to abate (particularly in Brum) so I can have people round. 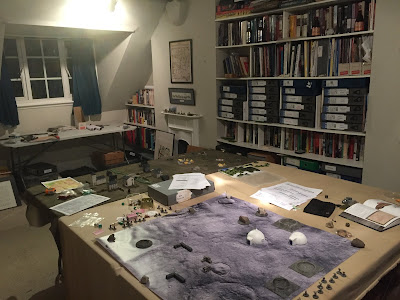 I've even found space to sneak in a space for my keyboards and a nascent home music studio set-up!