Global recession - where did all the money go? - Great graphic

Just love this graphic from today's Guardian comparing the $0.8Tn gold reserves with $3.9Tn cash with $39Tn in banks (ie inc Debt) and $62Tn in shadow banking and $290Tn in asset values.

Posted by David Burden at 10:22 No comments:

Posted by David Burden at 08:33 No comments:

Email ThisBlogThis!Share to TwitterShare to FacebookShare to Pinterest
Labels: infotech

And this is where the infantry are going - FIST - Future Infantry Soldier Technology, with a whole mix of networked technologies so soliders can have a HUD showing where their team-mates are (and their health/ammo state) and where the enemy is, and the view through their gun site - useful for shooting round corners. The radio data system even sounds like the sort of self-routing AX.25 system I used to demo at the School of Signals in the 80s.

And here's the link to the similar US Future Force Warrior programme on Wikipedia, and a good vendor site on the project. And integrating AI into the system.

Posted by David Burden at 21:48 No comments:

The future of combat aircraft?

"BAE Systems said Monday Sept. 24 2007 that work has started on the physical build of the Taranis airframe - a 124 million pound ($US 251 million dollars / Euros 177 million) ) unmanned combat aerial vehicle demonstrator aimed at helping Britain's MOD (Ministry of Defence) determine the future balance of assets within the Armed Forces. Taranis will help inform the MOD's approach to the future capabilities needed for deep target attack and intelligence, surveillance, target acquisition and reconnaissance (ISTAR). Ground testing of Taranis is scheduled to begin in early 2009, with the first flight trials due to take place in 2010". - Daylife

Posted by David Burden at 22:17 No comments:

I must try and get back into the habit of a Friday afternoon blog post. So here's something I've been putting together for a while on my Palm - it is unashamably direct and does not particularly hedge its bets - where's the fun in doing that?.

I still reckon that Greg Egan (in Diaspora) has probably got the most accurate view of how humanity may 'evolve' over the next few centuries. Inspired by him here's my take on where we could be by 2100.

Naturals are those who have refused any sort of body mod or digital existence. In 2100 there will be a frighteningly large number of people living (even in poverty) for whom this may be the only option. Increasingly though this is a moral choice. However general health advances mean that life expectancy is 100+, with good quality of life to 90+ for those in the developed world.

The Augmented are those who have taken advantage of the transformative technologies of genetic and nano engineering and digital/cyber mods, but who see their 'self' as purely their organic mind. If they use 'scapes and virtual worlds through avatars it is for specific, non-persistent, purposes. Augmentation itself may range fm slight (e.g. just regular use of an avatar or life-logging systems) to extreme (bio-electronic cyber-systems).

Multiples are those of organic descent who have created digital copies of themselves which exist persistently (and probably in multiple instances) in 'scapes across the globe, planets and (by 2200) the stars. I still think that 'uploading' a mind from the brain could be in the near-impossible category. lnstead the first 'copies' will come from explicit teaching/programming, quickly followed by automated learning from email & social media, and ultimately by eavesdropping on everything we do from birth - our lifelog becomes us.

The real challenge for multiples is the re-integration of learnt experiences. Copies can easily just copy data, but what about the organic prime? Again I think that uploading memories is probably a no-no, but in-silico memory accessed through some sort of personal agent or augmented reality (or even brain-jack) would seem achievable.

Freed of a corporeal existence the copies can explore the stars in starship borne 'scapes, and even be beamed from star to star at the speed of light (and bear in mind that since the Multiples sense of time is dependent only on processor clock speed the journey to Alpha Centauri could pass in seconds or millennia - again see Egan, this time in Permutation City).

But perhaps the most telling feature of Multiples is that they can be immortal - so whilst your organic atom based self may die your digital Multiples can live forever - perhaps we might even call them ghosts.

Digitals (who also normally exist as Multiples) are personality constructs that are not derived from an organic, living source. At their most basic, and in current tech terms, these could be virtual receptionists or game NPCs, but very shortly we'll be able to create autonomous, self-motivated avatars - the fore-runners of true digitals. We might also create Digitals from historic personalities, and we could even use software DNA to allow Digitals to breed and evolve (for what a baby Digital might experience read the opening of Egan's Diaspora). The key point is that within the virtual space Digitals are not differentiable from Multiples or the avatars of the Augmented.

But Multiples and Digitals need not be confined to virtual spaces. Once we have a digital self controlling an avatar body there is no reason why we can't have the same self controlling a robot body. Indeed in building our own AI engine we created a Sensor and Action mark-up language to isolate the AI 'brain' from the embodiment technology. So the same AI that controls a Second Life avatar could also control, and live through, an AIBO or ASIMO. Fast forward 50-100 years and our 'human-level' Multiples and Digitals can walk the atom-based physical worlds in human (or non-human) bodies (what Egan calls Gleisner robots). And whislt embodied Digitals may sound weird just think what it would be like, as the human root of a Multiple, to shake your own hand.

When I first wrote this I entitled it Humaniti 2200 - but I've now put it to 2100. For either date though it's a matter of degree - particularly for the 'organic' element. There is also though the potential of a 'singularity' effect; once we have one fully fledged Digital we could rapidly clone or evolve it (or it could clone or evolve itself) so that the Digital population could go from single figures to thousands to millions in years or decades.

So how might percentages or numbers go? This is probably not even a guess, but its always useful to have some strawman figures.

And if you doubt the 2015 figures I fully expect Daden to be running at least 1 Multiple (probably me!), 1 Digital (an enhanced Halo) and even a Gleisner (Halo in some 2015 equivalent of a Femsapien).

But the real message is that we can already create Multiples and Digitals, and even Gleisners - they just aren't very good yet! But it means there has been a shift. This is no longer a question of when or if or can, but just one of how good, and how fast will we improve.

Posted by David Burden at 16:49 No comments:

Interesting DoD RFP for a chatbot for absent serviceman's families. Too late for us to respond directly (and the project overall is probably a bit too big for us and US based). but would sure be something interesting to contibute to and I'm sure our AAML/ASML, extended AIML and SL technology would play in nicely.

Question remains though - do you have to pass the Turing Test as part of the project?

Posted by David Burden at 08:38 No comments:

Posted by David Burden at 15:12 No comments:

Must take part in this. One image per grid square in the UK. Some nice empty spaces in mid-wales!

Posted by David Burden at 15:01 No comments:

Tilt-Shift Barcelona from joja on Vimeo.

Posted by David Burden at 14:56 No comments:

Posted by David Burden at 08:08 No comments:

NOAA's Second Earth and US EPA transport builds in SL

Every so often you follow a link to a great location in SL, and then stumble on something else (almost) as amazing.

Followed the link from New World Notes to NOAA's stunning Second Earth. I've seen a sculptie earth before, but this one is huge and has live data (and satellites) on it. Stunning build and makes me want to renew our efforts to find a (UK) sponsor for a 1 - 6 sim scale UK model. Next time I visit I must put my spacesuit on too!

Looking at the local map I saw some ship and aircraft shapes on an island to the East (this is all around Scilands - where else!). What I found was a whole sim of very high quality, full size transport from NOAA exploration ships (an a wonderful rusting hulk), to trains and Concorde and even an Imperial shuttle. The island is owned by the EPA, so would love to know what they have in mind! Note the parcels are private, but you can hover over and cam in to see the detail.

Stunning places, and the potential applications enormous. I'd challenge anyone to go visit them and then not see just how important virtual worlds are going to become!

Posted by David Burden at 11:46 No comments:

Posted by David Burden at 11:08 No comments:

Just posted a new video of our Halo robotar in SL

I've just posted a new video to the Daden YouTube channel showing our Halo automated avatar being put through her paces. This is a recording of the demo we gave at the BCS AI Special Interest Group conference in December, and includes a demo of the emotion work we have been doing with the University of Wolverhampton.

Posted by David Burden at 18:35 No comments: 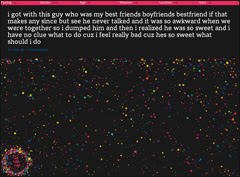 www.wefeelfine.org - looks a fun site mining emotion on the Internet.

Posted by David Burden at 08:13 No comments: