OK not much of a rant the latest trailer for Cossacks3 really highlighted to me why I can't get on with any of these type of computer wargames (or at least have not yet found one I can get on with):

1) The gun line is along the top of the scarp and the enemy is directly below them. The shot would either fly straight over their heads or roll out the barrel even if they could depress the gun that much! 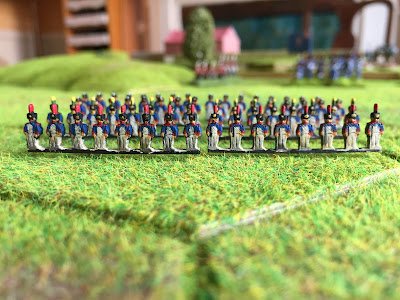 Back at WMMS earlier in the year I picked up a couple of packs of Commission Figurines new 6mm MDF (!) figures having read about them in MW&BG. I wasn't really contemplating them as a replacement for Baccus, but rather for acting as improved sabot bases to show when my column blocks are in line.

I've just finished painting the infantry and I must say they look great - and certainly at wargames distance you may well be hard put to tell the difference between MDF and metal. 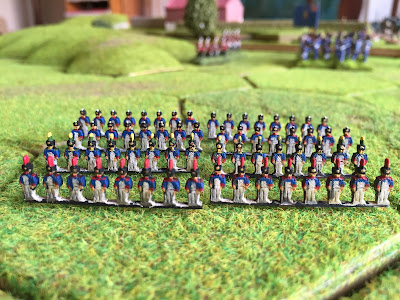 They are certainly going to be ideal for the line sabots - 8 figures per sabot gives me 12 sabots per pack - images to come. It probably takes me 3 days to paint a pack of 96, whereas its more like 6-8 days for the same number of Baccus. Cost wise the MDF figures are £2 for 96, as against £6.60 for the same number of metal. But the metal certainly have more heft and look better close up. I'm currently painting the cavalry (Cuirassier and Dragoons), but I don't think they will look as good as the horses are definitely on the thin, on the way back from Moscow, side. 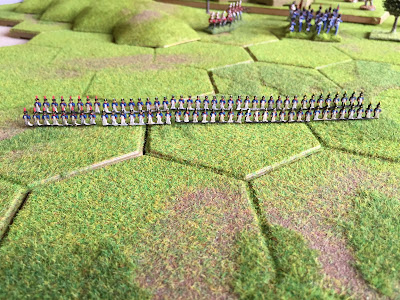 One thing it did get me thinking of though was doing a whole Infantry Battalion (and possibly cavalry Regiment) at 1:1. It would only be 5 packs and would look quite stunning and be the ideal way to visualise the different formations. A project for the future perhaps.

With the arrival of Fiorella Wurmser went into full-on withdrawal mode. 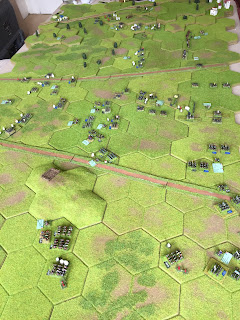 In the N Kisfalud faced little French opposition and so was able to pull back to and through Solferino relatively easily, covered by his light cavalry. 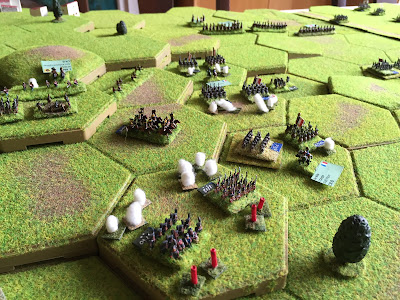 In the Centre the Austrian heavy cavaly under Spiegel and Mittrowsky moved forward to cover the retreat of their fellow infantry and the artillery reserve, keeping the advancing units of La Valette and Guillaume at bay. 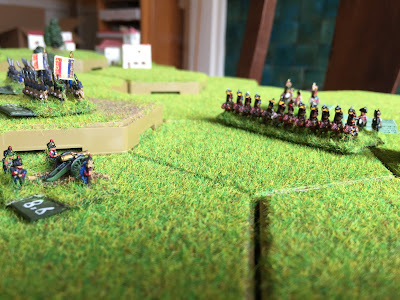 The big  question though was whether he could save Nicoletti's Brigade which was about to face the full might of Augereau's II Corps, and with Fiorella threatening to cut off its line of retreat. von Dannenfeld who had been heading S to hold off Fiorella was ordered to fall in to line with Nicoletti's refused L flank. Over the next 2-3 turns the luck was really with the Austrians as they always moved before the French and so were able to keep more or less a charge move away as they withdrew back to the road and E board edge.

Verdier's two Grenadier Bdes did manage to get in a charge, but not enough to cause much damage - as did a couple of battalions from Robert.


So Wurmser managed to keep both Fiorella and Dannenfeld in good order in the face of Augereau and Fiorella and get them off the board fundamentally intact.

Further to the S Marmont's cavalry finally dispatched Placzek's Austrian Cavalry, but was too late to head N to stop the Austrians.

Rolls for Despinoy and Wiedenfield to arrive were made on the last turn (11), but their units were still too far off.

So in the end the Austrians managed to extricate themselves without too much damage. The French found it tough going in the first hour or so, which meant that they weren't able to get to the Austrian 2nd line which was fresh and available to cover the retreat - all in all not at all too far from the real battle, although possibly done in an hour or so's less time - although I didn't cover the fight through Solferino and the withdrawal over the Mincia.

From a rules perspective a couple of things:


All in all though a really fun game and a nice scenario.

Posted by David Burden at 14:06 No comments:

Battle of Castiglione 1796 - The Tide Turns 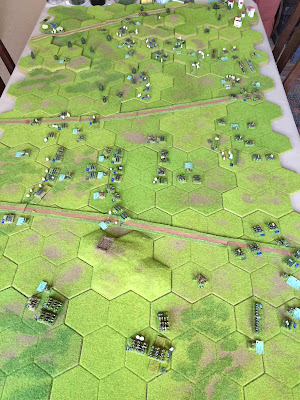 Fiorella's Division turned up the very next turn, and along with good progress along all but the furthest N of the front the French very much have the upper hand now. Here's the report on Turns 6 and 7 (taking us to 9.40 am).


Left Flank: Having held back for a few turns Kisfalud could see that if he didn't push forward he was going to get smashed by the French, so he went over onto the offensive and took some nasty bites out of Pijon's Bde. Just S of Pijon La Vallette makes good progress pushing forward against Mittrowsky, almost breaking the Austrian Brigade.

Centre: Guillame, Beyrand and Robert all make good progress, and the concerted work of La Vallete and Guillame against Bajahaza has meant that Nicoletti (who relieved Gummer) is completely isolated.


Right Flank: Marmont's cavalry decided to push forward against the Austrian cavalry of Placzek by the Monte in order to distract them from the arrival of Fiorella. One Austrain unit fell back instantly, the second was engaged in melee by two French Dragoon units.

Fiorella marched his first 2 brigades onto the board, and Wurmser dispatched Dannenfeld's  Division from the 2nd line to head them off.


So at the end of Turn 7 it's decision time for Wurmser. Under the scenario rules he can only get a decisive victory if he stops a French exit - but no chance of doing that with 23 turns to play to nightfall. He also loses 3 points for every Brigade he loses and only gains 2 for every French brigade destroyed - so he's unlikely to build up points that way. Conversely the French can only get a decisive victory if they make Austrian morale fail (i.e. > 50% Brigades spent). So Wurmser could (as in real life) limit the French to a marginal victory by fading away in front of them and making sure he doesn't loose too much in the process - in fact he could even win on points! It will make for a short game, but it will very much be a game in context rather than a stand-aloen slugfest, and so a lot closer to what I'm after (and I've got No Man's Sky downloading tonight!)

Battle of Castiglione 1796 - The Opening Moves 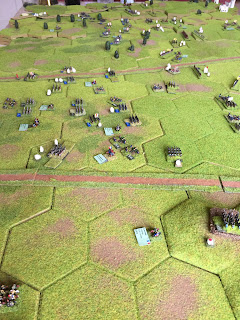 Finally got the battle underway. The scenario opens as Napoleon completes his withdrawal and Wurmser is coming on against him. At first I thought I'd messed up as all the Austrian battalions are rated +2 for size and that was making them very hard for the French to damage - particularly since 2 of 3 battalions in every demi-brigade were inferior volunteers. Soon the French got wise and started sending two of their Battalions against every Austrian one and that stabilised things. Costly though.

The situation at the end of Turn 5 (no sign of Fiorella yet) is (from French viewpoint):

So actually the game has balanced out, and to me the look and feel of it is pretty perfect in terms of troop density and melee results, although I may widen the unit size brackets to reduce the number of +2 bonuses.


The key issue now is when does Fiorella arrive. As soon as they do the Austrians will (as in reality) have to move into a withdrawal mode their reserves will be needed to hold their S flank, and the fresh French second line units should be able to punch through the main Austrian line. 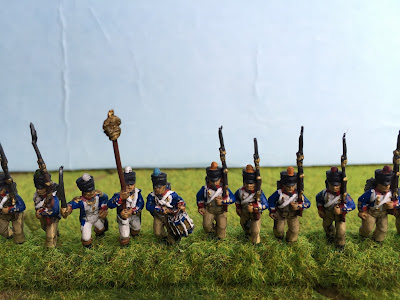 Whilst all of my 20mm Napoleonics to date have been plastic there is definitely something nice about the heft, detail and uniformity of metal figures so I thought I'd buy some and see how well they fit in with the plastics. Seeing as I'm not (currently) buying masses cost isn't really an issue - and actually they work out cheaper per days painting than 6mm!

I had a good look around at Salute and settled on the Newline Designs figures and bought a pack of French Line Infantry and have finally got round to painting them up.

I must admit I'm very happy with the results. I just painted to my normal (poor) standard, possibly went a bit heavy with the ink wash, but otherwise they look fine.

The figures are really nicely proportioned but are for 20mm plastic on the short side. So I based them on a double thickness of 1/16" play (rather than my standard single thickness), and the net result gives something that fits in really well.

The image below  shows the Newline figures compared to a variety of my plastics (including some 40yr old Airfix!). 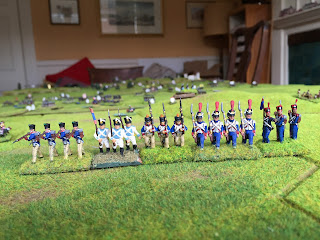 The Newline are in the middle. And that's Castigilone going on in the background.

Very happy, and will probably give some cavalry a go later in the year. 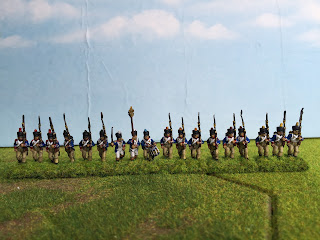 Battle of Castiglione 1796 - The Planning

Having enjoyed doing the 100 Days Bicentenary refights last year, and having missed many of the earlier Liphook Bicentenary refights I've decided to try and 2-3 "decadal" Napoleonic battles each year - it will also give me some focus for my figure painting and book buying. For 2016 that means battles from 1796 and 1806. Whilst Jena/Auerstedt is obvious for 1806 (particularly since I visited the battlefield in 2006 for the bicentenary re-enactment) the 1796 choices are less obvious. I must admit I don't know a lot about the Revolutionary Wars and Napoleon's campaigns in Italy so I needed to do some reading up. The "name" battles like Lodi and Arcole seemed to be all about bridge storming - which never plays well in wargames. But Castiglione looked like the best choice as not only were there no bridges involved but it's also cited as one of the key battles in Napoleon's tactical development; featuring a feint withdrawal, flank/enveloping attacks and a "Manoeuvre De Derrière"


it, since it's such a set piece, but is light on detailed numbers and some of the account doesn't match well with his maps. I bought the hefty Road to Rivoli by Martin Boycott-Brown, but that adds little, and contradicts more. There are some OOB on the web, but most miss out any mention of guns - and this was also in the day of battalion guns. Timings are also all askew. I found the Grand Manoeuvre scenario, but the provenance of some of the assumptions was unclear (only 4 bn in  Massena's Corps which others put at 10,000 strong?), and the holy grail appears to be Bernhard Voykowitsch's book
- but not about to fork out £50 on the chance of a copy.
So I've had to make all sorts of educated guess work in putting the scenario together, but once I started building the terrain out of Hexon and laying the forces out it all started to look like it would really be worth the effort. An infantry heavy battle, a mix of flat plain and hilly ridge line, French forces out-numbered at the start but with the promise of reinforcements on flanks and the Austrian rear to come.


I'm just putting the finishing touches to the deployment and scenario (timings? victory conditions?) but battle will hopefully commence before the week is out.

By request here's a link to my scenario and OOB - take it as you find it! http://www.converj.com/docs/wargaming/scenarios/Castiglione%20Scenario%201796.pdf
Posted by David Burden at 13:48 2 comments: