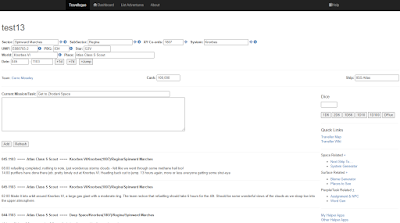 This is an itch I've been meaning to scratch for years and have finally got around to doing something about. I've always liked the idea of (near) real-time-Traveller, playing Traveller so that one real day or hour represents one game day or hour. So Traveller almost becomes like an ARG, something that just exists alongside your own daily life. Now I'm not too fussed about the "real-time" bit, it's more the idea that if I have an idle moment I can quickly move an adventure (that is probably a part of a longer campaign) forward. How else could I hope to reproduce the DGP trip from the Spinward Marches to Core and Terra?

Over the years I've tried to do this in various ways - in a paper notebook, in Word, on blogging software or in a mobile phone notepad app, but none have done what I wanted - which was to be instantly available anytime, anywhere, quick and easy to use, and give me rapid situational awareness - where I was, what I was trying to do, and where I was trying to go.

So finally I've written a web app for it. I've also taken the opportunity to learn some Node.JS and Redis Key-Value store tech and I think it's a stack I can really work with.

The main screen on the app (see above and below) has four main sections:

I've been using it for a week or so, trying to cross the Spinward Marches from Regina to the Zhodani Consulate at Chronor, and apart form a few bugs it all working out really well and actually giving me some sense of journeying through Traveller space.
Although I'm writing it primarily as solo tool there is no reason why a GM shouldn't use it to help run and record an adventure, and no real reason why you shouldn't use it in non-Traveller space settings, or even beyond SF (just pretend Sector/Subsector means something else and ignore UWP!) I'm thinking about doing a Twilight 2000 Adventure next (and of course you can have multiple adventures running at the same time). A key thing, which I don't intend to change, is that there are no mandated mechanics in the system, ultimately it's just you writing things and updating fields.
So it's a work in progress, and probably a few months from Alpha yet, but hopefully I can get it opened up to Alpha and then Beta users as the year progresses.
Whereas my much delayed Port2Jump app took a very simulation based approach and got very bogged down as a result, this is very much a narrative tool, and has been a lot easier to pull together as a result - all the really clever stuff is in your head.
Any thoughts as to the sense of the idea and interest in the app welcome, as well as wish lists of features!
Here are a couple more screenshots to whet your appetite.

Posted by David Burden at 23:22 No comments: