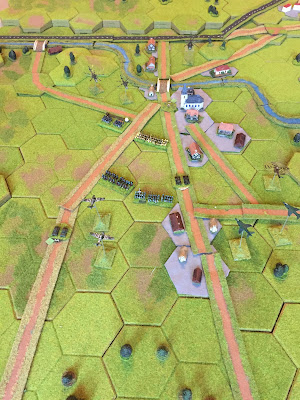 As part of my testing of the latest iteration of my mechanised warfare rules (now called "Contact: Wait Out!") I've decided to model the area around my home village, Brockham in Surrey. As a kid I remember starting on a similar model for my 1/300th tanks based around 1 ceiling tile = 1 sq km. The model is one 10cm hex = 250m, so I suppose 1mm:2.5m or 1:2500. 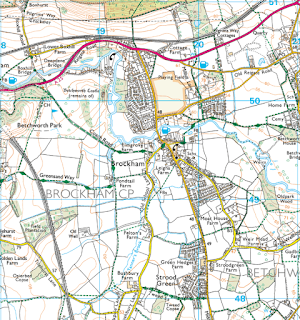 The reason for doing this is that fighting over an area I know intimately gives me a far better sense of how things like distance, visibility, occupancy and cover are converting to the rules and the table top.

I'm first going to play through a "late Sealion" scenario with Germans attacking from the south and trying to secure at least one bridge over the River Mole, but everyone has 1944 era kit. Defence force will be a about battalion group strength, attackers twice that.

Then I'll do a Cold War Gone Bad scenario with the Russians invading!

Just for fun I put out a mix of 1/300th, ECW, Napoleonic, WW2 and Modern to see how they look. As you might guess one of the things I really want to get is for the rules to let me do heli-borne assaults (a legacy of my time in 24 Airmobile Bde no doubt!) 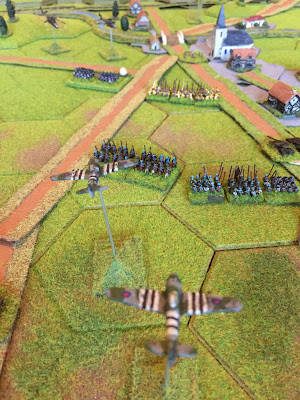 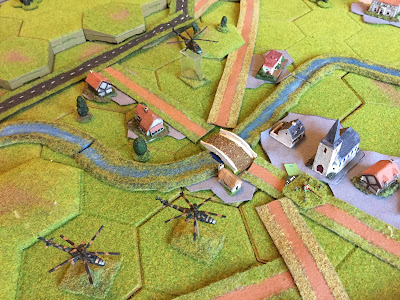 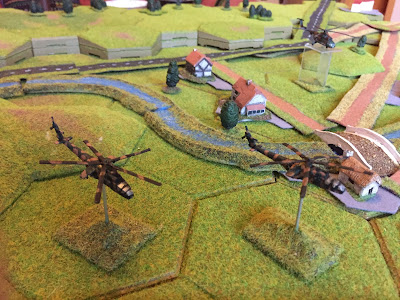 
Sunday as Liphook Historical Wargame Society's wargame of Jena. Having done all the Bicentenary Battles up to Waterloo we're now cycling back through 210th Anniversaries (Jena was 14 Oct 1806).

Three huge tables were set up, although only 2 saw use. Figures were 25mm with a 1:50 figure ratio and a 1mm=1m ground scale, and used the clubs Art of Command Rules (very old skool).


I started the game as von Prittwitz, which meant in reality being von Cerrini commanding the 1st Saxon Bde. My orders were to hold the French between Lutzeroda and Closewitz, the former being in bounds, but to give way once heavily pressed so as to save my good quality Grenadiers and let the French fall onto our main Prussian defensive line behind.


The Saxons did quite nicely, the two battalions in Lutzeroda slowing the French nicely. But the real stars (and unofficial "unit of the match") were the Lecoq Grenadiers who ended up fighting about 10 rounds of melee and seeing off half a dozen or so French battalions. The star turn though was when there was a mutual pull-back after a drawn combat, so the French decided to fire on them to force a moral check which they would certainly lose. But I then played an "Ignore Morale Check" card, so they got to fight yet another melee.


By then it was time to leave things to the Second Line, so my Brigade pulled back to fill the line just E of Isserstedt and I handed over command.

My next appointment was at von Ruchel, bringing on his Corps from Weimar. We were tasked with reinforcing the Prussian right flank, just W of Isserstedt. The Imperial Guard were pushing our 2nd line hard E of Isserstedt but we were just holding firm. As the game ended by Corps had actually positioned itself in enfilade against the French left flank so I was already to roll their flank up and give them something else to worry about!


Overall a good game, the rules meant that as ever it was not particularly fluid, but at least it had a bit more movement than some of the games have managed. 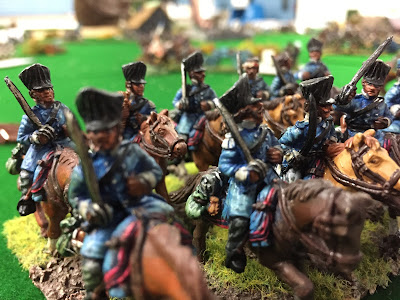 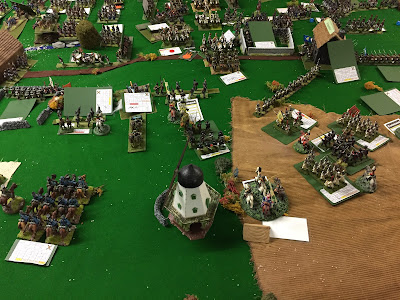 Posted by David Burden at 13:47 No comments: