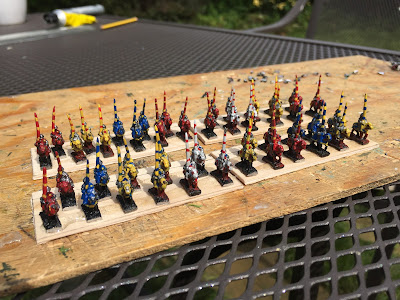 My first painted unit since January, given work and hols. Four units of 6mm knights, ostensibly French, for 100YW. Ostensibly since the heraldry is based on places/things I know: Espereza, Rennes-le-Chateau and Montsegur in France, and then various peak District landowners!

Flocking of bases to follow - and photo actually taken outdoors!

The current batch of about a dozen painting "sessions" (about 4 days each, total 30 units) should bring me to the end of my WOTR/100YW 6mm figures - a period/scale actually finished! Figures are Baccus and been using the Kallistra Hordes & Heroes rules.

Posted by David Burden at 13:14 No comments: 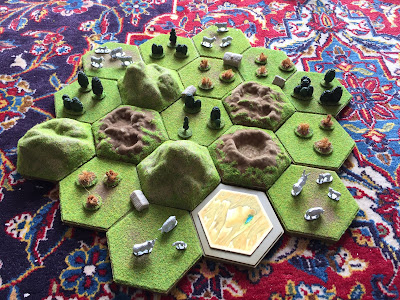 Apologies for the carpet, but as mentioned in the Salute post I've finally started to pull the bits together for my Hexon Settlers of Catan board. Not as much bigger than the regular board as I'd expected (standard Settlers desert card on the blank hex), but should still be fun to make and play with!

Posted by David Burden at 23:19 No comments: 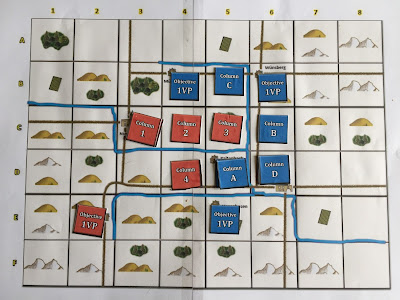 The day after Salute Nick and Alan finished off the Scharnhorst campaign and played the resulting Blucher game. I was umpiring and neither of them had played either system before.

We set the campaign up on a powerpoint slide on Google Docs (Vassal on the cheap!) so that we could get some moves done remotely during the week, but we finished it off on paper on Sunday morning. As expected the battle was pretty much in the middle of the map by the big town. Both sides had 3 columns on and 1 column as reinforcements. 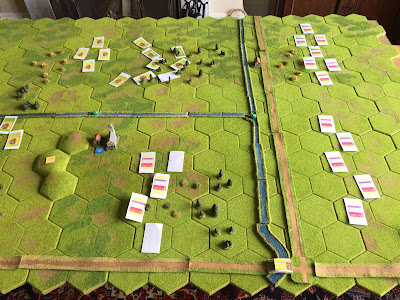 The table was quickly laid out using Hexon and the blinds deployed. We were using the Along the Danube orbats - but neither side knew any detail about the other.

The big surprise was when the lead French units (bottom centre of the photo) turned out to be Nick's Reserve Cavalry Corps! Alan (Austrian) surprisingly sent his cavalry off  down the opposite flank, so the battle quickly settled into one of two halves, Nick pushing left in the south, and Alan pushing right in the North. There was some stout Austrian defence on the southern ridge, and their garrison in the village at its foot never got attacked. By about turn 16 we got to the point where both sides had lost 4 of their 6 units needed to reach break point, but the Austrians were looking the more precarious. Neither sides reinforcements had arrived, but around turn 16 the third French Corps arrived on the North edge - right on the Austrian flank and it was pretty much game over.

Overall everyone enjoyed the game. By the end Nick and Alan hardly needed the rules or my help - it is a very simple system. There are certainly still oddities, but not as many as I had in my initial game. The Scharnhorst system is great, and they both liked the blinds and  M0 approach, and I think we'll be playing it again. My sabot bases to turn my 6mm battalions into brigades worked superbly - especially the double wide strip at the back for the damage and capabilities chit.

And some photo's from Nick:

That said I was disappointed at how few "big" wargames there were - lots of small skirmishes, but nothing with the big sweep of the Ligny, Waterloo and Quatre Bras games of a few years ago, or even last years Golan Heights (?) or ECW Bristol game. As Nick said most of the bigger games did seem to be more like static dioramas than active wargames which was a pity. Ironically it seemed to be the ones being played were also the ones where people were most likely to tell you what was going on.

As a result of the lack of big games I've only got a few photos.

In terms of booty I also bought less than I expected. I picked up pre-orders from Kallistra (mostly slopes and the bits for my Hexon Catan game) and Heroics & Ros (BTR60 Battalion), placed an order with Newline Designs (taking advantage of their 4 for 3 offer), but otherwise it was odds and ends like some 28mm sheep (for Hexon Catan), MDF hexes I various sizes to try out for my 3mm figure bases, and  hardback 3rd Edition copy of Tony Bath's classic "Setting Up A Wargames Campaign".

Overall made me question whether I'd make the trip next year, particularly if I can get to WMMS, and possibly Hammerhead.

Nick and Alan look away now! 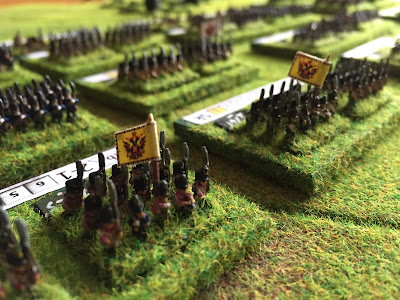 I've mounted my usual 6mm battalions into 2 battalion sabots to represent Brigades - its effectively what I've been doing with "big" SLS, and the sabots will make it a lot easier to move units. The sabots also have a double width back to take unit labels and probably small die holders to represent SLS disorder - still debating the best way to do SLS damage - I just love the multiple puffs but make no sense behind a unit. Here I've just done some custom labels for Blucher. The bases were custom made for me by Products for Wargamers - thanks Jim!

We're using the Along the Danube scenario orbats - but the forces on table and the terrain will be whatever comes out of the mini-campaign. 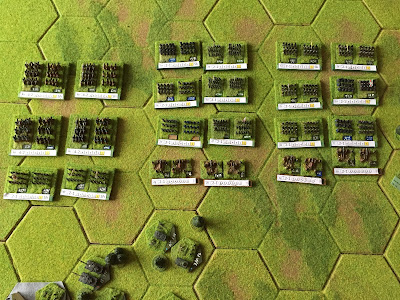 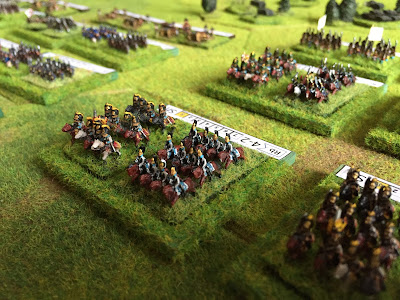 And here's the French: 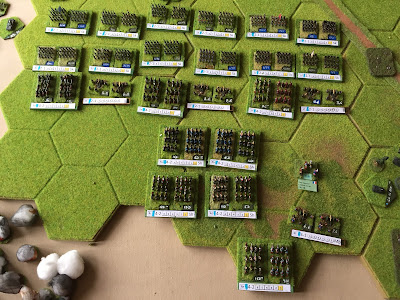 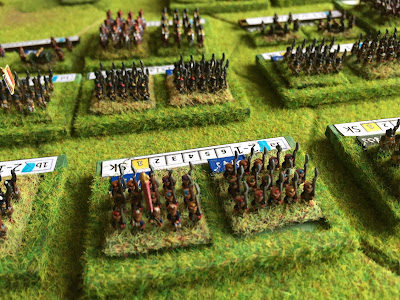 Posted by David Burden at 19:41 No comments:

Whilst work is still busy I've been filling in the odd bit of time with buying and painting some vehicles to fill the small gaps in my British Mechanised Brigade and Soviet Motor Rifle Regiment. I still need a couple of BTR60 battalions for the Soviets and a Warrior Bn as an alternative to the FV432s for the Brits before I move on to 24th Airmobile Bde and some Soviet Airborne and then some other nations (tempted by the Baltic States as being topical at the moment!). All models Heroics and Ross.

Posted by David Burden at 13:32 No comments: