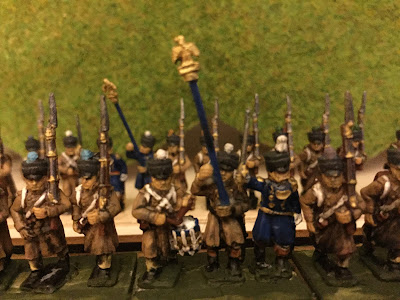 My switch from plastic to metal 20mm continues with two battalions of French line in greatcoats - just awaiting basing. Figures are Newline Designs. been really happy with their sculpts so far, and although the infantry are a tad smaller than 20mm most modern plastics I don't think you'll notice on the table top - and in fact Google tells me that the French are about 1cm shorter on average than Brits anyway!

To hit our Waterloo @ 60 target I need to do about 8 French units a year for the next 5 years, so that should be fine.

Posted by David Burden at 13:44 No comments:


The last couple of turns of the game went even worse for the Royalist than expected. A Pike heavy Parliamentary regiment (Yellow)  fell on the flank of a recovering and battered Royalist regiment, sending it swiftly home. The Yellow's then followed up into the rear of another Royalist regiment, despatching that too. On the rise the Royalists finally won their melee, but were then stranded deep in Parliamentarian territory and so were swiftly routed - causing morale damage to the cavalry on their way pas. In the last turn the Royalist focus was purely on trying to get out of range of Parliamentary attacks so as not to lose any more units. As it way they has 3 out of their 5 brigades spent (>50% lost or at retreat), and so Army Morale had collapsed and it was game over on the last turn as night fell.


Overall pretty pleased with how SLS-ECW is working. Possibly a bit bloody, and the DMs a bit extreme, may change +2/4/6 to +1/2/3 - which reduces the differences between units but makes a bit more playable and limits the number of times that a unit might be wiped out in one encounter. No chance to test the new multiple unit melee rules. The "bag of markers" approach worked well - so although quality was randomly assigned each side had the same potential mix, and no need to roll. The small coloured q-tip tufts also worked fine in the dice holders to show quality and first-shot, and a lot easier to handle than 5mm dice!

So good game, and now time to work up the campaign I think before I do any more historical battles.

Posted by David Burden at 13:37 No comments: 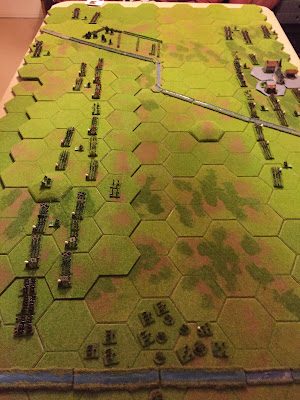 As well as doing the Napoleonic Decadal battles I'm also trying to do a year-a-year through the English Civil War. I'd hoped to get Edgehill in before Christmas, but in the end had to pack it away halfway through to make room for the turkey! Rules were my ECW version of SLS, with 100m hexes, and 1 element= 1 regiment, 1 turn = 20 mins.

The above image is looking NNE across the battlefield, Parliament on the left, Royalists on the right, with Edgehill itself just off the board on the right (not got that much Hexon!).

The cavalry then moved up on both flanks in the traditional manner. The Royalists got the upper hand in both encounters, but true to form chased the Parliamentary cavalry off the field and it was unlikely they'd get back before nightfall (I operate a double random system for returns to keep you guessing to the last moment).

Then the main Royalist line started to move forward. Given the late start (2.30pm) there were only 8 turns of battle planned, so they knew they needed to get a move on. The Radway ditch on their left caused more of a problem than I think it did historically, the 70% to cross may have been too low. The urgency also meant that the Royalist line came forward piecemeal.

The first wave of Royalist attacks made contact and did OK, but the lead units were not well supported, whereas Essex could bring his whole line off the rise to batter recovering Royalist units after the first melee. To the left of the Radway Brook one Parliamentary regiment retreated a Royalist unit back across the Brook, and being of poor quality gave chase itself. On the Radway Brook the lead Royalist regiment made it across, disordered, but was of excellent quality (quality is assigned randomly when first needed) managed to beat off an attack from inferior Roundhead unit. It was joined by a second regiment, but both were still disordered when hit by further Roundhead units. With the second Royalist regiment routed it took two other Royalists regiments with it in morale-dominos, but the Royalist reserve cavalry saved some face by wiping out the Roundhead units which had strayed across.

By the end of Turn 6 things were looking pretty grim for the Royalists. Their main attack had foundered and two of their 5 brigades were either eliminated or under withdrawal orders. The time has probably come for a general Parliamentary advance to push them from the field.

Posted by David Burden at 14:02 No comments: 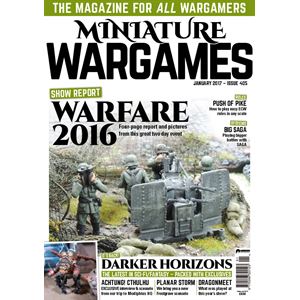 The second part of my Grid-based Wargaming article is in this month's issue of Miniature Wargames.

Whereas Part 1 looked at general principles, Part 2 takes a number of popular rule sets (Sword & Spear, Pike & Shot, Blucher, Chain of Command and Skirmish Sangin) and looks at how well they convert to grid-based play.

Posted by David Burden at 13:18 No comments:


On New Year's morning there was cloud almost down to the hut, but as it cleared we could see a sprinkling of snow on the tops. A mass walk to Llyn Idwal then split into 3 groups and I went with the supposed "just going up Devils Kitchen and back". That soon morphed into going up the "Sheep Walk" - a nice narrow path across the rock face to the right of the kitchen. As we go to the top of that and the snow is was then "well it's not far to the summit of Y Garn!"

The cloud thinned as we walked and there were great views out over the whole of Snowdonia with the snow fading in nicely around 2500'.

All in all a great couple of days on the hill to kick-start 2017!

Posted by David Burden at 14:15 No comments: