First 20mm War of the Roses 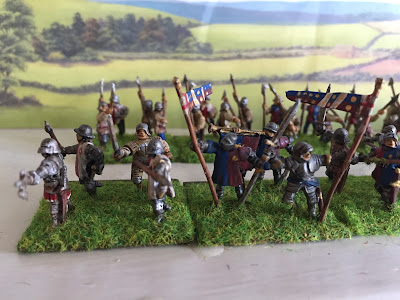 Finally got my first batch of 20mm War of the Roses figures (from Tumbling Dice) finished. A few poses are a bit odd but otherwise nice looking figures.

I've decided to paint by Lord/Affinity rather than by troop type, so do all the archers/billmen/men-at-arms for a Lord's contingent,  and then group them up and base by troop type covering possibly more than one Lord's men. 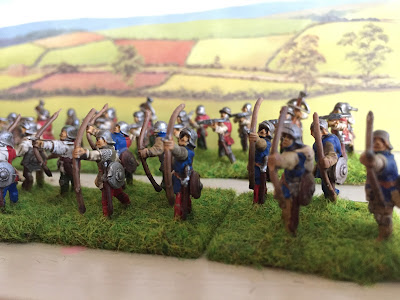 The heraldry/Lords I'm doing and contingency size is based on the Kingmaker game, as I'd like to try using that as a campaign system. If you count Lords badged forces only then its about 1.3 figure per point, but if you include all the post-related and mercenary forces then I'm doing about 1 figure per 2 points, this assumes an ultimate force of about 20 units (each 16 figs) a side (by 2021!)

I'll also start easing in some more HYW style figures, including French, so I can do some chevaucee type campaigns too. 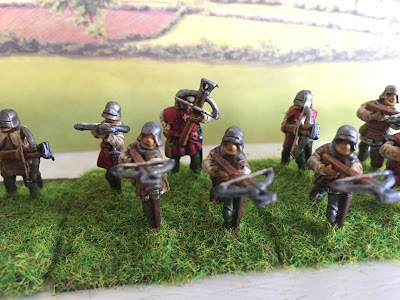 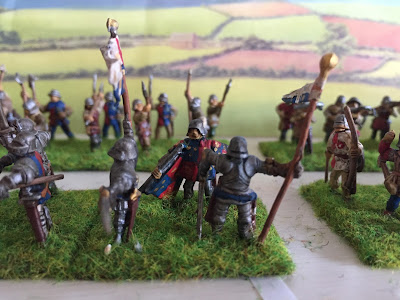 Posted by David Burden at 13:46 No comments: 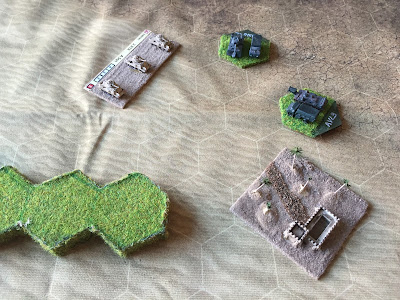 Just taken delivery of a 4cm hex 4' x 6' cloth from www.tinywargames.co.uk. The light hexes work really well, and the mat is a lot darker/yellower than the image looks. A bit shiny but that might go. Will rebase all the Rommel units as single vehs on 4cm hex bases similar to  my existing WW2/1985 units, and then look to play BKC3 when it comes out or my own MechWar (when I finish it), or something else suitable.

Rebasing the figures is going to be a pain though....

Also need to think about terrain - do I do hex shaped (which looks weird) or overlay hexes on the sand hills I've got (which is what I've also done for WW2/1985).

Also aiming to use the cloth for Modern/Afghan and SF skirmish combat - be interesting to compare to the 1" 2' x 2' cloth I got at Games Expo. 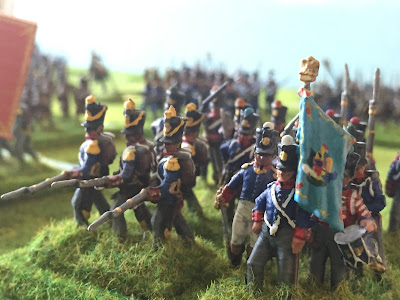 This is the latest chapter in a Blucher 100 Days Campaign that Nick, Alan and I started, and now Nick and I continue. Previous posts under the 100 Days tag.

The French crossed the border on 15th June, but rather than split their forces made a bee-line for the Prussians en-masse. Luckily the Prussians were heading W will all speed to link up with the British, leaving a sole Division to guard their supply lines. A tardy Prussian picquet meant that the French caught the Prussians a day too early, and battle was given at Sombreffe on 17th. It was the reverse of Waterloo with Blucher being heard to say "Bring me Wellington or bring me night!" and Wellington duly arrived on Bluchers right flank in time to stabilise the situation with a wonderful whirling cavalry melee.

At night fall neither side was broken, and no one had all the objectives, so the troops spent the night on the field, and at dawn Napoleon attacked again.

Now read on...
Both sides started with densely packed blinds. As French I decided to attack on the flanks, and its probably simplest to describe each sector in turn rather than tell the story chronologically. All directions relative to the French.

Aware that yet more British were expected the French pushed fast up to and into the woods, pushing back light British opposition. However the British rolled for the reinforcements at the earliest possible time, so they counter-attacked and push the French out of the woods. A fresh French line moved forward but the British were dogged by low Momentum dice for the whole game and so were never able to capitialise on their advantage on this flank, and both sides troops pretty much then sat out the game.

A bit more open ground here made it ideal for Cavalry. The French cavalry pushed forward and ran into a couple of British guns. Their horse gun started inflicting damage, but was then charged by British cavalry and the whole day became a tit-for-tat of cavalry charges and artillery pushed forward, of which the French probably got the better of it, ending with all Allied guns gone, and the (weakened) Household Cavalry being seen off by a 1st (Light) Cavalry Division chasseurs! 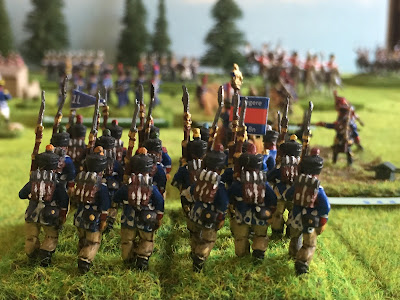 Nothing to see here. The woods had seen a bit of fighting on the previous day, and a whole weakened Prussian Korps spent this second day hiding behind then until the very last turns. The Imperial Guard also started centrally with the idea that I could go and exploit whichever flank was going best, and so from mid-game onwards it moved to the right.

The small hill on the Prussian line had seen a lot of blood shed the previous day, and it would be the same today. The initial French move was a bold reconnaissance by a Lt Cav Bde and a Foot Battery (!), the latter coming a cropper as it passed the edge of the wood (bottom right in table photo) and was ambushed by Prussian cavalry. Once the Lt Cav all saw each other off it was Inf and Arty from the French that pushed forward, a delay from some fresh Lt Cav that had to be cleared away, a Prussian counter-attack and then the assault on the hill , the first wave failing but the YG and MG (and even OG) finally carrying the day. One Chassuer unit it to within 2 hex of the Prussian base-line, and again all the Prussian artillery was destroyed.

At night fall there was no clear victor, a lot of casualties but certainly a sense that the Allies had come off worse as they had lost almost all their artillery and most of their cavalry was weakened.

The final bill was:

So whilst the French suffered less damage than the Allies it was close (19 to 21), but the real hit was a) the loss of most of the allied artillery and b) the Prussians now have 14 units destroyed, once they hit 20 the French have won!

A few comments:
Rather than risk a Sombreffe Day 3 it was decided that both sides would retreat 1 square on the campaign map, and that the battlefield squares would be out of bounds for the next days moved whilst bodies were recovered or plundered.

Before the game moves on though there's a small skirmish up at Gembloux to deal with where a French flying column has hit the Prussian rear guard!