As part of the preparations for our Waterloo60 game(s) next year (COVID willing) I’m doing a couple of test games. Nick had been wanting to do d’Erlons assault for ages, but diaries never worked out, and then COVID intervened.

Having got the central 8’ x 6’ terrain tiles done it was time to get the game on the table. Since I have mostly French (and not all of those) I couldn’t do all the units but managed about 50%, pressing some Confederation of the Rhine in as Dutch/Belgians, Hannoverians and Brunswickers.

For this first game I decided to run it as a “programmed” game, with each Act of the battle kicking off at the right time, and then letting the rules run with it to see what happened. This game would also be solo.

This went pretty much as happened, Jerome just through battalion after battalion against it and failed to get anywhere. The main game learning was I’ve introduced the idea of strongpoints (the walled farms) where there is a saving through for each potential Damage, 2+ for Hougomont, and that seemed to work pretty well. We’re using 15mm models for the buildings (as against 20mm for the figures) as they feel better, but even so we’re only using half the buildings to give it a reasonable footprint.

The Grand Battery opens up. Hadn’t realised how little Guard artillery was involved. As per history they maul Bylandt’s Brigade which is forced to retreat back off the board.

The two(!) Allied batteries on the flank take a few casualties off the deep Divisional columns as they come forward thru the gun line - the more I read the less interpenetration seems to be an issue. The speed of the columns was also very fast, so I’ve upped basic rates. The 95th in the sandpit takes serious damage of Quiot’s Brigade, and eventually causes them to retreat.  The KGL in La Haie Sainte also make their attackers falter.

Bourgogne routs the Dutch screen but falters at the hedge. Donzelot survives the gun fire, but loses the firefight and retreats, with loss of nerve echoing back through the column. Bourgogne takes fire, the British threaten to attack and Bourgogne falls back.

With gaps now opened up the Union Brigade charges forward. The Scots Greys pile into Bourgogne who amazingly holds his ground, and its the same story for Inniskillen vs Donzalet. Failing to break through on the first round they’ll be too blown for the charge onto the ground.

Watier’s Cuirassiers come forward against the Household Brigade, marginally winning against 1LG, and evens with 2LG. The Union Bde finally wins their melees and both French divisional columns rout as panic ripples through the ranks. Jaquinot pulls his light cavalry forward, ploughing into the spent Union Brigade and sending most of them packing. Marcognet fails to go in against Best’s Bde, and Jacquinot’s Lancers take on the Royal Dragoon Guards. Vandeleur moves his light cavalry forward.

Kruse falters Marcognet and actually counter charges, and routs it, taking any remaining French infantry with it. It’s 1600 and what is left of d’Erlons Corps is under a mandatory Withdraw order, and the attack is over, failed in pretty much the same way as historically.

The Allied gun line starts to inflict casualties from the start as the dense mass of French heavy cavalry move forward. There are about 7 regiments moving, against 5-7 batteries. By the time they get about half way half the regiments have take 3 damage (so can't assault), and two have taken 2 damage (so can assault but little chance of success).  The French try and rally a few strength points and then charge all in. Three regiments are routed, 1 is staggered and the attack is called off.

Reinforced by Watier's cavalry from their right flank the French try again. The French guns fire in support causing some damage. The Allied guns try some counter-battery but only 1 in 4 hits. The new assault has 10 regiments in it. French guns continue to damage the squares, most taking 1 or 2 damage, a Guard square being down to 2. The Allied guns send one or two cavalry regiments home but the others begin to make contact with the squares. One gets repulsed by the guns at short range. One survives the guns, hits a square only at 2STR, but the square holds and the cavalry falters. Another square does similarly and 3 more also hold and force their attacker to retreat.

The second French wave of this new attack now hits - 5 regiments riding in against squares, none opposed by guns as the crews have been forced to take cover by the first wave. The French have also brought their horse artillery right up to further pile on the pressure, and the first square is broken by short range cannister. In the cavalry attacks 2 badly damaged squares are broken, but the cavalry forced back as they hit the next squares. British Light Dragoons and Hussars clear off any lingering Cuirassiers and the cavalry attacks are over, the French well spent, and only 3 squares lost.

Foy led off the attack with his infantry to the W of La Haie Sante, suffering hits along the way from the Allied artillery. At 1900/Turn 25 the Guard moved off. One battalion storms an Allied battery and piles into the square behind, but another battalion is forced to retreat and another two stalled by gun fire. Foy tries to motivate his lead battalion but the refuse to go in. The British counter-attack and Foy is sent packing.

3rd Dutch Bde and Adams Bde deploy forward to bolster the line. A two battalions of Middle Guard charge home against poor British fire. Both melees end with both sides spent - the squares break, but the French are unable to exploit and the Middle Guard is routed next turn. Allied guns maul the Old Guard battalions but one gets in but is routed by the melee.

End of Turn 33/2140 and time to call ENDEX. The Allies got a bit more of a battering than in reality, with a few squares broken, but the French had no cavalry to exploit or reserves of infantry left to exploit.

Overall I was very happy with how the game went. The results seem pretty much in keeping with the historical outcomes, all the the actions had a reasonable narrative, and crucially I was getting through a turn every 20-30 minutes, playing both sides. So all bodes well. Next to try it with an opponent!

Posted by David Burden at 20:33 No comments: 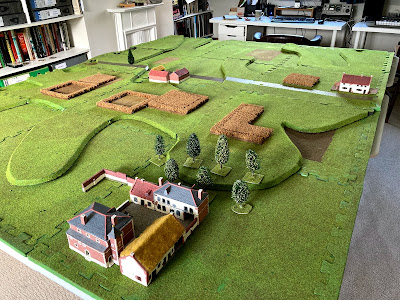 As part of the prep for next year's (hopeful) game of Waterloo with Adrian and Nick (in 20mm, 1:33, 1mm=1yd) I've been working on a terrain test on and off over the last few months. As mentioned previously we've decided to use Halfords 60cm x 60cm "rubber" floor tiles as its way cheaper than Hexon, and makes square (10cm) grids easier which I'm coming to prefer over hexes for tactical games.

The test zone is 4 x 3 tiles, so 2.4km x 1.8m and covers the main conflict area between the British and French, from Hougoumont, thru La Haie Saint to almost Papelotte. 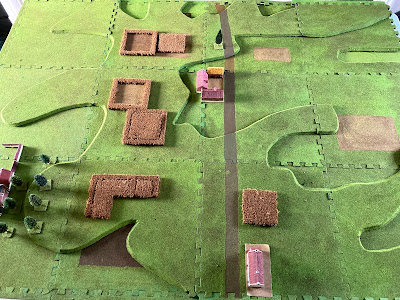 Overall I'm pretty happy with the result. A light extra dusting of flock on the joins kills the zig-zag edges if found off-putting, and the tiles above all have dots every 10cm that disappear when you are more than a metre away.

One lesson from the first tiles I did is that the PVA needs to go on neat and think, no watering down. Also mixing static grass with a dark earth flock gives some lovely and very natural variation on every tile. I sprayed in hairspray to reduce the loss of flock in use.

I've marked out "random" field areas and used a lighter flock for those, with the option of putting doormat cornfield on top of them. Roads are painted in, but may be textured/flocked, or I might put my road sections over them. I cut the contours to follow natural curves - initially I'd thought about making it more blocky, just at the 10cm divisions, but the way the tiles work I don't think it would increase the future flexibility to rearrange the tiles. Having done the first few though I did end up with a couple of annoyingly small re-entrants, so might make sure that every element is at least 10cm.

Here's the schematic for the whole area - the tiles above are the 12 more or less in the centre. 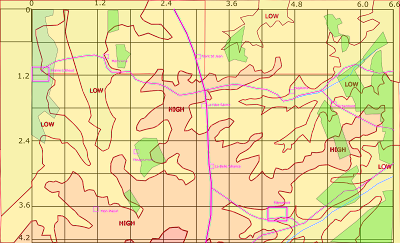 Here are 6 of the tiles around La Haie Sainte laid out and the contour lines drawn on with chinagraph. 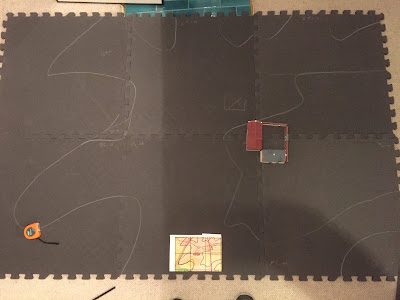 Here's the layer cut out and placed on the lower layer. 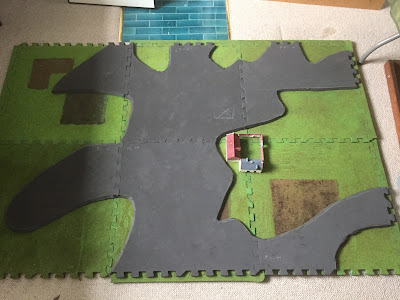 One issue was cutting the contour slopes. I'd found that ordinary Stanley knife (box cutter) blades were too short to do in one cut, but I found some 6" blades on-line! 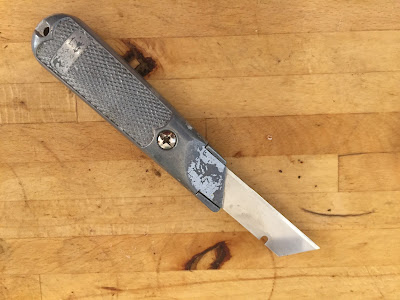 Tiles get a coat of Emerald Green Dulux, which gives a really good and bright base for the flock/grass mix, and as mentioned above PVA was applied thickly before using a sieve to shake the mixture onto the glue. The final spray with hairspray to encourage "hold". 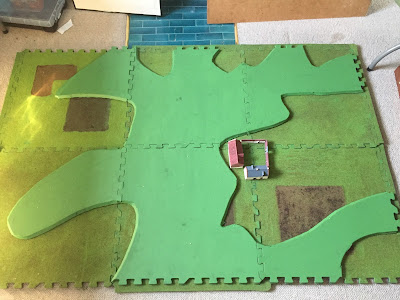 Now time to lay the troops out! 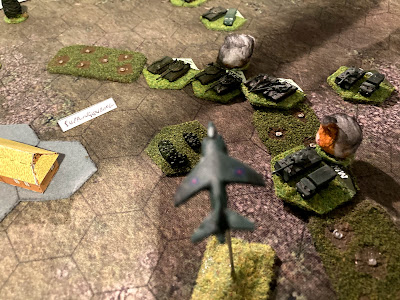 Played through the Königslutter am Elm game in 8 turns over a total of about 3-4 hours. A bit of a blood bath but a useful outing for the rules.

The Soviet 1/62 Gds Tank Regiment took the northern route from the Lappwald through Süpplingenburg to Konigslutter. They hit the minefield in front of Süpplingenburg head on, and the combination of Chieftains and Harrier ground attack managed to take out the mine-clearing tanks and lead companies. 2/62 GTR then came up, pushing through and round the wrecks of 1/62, and inflicted enough damage on 3RTR BG to push them back from Süpplingenburg, and on through Schickelsheim to join a final defence at Rottorf. 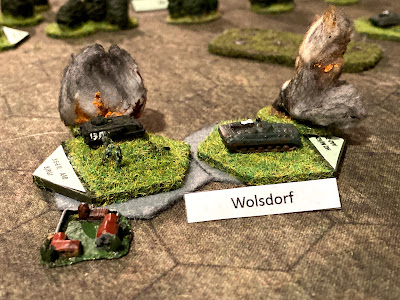 On the southern flank the MR/BMP Bn of 62GTR took the lead, and had slightly more luck with the minfields. But the RGJ BG dug into Wolsdorf and Warberg held the BMPs off until reinforced by 3/62 GTR and stonked by repeated 2S1 and BM27 missions. A BMP assault was finally needed to clear the RGJ out, who then fell back through Rabke to join the final defence of Konigslutter. By this time the RRF BG was the only capable fighting force, whilst the Soviets still had 2/62 and 3/62 going strong, and elements of M/62 and ENDEX was declared. 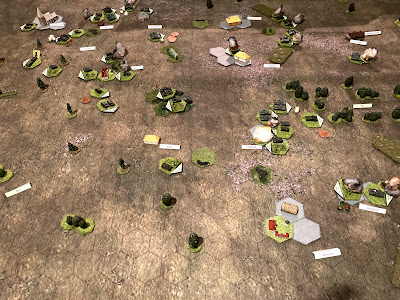 It was evident pretty quickly that the Attack-Defence model that I'd used in the BAOR/Corps game didn't work too well here - mainly as most combat was ranged and so the attack/defence model meant less. I'll probably recast to Anti-Armour/Anti-Infantry next time - which is what an earlier version had.

The dice per platoon model worked well though, and happy with the attack values for most combats, and the assaults worked well. Indirect fire seemed a bit week, should at least suppress every time. Ground attack/helarm also seemed a bit weak, but air defence did its bit and took a Harrier and TOW Lynx sortie out.

I massively over-allocated the LOG/Activation tokens, both sides barely using half by turn 6. Will significantly scale down next time. From turn 6 I zeroised the tokens and went onto the A1 roll which made for more thinking about allocation but still a bit generous. The model felt good though.

The overall scale and effect was pretty much what I was after though - this felt like a Brigade game, not a company or platoon one. So iterate the rules and try again, perhaps at Bn level whilst I have Waterloo on the main table, and do another Bde game in the new year. 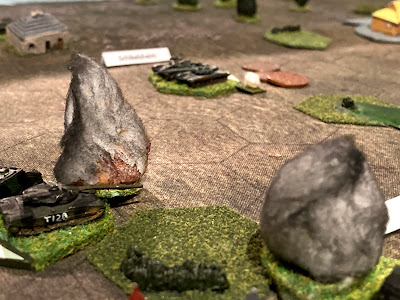 Posted by David Burden at 01:13 No comments: