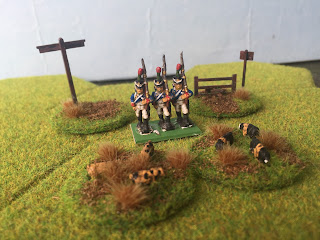 Next batch of 20mm scatter items, mainly from Salute:

(Actually none of that lot from Salute!)

Posted by David Burden at 13:19 No comments: 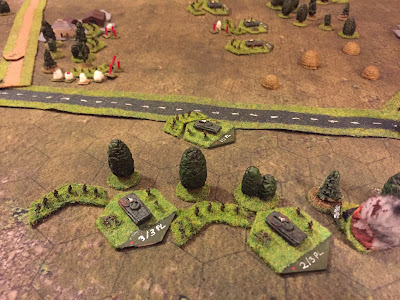 The last session of the CWO playtest was on the assault rules. Never quite been sure of them and they've changed more often than more or less anything else, but think they're about right now.

2 Pl BAOR is dug in at Repelen (top left) with 2 Pl 311MIR attacking from the front (top right), supported by 3Pl 311MIR on the flank (bottom centre).

3Pl managed to destroy 3rd Section 2Pl from sustained suppressive fire. The lead BMP stuck out in the "open" had some lucky escapes from two Milan fired from its flank off screen. 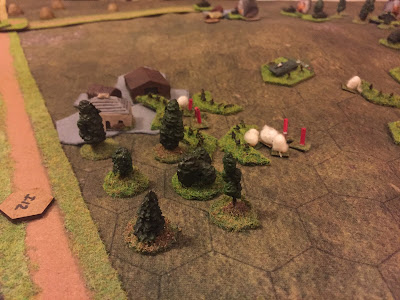 2Pl 311MIR closed, taking damage and suppression as the troops ran across the "open" ground, but their supporting BMPs kept suppressive fire up against 1 and 2 Sections, 1 Section in Repelen itself taking the most damage. 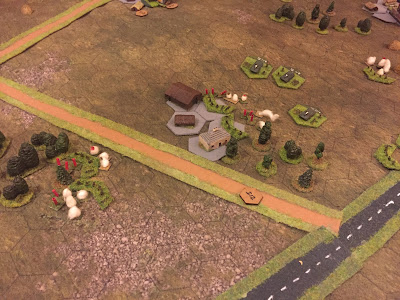 As the two sides finally came to blows the first round was inconclusive, as was the second. But the attrition built up, with first one of the Soviet sections falling back (top right), and then finally the two remaining British sections (bottom left), leaving the Soviets to occupy the village. With that I decided to call the playtest to an end.

At first I thought the melee rules were not aggressive enough, but with each turn being only a minute or so, then 3-4 minutes of full-on combat  to clear the weakened platoon from the hamlet and wood seems not bad, and it was by attrition and the platoon slipping away once the position was untenable, so not bad I think.

So overall I'm really happy with this latest iteration of CWO, and I think there are only a few tweaks needed to make it ideal (for me!). The next test of it will be WW2 North Africa, and then some time in the autumn I'll try and do an all-arms MRR attack against a BAOR BattleGroup. And of course I've now got some 10mm Moderns to try it out with too!

However this table, which remember started life as Adwalton Moor in 20mm, is still not finished as I picked up Sabre Squadron at Salute so I'm going to keep this scenario running, but with the fight out from Repelen onto the third line of the BAOR defence run on Sabre Squadron.

Posted by David Burden at 13:58 No comments: 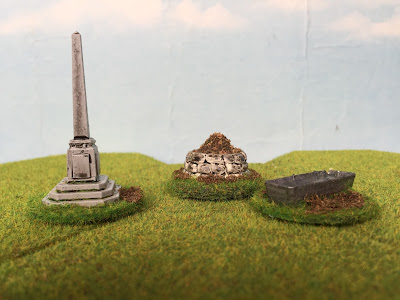 Finally got the first batch of Salute scatter terrain pieces done. Here in 20mm we have: 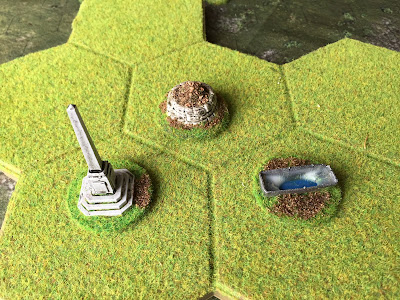 (PVA still drying in trough - or could be ice!) 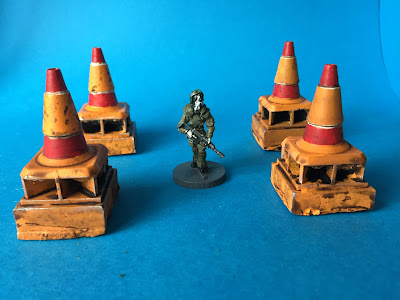 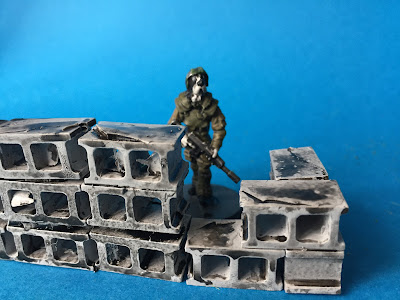 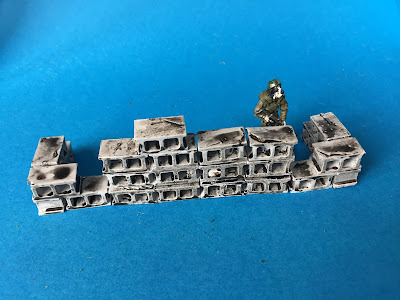 Beavering away on the next bunch.

Posted by David Burden at 13:29 No comments: 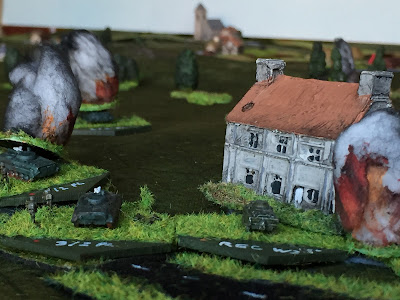 The CWO playtest is progressing well. Shots were exchanged between the Chieftains and T64s, the T64 ERA saving at least one shot. With one Chieftain lost for no T64s (but lots of suppression/button-down) the Troop decided to pull back to their #2 positions. The recce Scimitar did manage to take out one of advancing BMPs although its troops escaped.

One the left Russian flank the 3rd BMP Platoon pushed well forward, flanking and eventually killing the second Scimitar, and then pushed on and caught the MFC unawares and took him out, the FOO wisely deciding to withdraw. Pushing further forward the Platoon came under Carl Gustav fire from the British #1 Platoon, but the fast moving BMP was hard to hit. The BMP replied with 75mm rounds into the wood which caused 2 damage points (section can take 5). The Milan team also now had a theoretical sight-line to the BMP, but cover and dips meant it couldn't get a good lock. With #1 Platoon engaged to its flank the Soviet 2nd BMP Platoon broke cover from the forward villages and pushed on towards their front.

The game now gives a good opportunity to test out the infantry and ATGW rules.

Posted by David Burden at 13:34 No comments: 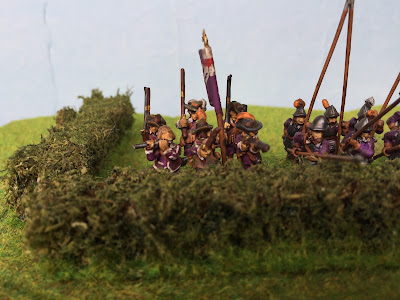 Whilst making some haystacks from a rubber-backed coir mat based on ones I saw at the "game in a barn" last year its struck me the mat could also be used to make some nice and organic looking hedges. The results were (I think) superb, and it only took me about 3 hours to make 12 feet of hedge at a cost of probably less than 50p per foot. The coir underneath shows through as the wood branches, and the irregular nature of the coir makes it look very natural.


I'm sure many others have already found this technique, but for the record (and my memory!) this is what I did:

Here are some image of the final hedges. 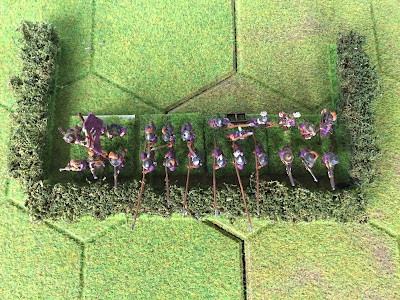 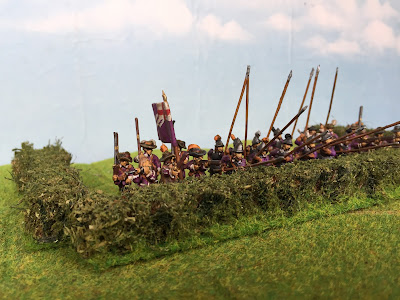 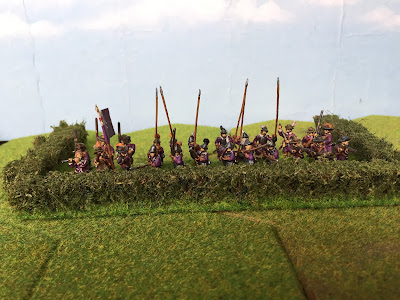 As you can see they are ideal for a low 20mm hedge. To get a "high" hedge then sticking two strips back to back, and then stick the "top" of the lower one to the base should work fine - will try that next!

Now that's out of the way I can get on with my Salute items!

Posted by David Burden at 13:10 No comments:


The more or less annual pilgrimage to Salute yesterday. Overall impressions were that big games were (as ever) fewer on the ground - struck me that there were few tables bigger than Nick and I could put on (although a lot better terrain and figures) and no real stand-out set pieces. Also quite a few empty tables (no shows?), and bored looking wargamers by static tables with no information (WHY?!) That said a few tables did turn to chat if I looked for more than a few seconds which was great to see. Trying to get close to retailers before lunch was impossible, to tempted next year to do games first and buying in the afternoon (instead of recce first then buying, and no time to game). My mistake was to have a big shopping list, some of which I could (should) have pre-ordered, so I could spend more time just hunting out oddities for clutter which was my real aim.

Game-wise, these are the tables that caught my eye - attribution where I remember to note it or could work it out from the guide, apologies if any are wrong. 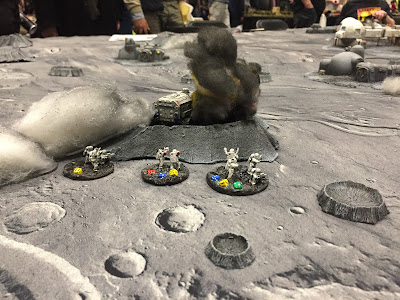 Things  I spotted but didn't buy now but may get in the future:

Hexon - another full box of hexes and some A1 and C1 slopes. Plain green as I want to turn a lot of these into fields, oblong, straddling two hex units, so as to break up the hex look a bit more. Had a brief chat with Sally about borrowing/hiring some hexes for the big Waterloo game in 2021 - we'll see.

Tumbling Dice -  Units of WOTR handgunners, levy bow and Currors for my next WOTR painting batch.

Timecast - First of the new era/scale/theatre tracks with roughly a platoon of 10mm 1984 BAOR and Soviets, plus a BMP and Scimitar. These are meant to just be a test purchase to see if a I like the scale, which as I think I've mooted here before could be my new scale of choice for some games. Whilst 6mm is great for big mechanised battles the infantry is too small to make out, so if doing combined arms at Coy-Bn-Bde level then 10mm could be just right. The display models looked ace, can't wait to get them on the table and try them out with CWO. Also got the Sabre Squadron rules, heard  lot about them and the Timecast guys like them. Doubt I'll prefer them over CWO but always good to see what's out there. 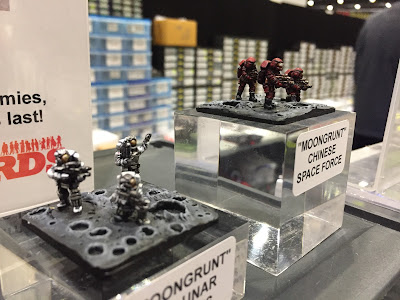 GZG/Brigade - I loved the Moongrunt figures when I saw them last year, so this year I succombed and bought about a section each of US and Chinese. Although the Brits are meant to be "Gerry Anderson" style I like the bigger backpacks of the US figures - makes them far more "now" rather than just regular SF. 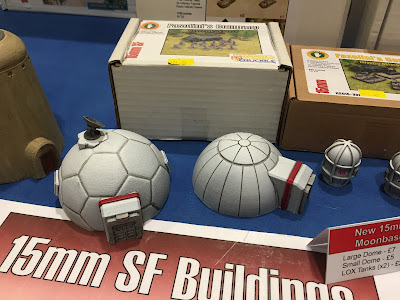 Picked up a couple of domes to go with them from Brigade. Aim to pick up a small moon mat at Games Expo, and realise now I should have picked up some craters - but should be able to do those with DAS. Doubt I can reach the heights of the Moonbase game above though.

Sally 4th/Albedo -  The APCs look better in the flesh than in the photos, but for now contented myself with some otter/beret Confed Homeguard. Looking forward to the Boarding Action Kickstart in the Autumn to get some bunnies in spacesuits!

Roads/Rivers - I'm still trying to find the best road/river option. My felt roads work tolerably well for 6mm. The Hexon roads/rivers need a bit of roughing up and whilst the rivers are good for unfordable ones they are no good for streams/linear obstacles. And most of my rules ignore battlefield roads for pre-mech so don't really need the hex format. Spent some time (not enough) looking at what other people were using. For roads just MDF/ply with DAS surface, painted brown with flocked edges seemed common and did the trick, so ought to do those myself. Rivers need to be a bit more irregular. Adrian gave me some latex ones ages ago which were about right, but a bit too curvy for hex, but turns out Timecast does a nice range, all fairly straight with a variety of sizes, curves and fords, and only £5 for 2 foot. So picked up a set to play with. Could be ideal. Might get some of their latex fields too.

Then its on to all the clutter that was meant to be the focus of the buying:

6mm - Some mine markers from The Square (already have some, wanted more but didn't realise it was The Square they came from! Some "barbed wire" from Northumbrian Painting Services /Reiver Castings (£1 for 1m!). Three "Barrack Huts" in MDF from Blotz, which can also do duty as farm/industrial buildings (see undersize for 6mm but that's fine by me). 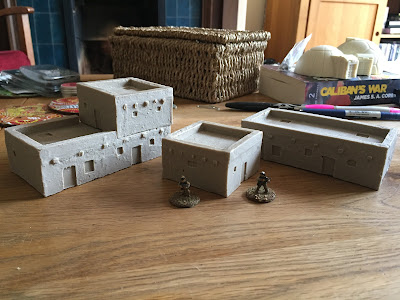 15mm - 3-4 more desert houses from The Square. Just love the stuff those guys go, cheap but great designs. Pity they didn't have any more walls though, time for more foamboard and DAS!

20mm - A field water trough and some dead cows (!) from Sgts Mess (Napoleonic memoires seem always full of dead cows). A smart town stone water trough and set of gabions from The Square (again). A "thing" - looks more like sandbags piled in a circle around a heap of dirt, but should paint up as a nice stone "thing".

28mm -  A vertical wind turbine thing and a skip from Blotz (my monthly 28mm clutter purchase). Four pylony "things" (they were in the mishapes!) from  Zantric (?) which should look great in orange, and two bags from the same people of what look like big breeze blocks (again mishapes) - £3 for the 3 bags!

Final bits were some round MDF bases to put some of this stuff on, some smaller ones as a way to the markers for CWO and other games (can never find the combination I need for pre-printed ones), some yellow grass tufts to decorate bases, and some blank red and green D6s for my new "DM" dice - more later.

Posted by David Burden at 12:46 No comments: