I finally got the chance to play with the Beta of the full ACP164 ruleset. Time (and space) only allowed a small scenario (6mm FKaP Adwalton Moor is still on the main table), so I had 4 EDF patrolling through a starport district (wonderful SF ISO containers from Wargame Model Mods - more on them once painted up) about to be ambushed by two ILR critters.

The intent was to test the new bits of rules, and in particular:


In the end I played the scenario through twice, once with the EDF clustered as two pairs, and once with each EDF pair starting from opposite ends of the base line.

In the first run through EDF kept failing to spot the ILR man on the container roof, and in the end the critter had to open up on a reaction roll before the EDF disappeared into her blindspot. EDF rapidly returned fire and took her out. Her colleague then took a morale check and decided it was "death and glory" time and charged out into the open firing at the nearest EDF, caused a wound but was brought down in a hail of bullets.

Second time round the she-rabbit was spotted immediately. Both EDF teams dashed forward (no real suppression option) and the boss caught a wound but shrugged it off and hunkered down in cover. The right hand team got close enough to use their UGL and after a first overshoot scored one hit. Then a second miss (this one almost taking out the 2nd rabbit), and the fourth on target and one dead rabbit. Her colleague took a morale test again, and this time thought better of it and retreated back off the table.

All in all the new rules worked well. I'd like to see a few more factors on spotting, and something around character pose/stance, but could probably fix that and a few other things with some house rules. The card system works so quickly and smoothly I think you'd then have the best skirmish set on the market - and I haven't even started with the zero-gee and blowing holes in walls rules yet!

Posted by David Burden at 14:02 No comments: 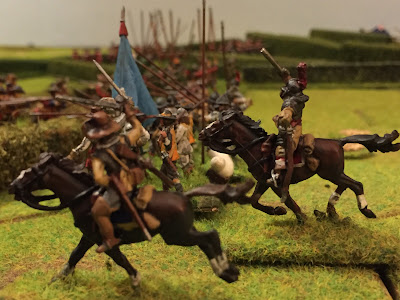 Next in my series of chronological ECW battles is Adwalton Moor. It's quite a different one as the ground is dominated by the enclosures right in the middle, and the inbalance in pikes and muskets (and horse)  between the two sides. But it's a nice sized battle (c. 8-10 regiments each) and a better test of rules than the brief skirmish at Roundway Down.


The original intention was to play this with For King and Parliament, and I set it all up with 20mm on the Hexon (so ground scale about 100m per hexon, frontage scale of 50m per hexon - so a bit crowded). I ordered the rules, and then due to a postcode mixup with auto-completion the rules spent about a week or so in the Birmingham sorting office. Not wanting to hang around I decided to crack on with the game with my own rules (currently called  ""I die by these things" - not 100% happy).


The Royalists went straight into the attack, with the big cannon doing a bit damage the musketeers in the enclosures before friendly-fire became too dangerous.

On the Royalist left flank a the Purple regiment rolled Elite for quality (I roll only as each unit needs to know) and ploughed into the weaker commanded musketeers defending it. The musketeers were pushed back, but a second line Red regiment moved up to block the Purple's exit as they made there way through the enclosures.


In the centre it was even bloodier, with commanded musketeers and dragoons suffering frontal attacks from  infantry and horse, and a flank attack from the Royalist dragoons. It eventually all got too much and the Parliamentarians pulled back over the ditch and out of the enclosures, and the weakened Royalists poured in.

On the right flank the Royalists tried the outflanking manoeuvre which had worked so well in real life, but another Red regiment blocked their way, and good musketry saw one horse regiment off, but no worry, a second was on it's way.


That was pretty much the initial Royalist high water mark, because then the tide turned.


On the left the Purple's were pretty weak by the time the reached the far end of the enclosures, and the combined fire of the Red and the now recovered musketeers broke the Purples. A regiment of Horse was though still trying a southerly outflanking manoeuvre.


In the centre the Royalist units holding the enclosures were pretty fragile from losses suffered on the way in, so once the Parliamentarians had reformed outside the enclosure, and now protected by the ditch they were able to cause several units to fallback, and then domino style there was a pretty comprehensive rout of the Royalist 1st line.

On the right the Royalist 2nd line cavalry was no better than the first line, driven off by fire, and taking its recovering partner with it.

With a bit of breathing space the Parliamentarians moved back into the enclosures, ready to receive the Royalist 2nd line in the centre, but now with a safe left (P) flank.

It then went downhill quite rapidly for the Royalists. On their left flank the probing cavalry came up against well positioned Parliamentary pike and shot who sent them packing. Roundhead cavalry then gave chase, but the Royalists kept in reasonable order as they pulled back, their pursuers being slowed by some good shots form the guns. In the centre the Royalists pike couldn't penetrate the enclosures, with Fairfax's dragoons and commanded musket pouring fire into them, but they managed to push forward a bit on the left, but then started to receive flanking fire. On the right flank the Royalist reserve Pike tried to come through the empty enclosures and onto Fairfaxes flank, but again the defended hedgerows were too much.

The mounting damage and demoralisation had the Royalist on the verge of withdrawal for a turn or two (they dipped below the 50% level mid-term, but some prompt rallying saved them), but then the Roundhead cavalry caught up with the Royalist cavalry just as they pass through the gun line, and Newcastle's vantage point - it was carnage and it was all over. 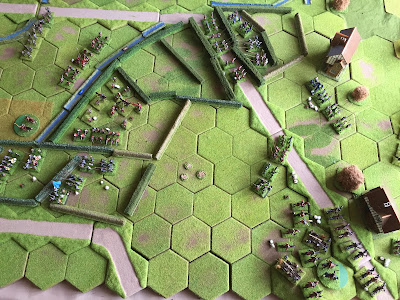 
A good game I think, and pretty messy with all those enclosures so no great crashing together of pile lines and push of pike. Slight feeling that musketry was too powerful - regularly seeing off the cavalry, although holding the hedges was more balanced. Also not many real infantry melees as resolve waivers before that - but that is exactly what SLS was always meant to make happen - probably need to double check if its as true for ECW. Also not sure that the SLS Retreat rule is right for ECW - particularly if you're carrying a huge pike - if you do have to withdraw my guess is you drop the pike and run - again more reading needed. But otherwise pretty happy with the rules.

So now time to play through with For King and Parliament as the rules have now arrived, and swop out all the 20mm troops and hedges for 6mm ones - so should have a less crowded battlefield and 1:1 frontage to hexon ground scale (both 100mm). 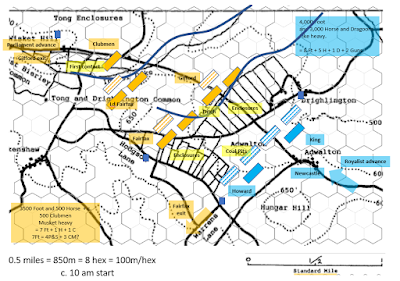