Having finished my 6mm Medieval a month or so ago it's time to play a game with them - and what better than Agincourt. I'll be using Kallistra's Hordes and Heroes again which worked pretty well for Bosworth last year. I use single 80mm width units, and then just use damage markers to simulate the reduction in "bases" from 4 to 1. Given that H&H is about 1 hex = 100m, that makes each of my units about 4-500 men assuming 4-6 deep.

One mistake I made ages ago was interpreting (mainly from popular media!) those MAA as being mostly mounted, hence I bought about 4 packs of Mounted  MAA to paint. Now I prep for the battle in detail I realise that only about 2000-2500 (4-5 units) were mounted, and the rest were DMAA - so I've had to supplement my meagre DMAA stocks with Bill for the game (but treat as DMAA). I'll do another pack of DMAA next year to give a decent amount for other battles.


The battlefield lays out quite nicely with Hexon, that alley of death between the two woods, and a slight rise at either end - and an English baggage train ready to be sacked at the far end. All terrain is being counted as broken to reflect the sodden state on the day - so all move at 1, no impact, but I will allow missiles to fire over it.


The final orbat I'm going with is:

I've given the two French advanced MAA and the two English flanks of bows their own Commander under H&H (Move1/Range1), otherwise they would fall fowl of command distances.


The aim is to roughly follow the historical battle, so English move forward (just 1-2 hex), French cavalry charge, French Van attacks, and we'll see where it goes from there!

Posted by David Burden at 13:53 No comments: 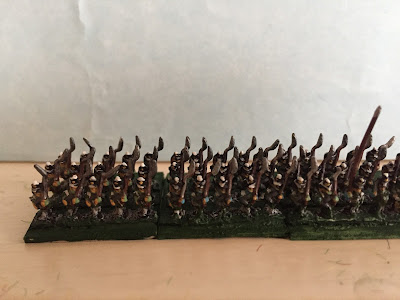 This months figure painting batch is just over half a Corps worth of Russian Napoleonic from Baccus.  I already have a similar number, but they were some of the first 6mm I painted and were slighter Heroics and Ros figures that I was given by Alan. This is the first Russian lot I've done with Baccus to being in to line with the rest of my armies. 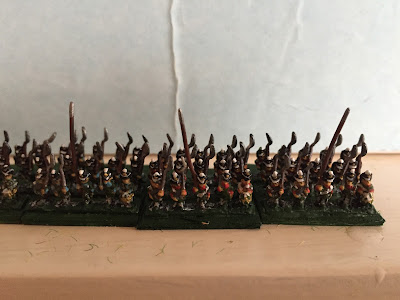 The first units painted are 6 battalions (15 figures each, so about 1:33) of Musketeers. Also in the batch to do are:

That will actually bring my 6mm Napoleonic painting to a close (sorry Peter!). Although I have promised myself one month of 6mm painting each year to paint whatever Napoleonic/Medieval/ECW takes my fancy!

Without a macro lens and a flash I'll hold off on any more photos til the whole batch is completed!

Posted by David Burden at 19:24 No comments: 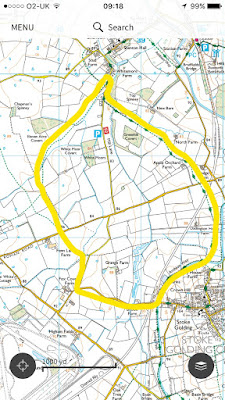 Having acquired a dog it appears that one of the advantages will be an increase in the number of battlefield walks - you might as well have walkies somewhere interesting!

For a first outing we went to the "new" Bosworth battlefield. We Parked up at Shenton and then walked across the huge fields to Fenn Lane Farm - pretty much through the Yorkist front line an into no-man's land according to one of the current interpretations. Crossing Fenn Lane we then walked over more fields (all arable, one incredibly ploughed up, Agincourt like) and through the Tudor lines. As we approach the canal and foot of Crown Hill on the only bit of road the fisheries and ponds gave a hint of the "mere" that was once here. Cup of tea by the canal and then along the canal (not there in 1485!) before finally striking back NW across the fields, just behind a supposed artillery location, to the start.


Nice walk, not very scenic, but certainly shows how flat and open this space is comparison to the "old" site, and the Crown Hill ridge is a very mild rise above the rest of the terrain.

Posted by David Burden at 13:45 No comments: 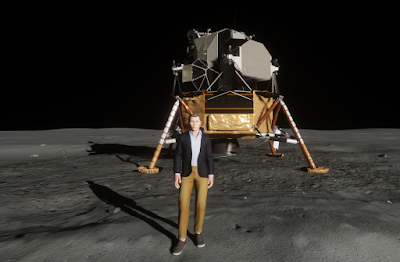 I finally found the time to try out the Project Sansar "virtual world"/"social virtual reality"  - the latest offering from the operators of Second Life. I was disappointed and can't say it scratches any particular itch I have in the VW/SVR space. You can read my full write-up on the Daden blog.

The one high point though was a really nice Apollo 11 virtual museum with a huge 3D model of the timeline and earth-moon trajectory - complete with mini-models of the LEM/CM/SM. 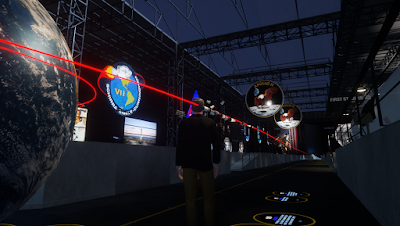 Posted by David Burden at 19:34 No comments:

Well, that was over quicker than I expected! At the end of Turn 21 (1pm) it still looked like the French had  a big ask and they were running behind the historical timetable. But clearing the Prussians left of Poppel meant that another Prussian brigade was below 50% and so had to withdraw. That meant that the Prussians had lost 3 of their 8 brigades, so one more would put them at 50% and it was game over!

It was to the French centre and right that the glory fell, as left flank was now faced by the Prince of Orange's two fresh brigades.

DeBilly's 1e Bde of Morand's Division tried again to take on Wedel's Bde but was repulsed. But 3/21e Ligne of Petit's Bde had just made a nice move against a very weakened IR5 of Reynouard's Bde and sent it packing. It had to halt but on Turn 22, still formed it swung round to its right and piled into the side of Hanschstein's Grenadier Bn. The Grenadiers just about held, but 1/85e Ligne of Gauthier's bde moved up to join the fray and it was all over - Wedel was now below 50%, and his withdrawal put the whole force at 50% - Game Over!


The Prussians only had two serviceable brigades left - Orange's reinforcements, and fragments of Kloch and Greiffenberg. The French had two totally fresh brigade's from Morand's division which were only just reaching the front line, and another 2-3 brigades in pretty good shape - so its reasonable that the Prussians withdraw, and be hotly pursued by Davout - pretty much mirroring the final historical result.

One oddity concerned light cavalry. According to the orbats the Prussians had tons of it, most of which I put on the table (less Oswald at Suiza). Battle reports talk about Bunting, Quintzow, Irwin and Blucher, but suggest a certain amount of confusion and no indication that they had any real impact on the outcome apart from the initial clashes. I had them all on the table but it was obvious that if they were all let lose the 3 regiments of chasseur son the French side would soon be beaten off and the Prussians would have field day, so in the end I more or less matched the 3 French ones, but otherwise had them sat watching. I must re-read the accounts to see if I can get a better sense of what was happening. It may be that the majority was just assigned to flank guards, and in true light cavalry fashion didn't fancy getting involved in the mess of the battle!

There was also not as much town fighting as I expected, mainly since the gap from Hassenhausen to Poppel is pretty big and gave the armies enough to deploy, and Hassenhausen was taken very early - again worth a re-read.

Posted by David Burden at 13:51 No comments: 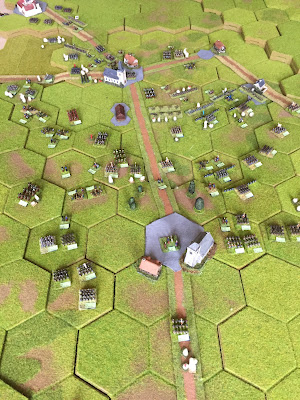 Slow progress on this game as various real-life events have intervened, but finally getting back on track.

Currently at end Turn 21, so 7 hours in, about 1400. French are behind on the timetable, the push out from Hassenhausen (lower centre in photo) being frustrated by the density of Prussian troops forward of Poppel (top centre with church). However around 1300 major clashes on the French left flank (left of photo) came to and end and both sides had a couple of Brigades rendered hors d'combat and exiting the field. This has now opened things up considerably. However on the left flank the arrival of the Duke of Orange's men is enabling the Prussians to put up a firm new defensive line between Poppel and Gernstedt (top left of photo), although the arrival of Morand's Division is giving the French new men to throw into the fight.

The French are also progressing slowly on the right flank, finally moving on Zackwar (upper right of main photo), but initial results have been mixed - again Morand's men may enable them to push through.

The SLS rules are still working well. The big change I've made this time is how over/under strength works. It used to be +/-1 DM for every 15% difference in numbers, I then stretched that to about 30%, but I still found that it made big units almost invincible. So this time round I've broken with my "every unit has 5 damage" mantra, and instead let large units have a capacity for 6 damage. This means that they don't cause damage any worse than a smaller unit, and can take damage at the same rate, but they can absorb more of it - which seems a fair compromise. Working well so far.

Once nice little vignette outside of Poppel. Three French bn from Lochet's 5e Bde fell on Prussian from Reynouard's Bde in front and S of Poppel (in the two now empty hexes above). The two on the French right won, but suffered heavy casualties. Whilst they were regaining order (and with Prussian Hussars loitering with intent N of the road sharpening their swords), the third bn lost its fight once a fourth Prussian bn joined the fray (those units now in front on church with red marker by them to denote disordered). The French battalion routed, and in a morale check took the adjacent recovering French unit with it. That then caused a morale check on the 3rd (most northerly) French Bn, which managed to stand, only to then be cut down by the Prussian Hussars as soon as they were activated. The Hussars then chased the routing French deep into French lines, and came to a halt, unformed, just by some French chasseurs. On their activation the chasseurs tried to charge the Prussians, but were too close for a full blooded charge, and anyway the hussars were effectively in open order, so the Frnehc just round through (both sides got the Open Ranks result - quite common for light cavalry). Come the next turn it will be a race to see who moves first, the Prussian hussars back to safety (but still disordered), or the French chasseurs trying to avoid another Open Ranks result!

Lancers of the Imperial Guard


June's painting batch, actually done in July and based in August, were the two regiments of Imperial Guard Lancers - 1st Polish and 2nd Dutch.


The figures are Newline 20mm, and 9 to a medium sized regiment (so about 1:33). I know that the Guard cavalry regiments were huge, but I already have two regiments in plastic, so all-in-all I should have about the right number of figures now.


In doing the Dutch Lancers I discovered that about 1/3rd of their squadrons were "Young Guard" and so had blue, not red, uniforms, hence the blue guys on the left of the photo above. This may be why some eye-witness accounts mention being charged by blue lancers, even though some (one?) writer I've read then dismissed this with a "only the Dutch were at Waterloo so must have been mistaken" line.