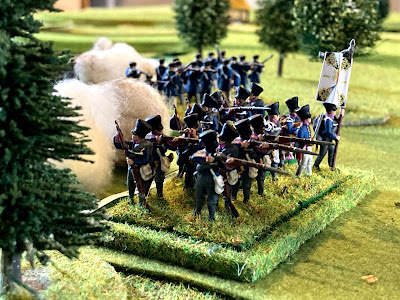 As part of our continuing preparations for Waterlo60 Nick and I played out the Prussian arrival on the E flank over the last week and a bit. I picked up a Prussian Corps from Adrian and I had enough French. The game was all done remotely with Nick/Blucher's view limited to a blurry webcam and an iPhone on Jitsi, but we managed to get through it. I think we did four evenings in the end, each of 1.5-2 hours.

I just managed to fit the whole of the SE quarter of the battlefield in my gaming room, so 5 x 3 two-foot square tiles, a quarter of the full 10x6 tile layout (all of which are now done hurrah!). T

The battlefield started completely empty apart from Squadrons of 10th Hussars on picket duty. One of the big issues with Waterloo games is how you handle the Prussian arrival, the Liphook game had the unedifying sight of the Young Guard lined up on the table edge to stop the Prussians getting on! I there forbid the French to move forces E until the Prussians were “sighted” just off table, and then they could only move up to Lobau’s historic position just short of Fischermont.

One Prussians actually arrived on table they had free movement. For the Prussians their order of arrival was set by the march order of the Lasne bridge (been there, great cafe nearby), but arrival times depended on dice rolls, and there were also randomisation as to whether they arrived on the S, middle or N arrival points. The net result is that Blucher doesn't know exactly what he's getting when, and where. All worked really well for IV Corps, most unit actually arriving very close to historic timings, but II and I Corps both failed to show by 8pm, so may adjust a bit. Since we didn't have the NE quarter of the battlefield Blucher also had less space to deploy in, poor avenues of exploitation, and less chance to threaten Lobau’s N flank, so a bit more challenging than in real life.

A bit of a log jam initially (and throughout?) as the majority of Prussians came on at the S entry point, where they are hemmed in by woods, and the French had copied Lobau by putting a stopper and the end of the defile. It wasn’t any easier in the N where the board edge meant that units coming in at the central point either had a 100m gap to squeeze through or flog through the woods.

Most of the early battle was taken up with cavalry duels, but since everyone only had light cavalry these usually results in both sides being bounced back and then recovering for a few turns. The Prussian cavalry, lots of Landwehr had some very weak units who could hardly be committed. Twice a Prussian Horse battery got into position only to be run down by French lancers.

All the cavalry actions though couldn't stop the slow juggernaut of the big Prussian infantry regiments moving forward. They were big enough that they could take the French guns on without totally losing it, and even sustain some meleeing with the French light cavalry (one regiment even charging some disordered chasseurs who hadn’t had the chance to pull back after a melee).

Gradually the first French line faded, and Lobau had a second line ready behind them. But now the Prussian infantry was there in full force, and the second line went in just a couple of turns. Only two of Lobau’s original battalions were left.

By then the Young Guard had deployed, a brigade in Plancenoit and a Brigade on the ridge line N of it, but the Prussian 12pdrs had also arrived, and with some Prussian cavalry still to menace them it looked like Blucher could afford to stand off and try and blast the French into submission.

Having spent 4 nights on this already we decided to call it a day there. I’m sure that in the full game the Prussians would rather mask Plancenoit anyway (Hougoumont ditto), and pile on into the main battle.

The game lasted 22 turns, although the Prussians weren't on table til turn 5 (which was actually a bit ahead of schedule).

All worked pretty well. Just a few occasions of light cavalry vs less than well formed infantry that could have been more decisive, but otherwise all worked as expected and we were rattling through even the 3 stage advance to contact rules pretty well.

I tried out the tile spacers as damage markers, but found them in white not just visible enough - will try again in red, and anyway I like our smoke puffs. Unit labels had just the right amount of info, and were legible, but certainly need the MDF strip base so they can be taken off the sabots, and ideally moved between them.

We’ve now tested all the main parts of the battle and everything looks good. All the tiles are done, I just need to sort the cloths for the “level 0” bits in the valleys. All the figures are done, with just some basing and sabots to be sorted out. We’ve now given my mum the vital task of tracking down somewhere big enough for us to hire so we can actually play the whole battle some time in the second half of August. 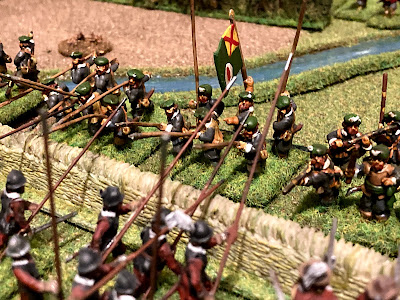 Heard about these rules back when they came out, and chatted to the team at a demo game at Wolverhampton just before lockdown hit. Finally picked them up last month and decided to run the 2nd Newbury scenario with them to see what the rules were like, and whether the Royalists could do any better. The ruleset is 84pp, Osprey sized, and has a downloadable 6pp QRS.

Same as the last game, with the King sandwiched between Manchester and Waller.

Waller was a bit quicker into Speen, but rapidly lot the oomph to actually fight through and clear the town, not helped by the early loss of almost all his cavalry. The King still had a unit on the E edge of Speen at the end. As activity faded around Speen Manchester finally kicked into life. The hedges frustrated early moves on his L flank, but his Horse cleared the Foot lining the hedge N and then tried to take Shaw House but were routed by the commanded shot inside. One of Manchester's Foot came to the same end, and Shaw House remained with the King til the end.
The Parliamentarian will obviously failed early as several unengaged units field the battlefield, even before being committed. Once Manchester finally made contact on his L flank both sides were down to about half a dozen units. Two Foot melees results in one of each side routing and ENDEX was called.

All started sort of well, but then I came to the first big (well 1 regt vs 1 regt, 4 bases each) cavalry melee and found myself rolling almost a hundred dice! Cavalry and charging makes this more than normal, but even so 20-30 a combat seems pretty usual (once for hit, another for damage, 4 dice per base, doubled for charge etc). By the end of the first evening I knew things had to change - rolling that many dice is just not quick! Another issue was that although the game was "stand" based, stands too 1/4 casualties, so you had to track those too.
So I decided to divide everything by 4 - 1 dice per cav stand, 1/2 per pike, and a kill is a whole stand not a 1/4 of one. Still meant about 20 dice total for some cavalry engagements but I could live with that. The whole game then hummed along.
There were a few other issues though.
With Foot vs Foot melee I was not only rolling 1-4 dice each, and getting 5+ seemed elusive, then getting 3+ to kill even harder, some melees went at least 6 rounds before any casualty - not fast!
Whilst I liked the random card idea they were just too random. You're meant to roll at turn end for EVERY unit, 9+ and you roll 2D10 for an event. Again way too many dice. I randomly rolled for each tertio only. And as the events are at the turn end they don't link into the narrative, so a unit that's sat in a peaceful corner of the field suddenly runs for no obvious reason.
The random activation again looked KO to start with - but with a token for every unit that's a lot to get through - depending on when the end-of-turn card comes up. So I switched to tertio activation which made more sense. But not tying the activation to a particular unit does mean you get that things where all the focus is on one part of the battle, and then end of turn comes up, and half the battlefield has done nothing.
I also didn't like the fact that routers had no effect on neighbours - other than if in own tertio when take a morale check, so minimal morale cascades. There's also no Army or Tertio morale mechanism so it's more or less a fight to the death. Quite tempted to add in Battlegroup:NORTHAG's chit system.
By the end though my mods were giving me a semi-reasonable game.

Played as written I really don't think it delivers as  a "fast play" set - and I didn't even bother with the per unit record cards! As a basis for my own new set of stand-based rules it has more potential, some nice ideas to steal and hopefully make more manageable. I think ECW and probably Medieval and earlier sort of suit an "old school" stand-based mechanic at 20mm, and it would also give a greater difference to my Napoleonic games at that scale. So next time my 20mm ECW comes out it's going to be a new set of stand-based house rules, plus of course whatever other new rules come out by then!
Posted by David Burden at 19:38 3 comments: