In response to one of the comments on my Semantic Web post I dug up the roadmap diagram I did 2 years ago. I still think the areas and steps are pretty valid, but we've not made as much progress in the last 2 years as I'd thought we would. Really little has changed since then, although signs are that by 2010 we might actually start tikcing some of the things off. I'll try and find time to update the whole docuemnt this came from.

Posted by David Burden at 17:10 No comments: 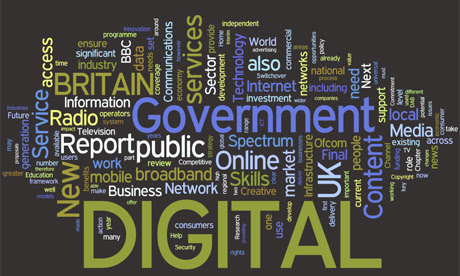 Underwhelmed by the Digital Britain report, but still a pity I won't be able to make the regional launch at the ICC today. The Wordle above nicely summarises the issues:

Overall it looks more like an "old media" report than a "new media" report, failing to grasp the possibly seismic change in communications that high speed broadband and mobile broadband could bring, and the changes in consumption (and production) patterns already happening.

Perhaps a better approach would have been a 3 part one:
- tidying up the old guard (radio, spectrum, BBC, Channel 4)
- rapid build-out of a next-gen infrastructure
- exploiting that infrastructure

Posted by David Burden at 08:49 No comments: