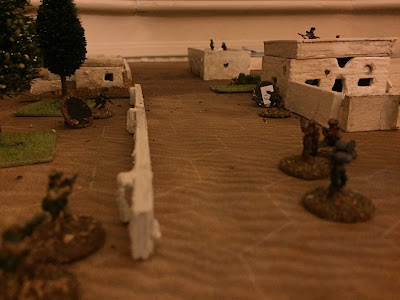 "Glossy" PDF, lots of pages but about half are builders and army lists. $16.99 at https://www.wargamevault.com/product/200433/Victory-Decision-Raid. No QRS but a lot more concise than Gruntz and there are really only 8 pages that cover everything you need for an infantry battle - so printed them out as an A5 booklet.

Standard, rules are in inches, so used 1 hex = 2 inches. Just a short game planned as I'm getting the hang of what I'm looking for. My own encounter rules as on other scenarios. The rules are for WW2 not modern, so chose suitable late-war German gear.

Cpl Hore had finally learnt his lesson so put Jones on point. As they reached the corner they failed to spot two insurgents on the roof across the street. Jones bought it instantly. Another pair of gunmen opened up from the roof above Hore firing at Wade and Kronfield across the street, stunning Wade. Then the air was rent with bullets as both fire teams opened up on the roof tops and all 4 insurgents went down. Pushing on down the street Wall and Wilson were half-way down when they were ambushed by Olasyar and his PKM. Wilson took a wound but Wall single handly killed both gunmen. As the remaining gunmen opened up from the main compound Wall pushed McDowell and Gallagher right flank into the bushes to get an angle on the gate. Wade (now recovered) and Kronfield legged it across the gap to the compound wall but this time Kronfield got hit and was out. Hore also dashed across to join Wade. Meanwhile at the gate Mahamadou opened up with his RPG7 on McDowell and Gallagher in the shrubs but stunningly failed to hurt either of them. Just then Hore lobbed a grenade over the wall which took out both the insurgent leader and  Mahamadou. Two guys left to go, and with McDowell and Gallagher firing from the shrubbery and Wall from down the street they were soon gone. Mission accomplished, all insurgents killed, TV crew OK, but one Brit killed and one wounded.

Ranges were better than Gruntz, but still on the short side. Few DMs but very bloody. This is mainly because each man get 3 actions - so can shoot 3 times! Initially I played it wrong, giving just one fire, but treating 2D6 as two separate D6, each going after the 4+/6+ to hit - but the effect was probably the same. So rolling 2D6 three times, with just 4+/6+ to hit it wasn't strange to get each buddy pair scoring 6 hits on their activation - then a 4+ saving in hard cover still gives 3 hits, and then a 5+ to kill averages one kill per activation!

There is an odd opposed activation role which could be a pain, so I activated in pairs not individually. There is spotting (but oddly on the Leadership factor), but no suppression, and no DM for height. No morale. You can through recover from wound, 1 turn to go from wounded to stunned, another to fit, and again rolling against Leadership (!?). The actions options were very good, with movement (no running), firing, spotting, recover but also things like "going to ground".

Better than Gruntz I think, and the action choice one of the best, but very bloody and a probably time consuming activation model. Overall 6/10.

Posted by David Burden at 14:23 No comments: 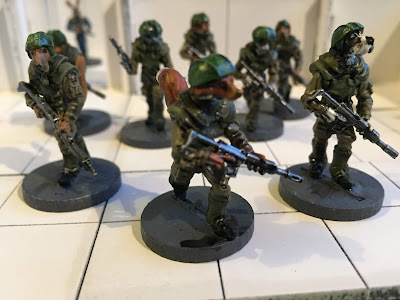 The EDF team for Albedo ACP164 is almost done. Going to redo the grey cat as was just too dark.

Posted by David Burden at 13:56 No comments: 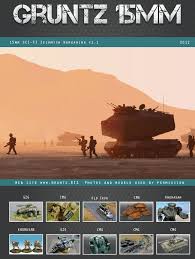 A bit wordy with stuff buried in and spread over multiple pages, but there is a QRS (although doesn't bother to tell you movement distances for troops on foot!)

Standard, rules are in inches, so used 1 hex = 2 inches. Just a short game planned as I'm getting the hang of what I'm looking for. My own encounter rules as on other scenarios.

Cpl Hore got to the corner of the street and spotted two insurgents on the roof ahead. He and Jones put down some SA80 fire but the insurgents were too well protected. When the insurgents returned fire Hore was instantly Waxed. Wade and Kronfield moved up and into the house at the top of the street to get a better angle. Wall and co started legging it right to get to the compound and house on the corner but insurgent commander Nufail let rip with his AK47 followed by the "boom" of Mahamadou's RPG7. Both Wilson and McDowell were waxed and Wall and Gallagher got a "condition brown" and pulled back. Wade and Kronfield returned fire from the roof top on the initial insurgents and Waxed them both - mainly through the Minimi's full-auto mode.

With 3 Brits down by the end of effectively Turn 2 I called ENDEX!

When Hore and Jones missed first time I thought it was going to be a slow game, but it just proved to be that -3 DM against hard cover. The insurgents had no difficulty hitting the Brits in the open and the body armour had what seemed like a minimal effect - no one was saved by it.

Like several of the "gamier" rules weapon ranges were very short (8" effective, 16" max) for a skirmish game, and there were very few DMs (hard/soft cover, firer static). However the mechanics were a bit complicated as you were changing both the firers fire stat and the defender guard stat, and then rolling for the difference! Body Armour only changed the damage roll from 5+ to 8+.  Area damage was primary target at full, and then others at -3 rather than a true blast radius. No direction suppression option and no spotting rules.

The card based activation was good though, you drew a card per unit, assigned them (hidden) as you wanted, and then both sides declared. 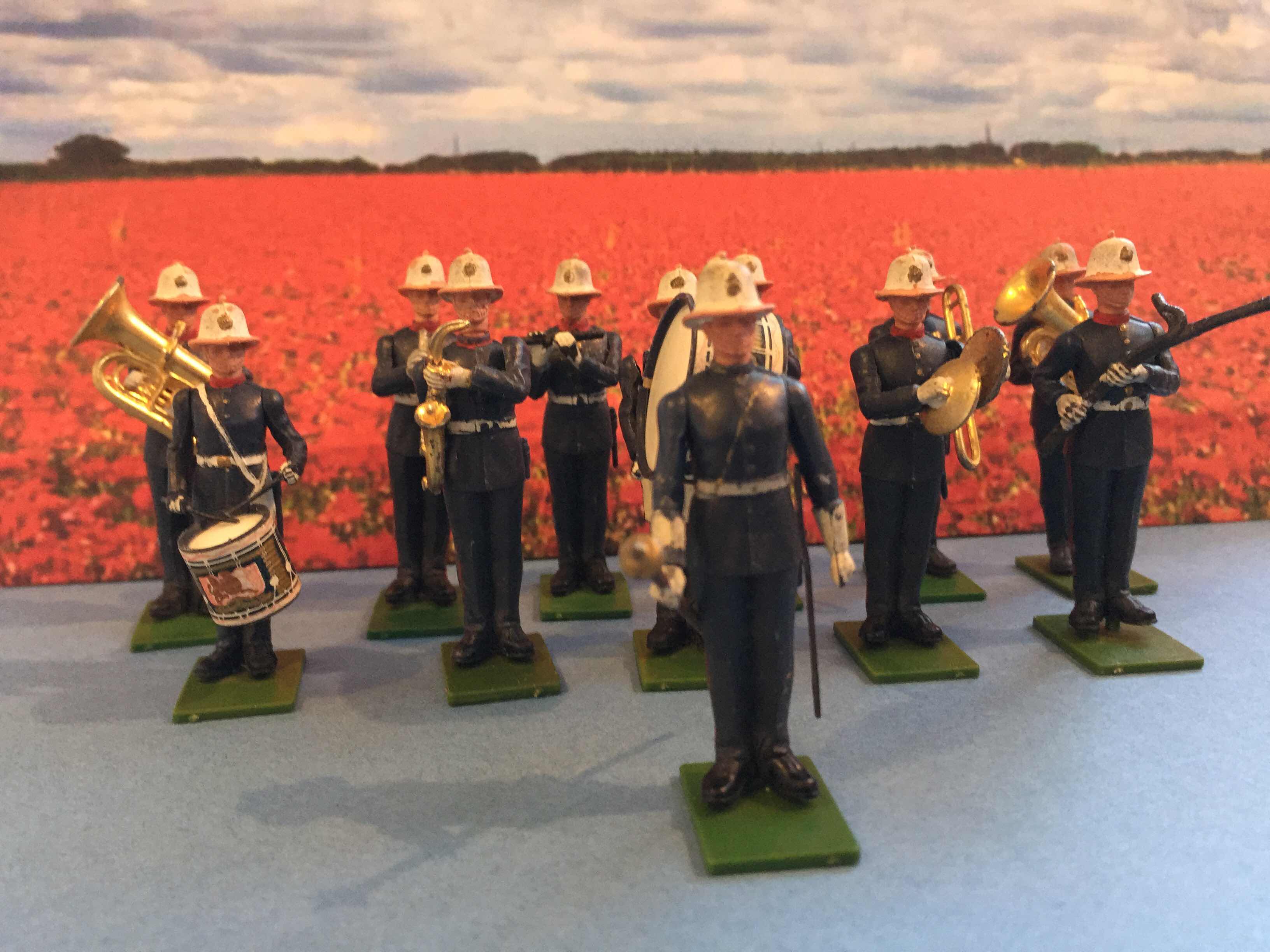 When I was a kid we used to watch the Cenotaph service on TV, and then afterwards I’d re-enact it with my toy soldiers. I can’t remember whether they were Britains or Airfix 1/32nd or even 1/76th, but what I do know is that my Britains Royal Marine band always provided the “music”.
So on the 100th anniversary of the WW1 Armistice it seemed appropriate to dig the band out of retirement and to stand in tribute to all who died, from whatever side, in WW1, and indeed in all armed conflict. Appropriately for old soldiers (they last stood for parade about 1975, and probably first stood 1970 or so - so almost the 50th Anniversary) 9 of the figures had lost limbs, based or even heads and so were unable to parade - but having got them down to the work bench it would seem ungrateful not to fix them up and put them on a decent base before returning them to slightly better storage!
Posted by David Burden at 18:12 No comments:

Standard, rules are in inches and cm, so used 1 hex = 2 inches. Just a short game planned as I'm getting the hang of what I'm looking for. My own encounter rules as on other scenarios.

Cpl Hore was suitably stunned when he got the street corner without being shot at. In fact all of the first 4 encounter points rolled empty. With Hore's team covering from either side of the T junction LCpl Wall and Pte Wilson ducked and weaved across the road to get to the far gateway. Mid run they were engaged by insurgents on the next two rooftops. Caught in the interlocking fire Wall got suppressed, but next go he and Wilson made it into the gateway and cover form at least one shooter. But they were still in sight of the better team and Wall got hit twice and was out. For what seemed like an age Hore and Co brought down fire on both rooftops, but the insurgents had decent cover. They'd get suppressed but would soon be up shooting again. With units on 3 corners of the T junction co-ordination was also an issue. Finally Hore got Gallagher (with Minimi) and Wilson up onto the rooftop so bring better fire onto insurgents whilst he led Jones and McDowell on a right flanking move in order to get the UGL in range. Finally the Brits' luck turned and an insurgent on each rooftop was killed, and the other suppressed. It was Turn 15!

In turn terms probably one of the longest games. Units kept failed to activate (needing 4+ or 5+), so much so I upgraded the Brits to Veterans (3+). Lots of misses on firing, and when they did hit it was taken as a suppression and so recovered next term - there wasn't the weight of hits to turn into damage (2nd on a figure or 3rd on the team). Body armour did its job though, mostly. The insurgents also had cracking die rolling for most of the game, the Brits less so. Ranges were very short (hence the move of the UGL), and the UGL had no indirect fire/explosive mechanic, it was just another 3D6 damage maker.  No spot rules or proper suppression rules (just a by product of hitting), or smoke. Very few DMs.

I know a lot of people like FUBAR but it was just too simple/simplistic for me. If you want a one pager that feels more realistic Danger Close is way better. Overall 6/10.

Time to gear up for Gruntz!

Posted by David Burden at 13:42 No comments: 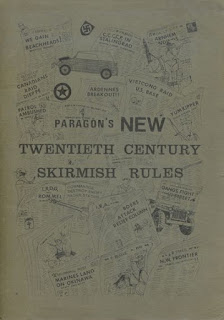 Real old skool - it was our go-to set WW2 skirmish rules in the 70s. 16pp A5 with card cover and very rusty staples!

Standard, rules are in cm, so used 1 hex = 5cm as made the maths easier. Just a short game as I knew they weren't really a contender.

Cpl Hore got to his favourite corner and insurgents opened up from the roof of one of the buildings, and in what would prove to be quite a lucky shot gave him a serious leg wound. He scurried back into cover whilst his fire team, supported by LCpl Wall and his Minimi man. It takes three turns and first magasines running out and four UGL rounds to just take out one of the two gun men (and then only 2 x serious, not dead), with the other escaping unscathed. Wall has sent his grenadier and #2 round the RHS of the building in front to try and get to a higher vantage point, but they get shot at by the PKM team which completely misses them!

First off, this is meant to be a "write your orders for each man and then move simultaneously" (well it was the 70s). I ditched that for side turns by random initiative. There are very few DMs in use, and as you can see getting hits is hard, kill harder (need 11+ on 2D6 AFTER you have you hit - usually 6 on 1D6). Morale is primarily per man - a roll for almost every action, on movement you go slower (or perhaps faster), on firing you get a -1 or -2 DM, or possibly a +1. Very few DMs on the morale role itself.

On the plus side, the hit location mechanic was simple and not only gives nice extra flavour but can be important (eg Hore being hit on unprotected legs, not on his body armour). Also it does have ammo tracking, but on a magasine=3 bursts/rounds of shooting, rather than per bullet. Both of which I want in my rules.

In some ways not as bad as I expected, once you rip out the written rules! Overall only 4/10 as written though. 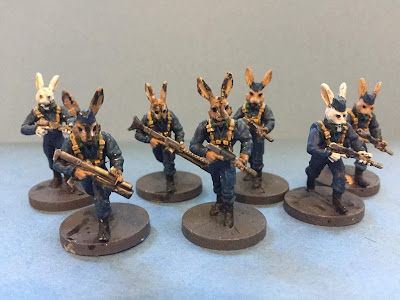 Just finished painting my ILR squad. bases still to be done. The hare's didn't come out as good as I'd hoped, or the white rabbits, bu think the standard rabbits are OK. My first real attempt to do 3/4 colour/shade 28mm painting too. Now on to the EDF!

Posted by David Burden at 13:29 No comments:

1st of the Month 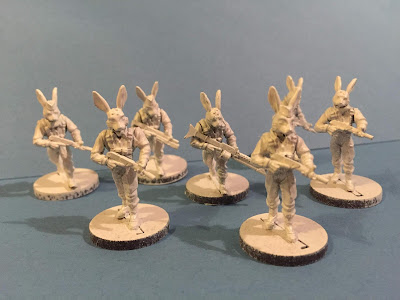 1st of the month so what better than 7 white rabbits! (I know, they look cream in the photo and more like hares than rabbits!) Albedo figures he we come. Hardly ever painted 28mm so should be an experience!
Posted by David Burden at 10:43 No comments: