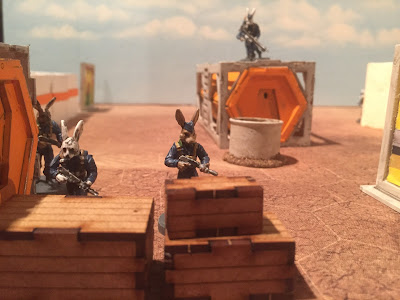 The Story So Far

Lupus Company of 3rd Battalion, 15th Armoured Infantry Regiment EDF was deployed rapidly forward to Topi Junction. Leaving 3rd Pl and Sp Pl to hold Topi, 1 and 2 Pl moved rapidly to take Chanzori but arrived to find the ILR just digging in about company strength. A hasty attack was a tactical success, knocking out the Satcom, but failed to dislodge the superior numbers (and quality) of the ILR Assault Company there. As the rest of Lupus Coy moved up (along with elements of Kilo Company) 2 and 3 Pl spent two nights in heavy patrolling conducting nighttime raids on the ILR, succeeding in the first to kill some critters but failing in the second to take out a LARC. Once the rest of the Company arrived it was time for a deliberate attach on flank of Chanzori, whilst two platoons of Kilo Company attacked the other flank.

Checking points EDF was meant to have 34 pts against an ILR force (smaller but more capable) of 20 pts. I scaled that down to 7 pts for EDF (2 sections, and extra fireteam plus a PML), and 4 pts for ILR (Assault section plus an Assault Pl HQ). The table had open ground in front of the town, and the IRL had rigged barricades on most of the main entrances. The EDF rolled for the train station as being their objective, to be held for D3 turns (determined once taken). ILR was controlled by the Solo/AI rules as in the latest issue of MW&BG.

The EDF sprinted across the open ground as fast as they could, but still took several turns (low cards and body armour), and for much of the time were out of range of the puny ILR carbines. The forward ILR positions began to cause problems as the EDF neared but a few rounds from the PML took one of the main ones out. The extra fireteam tried to go right flanking but found no entry point, so back-tracked to where the PML had just struck and tried to sneak in their to enfilade the ILR team. An ILR LMG on a roof opened fire causing casualties so a brave EDF trooper lobbed a grenade up onto the roof, which bounced and came back down on top of him and killed him!

Better progress was being made on the other flank, with EDF coming off the best on the firefight. But down to 2 critters the ILR fireteam leader decide to charge the EDF and in a multi-turn melee managed to wound one EDF before being finally killed.

His colleague hunkered herself down by the station platforms and managed to hold the EDF off for several turns as the rest of the ILR abandoned the (their) left and centre zones and came to her aide. As she fell to a UGL grenade the EDF went firm and rolled for 2 turns to defend the station.

As the ILR rolled in the EDF shot the lead critter at point blank as they emerged from an alley. Another EDF fire team pushed forward and flanked the ILR taking out two more critters, but losing one in the process. The second Shuffle card was drawn and the game was over.

Another great ACP164 game. I think the solo/AI rules are a little bit cautious, the ILR HQ in particular hung back a lot and a lot of "do nothing but react" results. The ILR stepping up to "aggressive" as the game went against them was I suppose a reasonable reflection of their last ditch attempt to save the game, and was triggered by the fact that EDF was able to attempt more shots as they had more figures, but then kept missing due to their Green rating.

Posted by David Burden at 13:33 No comments: 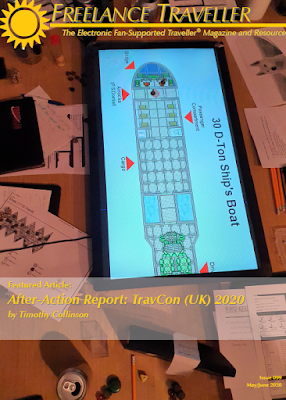 Rather nice use of a 32" 'tablet' to provide the maps for a game of Traveller at TravCon 2020, reported in the latest issue of Freelance Traveller.
Posted by David Burden at 18:39 No comments:

Email ThisBlogThis!Share to TwitterShare to FacebookShare to Pinterest
Labels: traveller 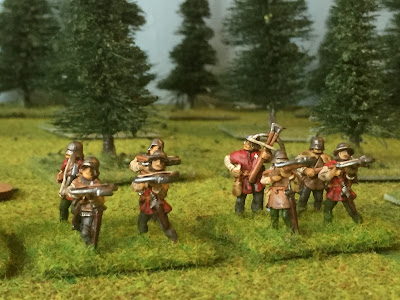 With Kings of War failing to make the cut, and still not being 100% happy with my current in-house rules I decided to have a go at a new set with three main objectives:


I followed a bucket-of-dice model for combat (2 D10 per stand, 1 if damaged), stands eliminated once 2 hits. Pretty basic DMs for to-hit and to-penetrate. Melee uses to-penetrate only, with different weapon types, and all with different armour types. Troops randomly dice for quality when first needed (my now standard 2DFate model).

The orders list is below (original, now modified after playtest), with the roll needed for order change, modified by damage and quality and local commander. If a unit fails the change it FALTERS to reflect order confusion.


All units start on an order, and each side has one activation card per unit (not assigned) of which about 1/3rd allow order change (varied by commander quality). Cards are then shuffled and then drawn in turn, the relevant side either activating a unit on current order, or trying to change its order if allowed (I used picture cards for order change, 1-10 for normal activation). One thing I didn't expect but works well is that you can "sacrifice" an order change card in order to activate an important unit earlier on its current order.

I used a new iteration of my random table set-up rules which worked well. There are then "fate" cards which are diced for which made just minor changes to deployment and none to terrain, but which did bring on a rain storm which stayed the whole game, reducing bow, eliminating power and reducing movement.

The Lancastrians were on the defensive and the Yorkists slowed slightly by the stream. Currours on both sides charged on the N flank and pretty much eliminated each other. They also made demonstrations against each others lines (reborn), but as small units facing a hail of arrows made little headway - seems reasonable. In the S Yorkists handgunners tried to get close, hoping the rain would stop, but took increasing damage and eventually routed. As the main body of Yorkist bill and DMAA came on they took damage but managed to make contact, the DMAA dispatching Lancastrian archers. Up to this point most orders were the starting ones, but now as risks and opportunities opened up order change became important, and both sides failed several roles, so the Yorkists failed to exploit, and the Lancastrian response was slowed - seems reasonable.

The Lancastrian leader joined his DMAA (which was in reserve) and rushed to plug the gap in the line which the Yorkist DMAA had opened up - whilst Yorkist bill was in danger of breaking through a neighbouring unit. The two DMAA joined in melee and the Lancastrian leader was killed!

At the moment there is no instant surrender, but all troops take 1 damage so the Lancastrian force was, whilst substantially intact, notably weakened. The Yorkist DMAA was also spent though, and their Bill companions eliminated by two Lancastrian units. With the Yorkists only have one decent unit left, and the Lancastrian commander dead it was ENDEX and something of a draw.

Well I think that worked pretty well. Some tweaks required as ever but the C&C choices of where to play the order changes, and the friction that failures introduced worked well but nobody hung around for no reason doing nothing. Think I'll refine further and maybe try out for ECW. The stand and BOD mechanic was OK but needs a bit more work, still find BOD models very variable.

Some additional shots from the game... 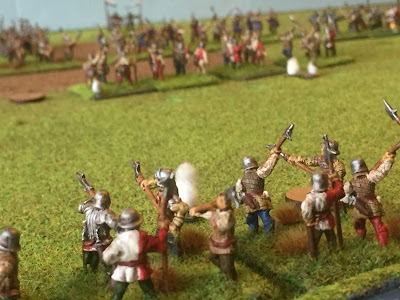 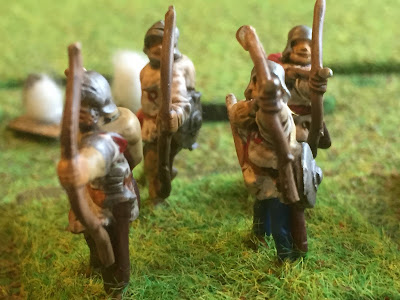 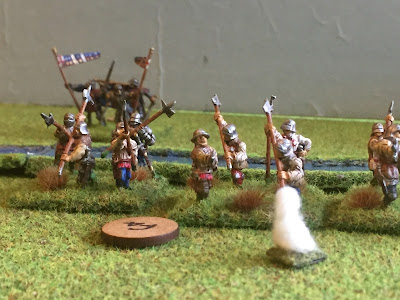 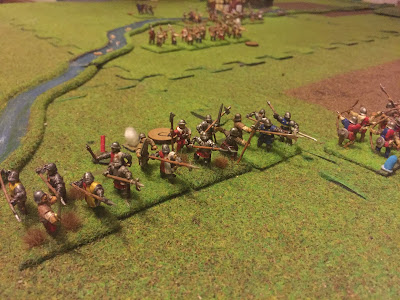 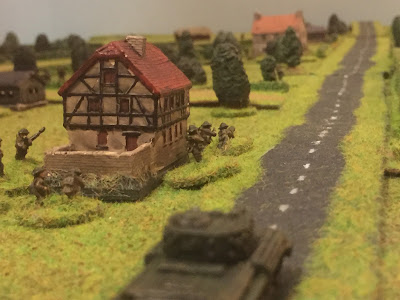 So that's the end of the Platoon MegaTest - 11 different rules played out against a set of 6 inter-linked scenarios. So what are my conclusions?

The Op Martlet Campaign from Too Fat Lardies was great fun and gave a great structure. Playing it By the book it would have been a real challenge as the British platoon suffered badly pretty much every time, whether it won or lost, and would have found it hard to keep going until relieved. I've got 29 Let's Go but also tempted by the The Scottish Corridor. I'd also like to do one based on the Canadians on Op Totalize.


So Bolt Action with house rule changes a clear winner, and even struggling at this scale to see why I need to waste time improving CWO. May be a different story at Company upwards though. 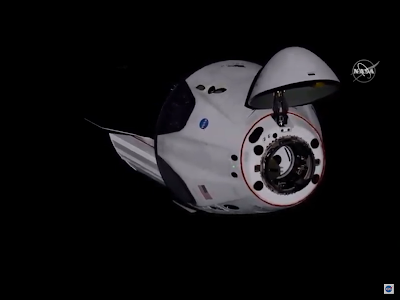 Spent a fair chunk of the weekend watching the live coverage of the SpaceX/NASA Demo-2 mission with Crew Dragon heading up to the ISS. Just as Musk intended the whole thing looks worthy of a "modern" spaceship, and it as fascinating to watch the crew pretty much do the whole thing with their arms crossed, and then give a tour of a half-empty capsule. 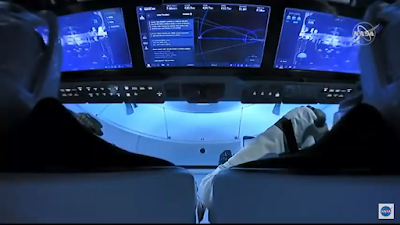 Great to see the actual control screens, still haven't played the docking simulator, and the over-the-shoulder view above could be from any SF movie. I assume someone somewhere on the Internet has documented all the screens shown and tried to enhance the text on them! 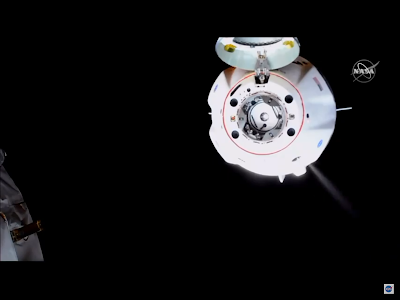 Despite all the talk about this being "the beginning of a new era", that new era is really of the principle of commercial spaceflight, not of Crew Dragon - it's Starship that will user in the real "new era". Just a pity that SN4 blew up - and about 30 secs after I stopped watching the static-fire live feed! But SN5 pretty much good to go, SN6 almost built and SN7 started. As Musk has said, it took at least 4 goes to get Falcon to orbit, and the hard thing is building a rocket factory, not just building the rocket. 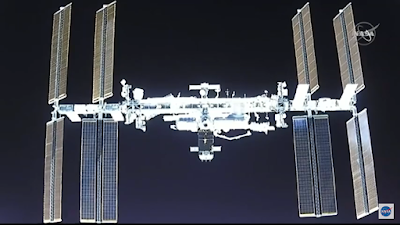 Posted by David Burden at 08:28 No comments: