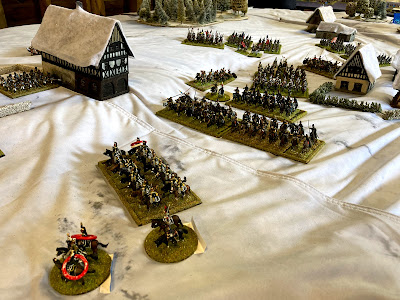 Last weekend Francis hosted a "team-building" weekend in his suitably airy barn. I was allocated to the "Allied" team and Nick to the "French" team. Our teams goals were to convince the residents of La Rothiere, Petit Mesnil, Chausmesnil and Morvilliers that the "Monarchy" brand of ruler was superior to the "Emporer" brand. In addition we needed to send a spearhead sales team beyond these towns to be ready to continue our marketing campaign in the city of Brienne.

The terrain as ever looked fantastic, with a suitably snow covering to the table. The stand-out pieces though were Francis' buildings, where he'd cunningly draped them in the sort of semi-transparent glittery "snow-scene" cloth you buy at Christmas so that every buildings was instantly (and relatively cheaply) converted from a run-of-the-mill house or barn to something straight out of a Christmas card.

Nick and I found that we were not only on opposing teams, but had commands facing each other on the far (Allied) right flank, fighting for control of Morvilliers. Nick started in occupation and I had a meagre Division ( Hardegg's) of about 6 battalions of Austrians  to oust him. 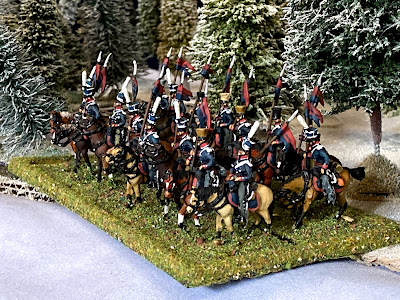 One of the features of the battle itself was that the French had lots of cavalry, but little infantry, whereas the Allies had lots of infantry but little cavalry. This makes for an interesting and challenging wargame.

Battle was soon joined on the Allied Left and Centre, and quite honestly all I saw of that was lots of Allied infantry going bravely into the fight and steadily pushing the French back. To my left the Crown Prince of Bavaria spent much of the first day fighting his way out of a stoppered defile, but once free of it he had  clear run to get off-table and out-flank the French. 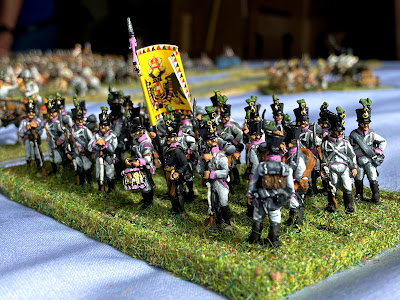 Closer to home to my immediate left Frimont fought bravely to take La Giberie and the ridge line just S of Morvillier.

Meanwhile I spent the first day trying to get into Morvillier itself. My brigade advanced on the first building, taking fire from a French gun, assaulted the building, pushed the French out, and then failed their follow-up roll, so stood outside whilst the French moved back in. Subsequent assaults failed (and Nick made a point of rolling on 7s and 8s on a D8 all day), and by the end of Day 1 I was one brigade down and no closer to getting in. 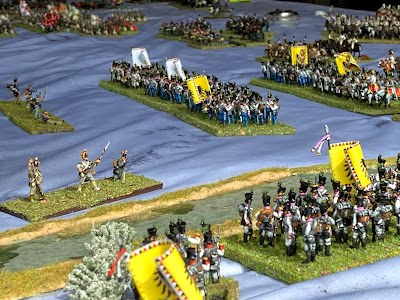 Day 2 saw a somewhat unwelcome resupply of ammunition to the artillery (favouring the French somewhat), but with only 10 turns left it was time to get stuck in. Nick decided to finally push his cavalry forward (my one gun battery had been doing its best to hold them off, but being the only unit left in its Brigade was forever wondering about going home). My cavalry charged before they got mauled by his horse artillery, and miracle of miracles I started throwing 8s and Nick started throwing 1s and 2s, and whilst one of my regiments was pushed back the second held Nicks to a draw. With the cavalry kept busy my second Brigade (of only two battalions) could now renew the assault on Morvillier, and took the first building with ease. Too weak to take the rest of the town Frimont was racing to my support, but got delayed when Nick's Dragoons occupied the Giberie ridge and threatened any infantry move N into Morvillier. Vital turns were lost whilst Frimont cavalry extracted itself from tussles further South, but the Crown Prince, supported by some Cossacks, was also getting behind the ridge and Nick's troops, and the Dragoon's position was beginning to look vulnerable. 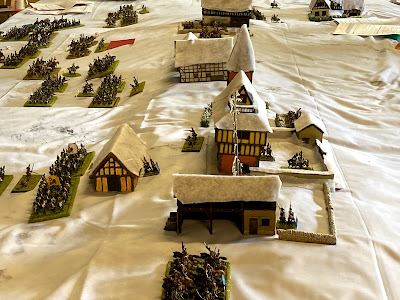 By turn 16 we had all our objectives except Morvilliers.  I still had a chance though. I worked out that in the 4 moves left I could just reach the stronghold building in Morvilliers with one of Frimont's infantry brigades and would have one turn to try and take it. Nick's dice luck was also breaking and I was beginning to roll some more 8s.

So in the interests of time it was decided to stop all the other fighting and just focus on Nick and I. My two infantry battalions already in Morvilliers took the 2nd building, our cavalry held off Nicks, the infantry moved forward, but with 2 turns to go I rechecked the distance and they were going to be 2cm short! But Nick's Brigade was very fragile, and he had to make Brigade Command Tests for turns 19 and 20 anyway, so we just stopped all movement and rolled those. He rolled 8 on Turn 19 and passed but then a 2 on Turn 20 and had to retire out of the Stronghold and my battalion (only one by then) already in Morvilliers could claim the Allied victory!

A great game as ever, enjoyed by all despite the COVID limitations. Many thanks to Francis for organising and hosting, and to the Umpires for ensuring fair play throughout. 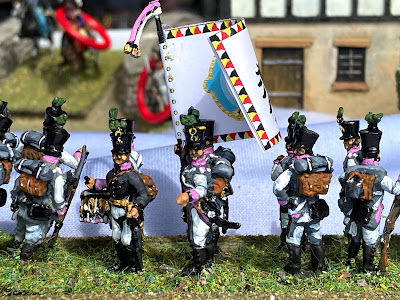 Posted by David Burden at 08:29 No comments: