Nick, Alan and I had a great weekend staying in the Landmark Trust apartment at Hougoumont. It sleeps 4 (2 bedrooms), and whilst not cheap it's a real experience as after the tourists and museum staff have gone home you've got the whole place to yourself!

The apartment is in the Gardner's House - the one above the South Gate. The Chateau itself was never rebuilt after the battle, and the Farmer's House was also pulled down - so it's the only accommodation building left - and you have all of its upper floor. There is a good sized living/dining room (4' x 4' table for gamers, and space to take a 6' x 4' board on it), galley kitchen, one bedroom on the same floor (who's outer window lets you shoot on those approaching the South Gate, toilet & shower rooms, and then upstairs another bedroom with an attic window above the South Gate.


The gardner's house from inside the courtyard. The flat occupies the row of windows on the top floor and attic.

The flat has a superbly stocked library of Waterloo books, and the walls are crammed with Napoleonic prints, so its a wonderful place to go to to soak up the atmosphere, walk the courtyard and walled gardens, and think what it must have been like in 1815. The son-et-lumiere show in the barn is pretty good (the new film in the main museum by the Butte is excellent by the way), and it's a useful small museum on the site (you have to pay).


One interesting debate is those two filled in white windows - essentially the back of the living room now.

If you look at this contemporary print of the battlefield they are also shown as filled in:


Event though almost every later painting and diorama shows soldiers shooting through them! 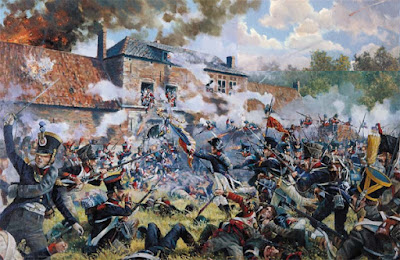 Were they blocked up following the battle - or were they like that during it!

The main modelling note though was that the main barns need thatched roofs not tile ones - so need some modelling clay to cover the tilework on the Hovels version! 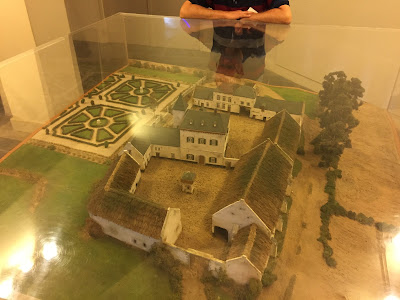 I also took the chance to take a couple of 360/720 degree photosphere's, one in the courtyard and one in the garden/pasture. You can find them on Google Maps (activate Streetview man) at:

I took along the Command Magasine game of  Hougoumont: Rock of Waterloo to play. It's an SPI type boardgame with about 1 counter = 100 men/1 company. We didn't manage to play to completion as we started twice (the map now has atmospheric blood/wine stains across it), but it seems a good game although you do get a sense of playing to the rules not the scenario (our 2nd game looked very different to the first), and my feeling was that it is an easier  task for the French in real life. 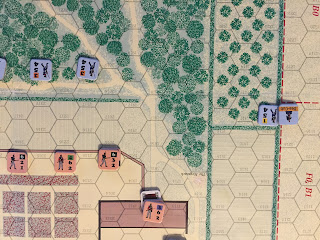 I also had a set of simple skirmish rules for Hougoumont that we didn't get chance to play, and also tempted to try a scenario with Sharp Practice to get to some sort of Napoleonic Skirmish scenario for the place.

We also played a bit of D&D, but the big hit was Palazzo, a Rio Grande mid-size game, over in about 40-60 mins, interesting decisions on every turn - well recommended!

All in all a great weekend, and well recommended.

Posted by David Burden at 13:50 No comments: 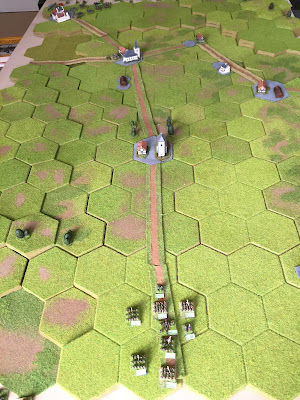 Scenario opens at 0700 as Gudin's 3rd Division (bottom of image) of Davout's III Corps tops the defile from Kosen and the Saale valley onto the main plateau. Up ahead of them is Hassenhausen (centre of image above). Problem is it's thick fog so they can only see 100m ahead of them, so they aren't yet aware of Blucher's Light Cavalry Brigade approaching through Poppel (top of image) - and more importantly of the whole Prussian Army (well at least its 1st Line and Reserve Corps). The rest of the French, including Napoleon, are simultaneously engaging the rest of the Prussian's at Jena.

The scenario rules allowed fog to lift at a random rate each turn. All units  not on the table at the start also come on with random delays - so a unit may arrive 6 turns later than you'd hoped.

So, on with the game as it played. 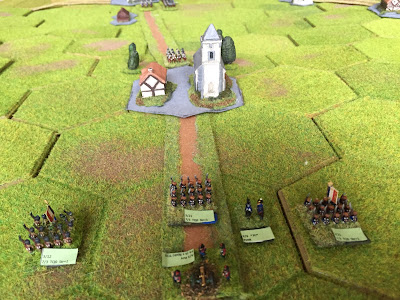 The French close on Hassenhausen at the same time as Blucher. Blucher's cavalry are first in just as the fog lifts, see the French and charge straight out of the town (unformed). The French hold their nerve and send the horses packing. 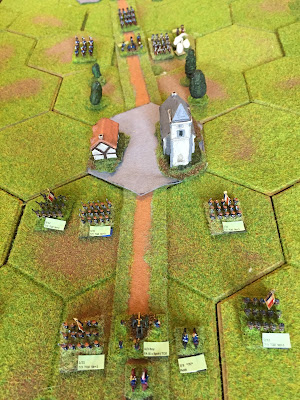 With the cavalry pushed back (smoke/damage markers) the French infantry can push on into Hassenhausen. 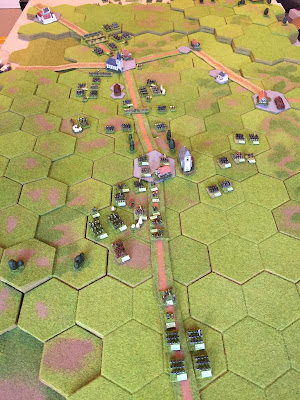 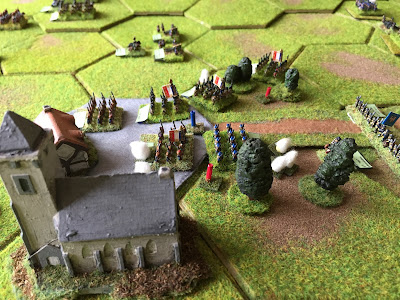 End Turn 12 (1100) - Bloody fighting for Hassenhausen, the Prussians come through the sunken road/woods on the W (right) of the town, get repelled by the French, French counter-charge form the flank, rout the Prussians but then get charged themselves by the Prussian 2nd line. 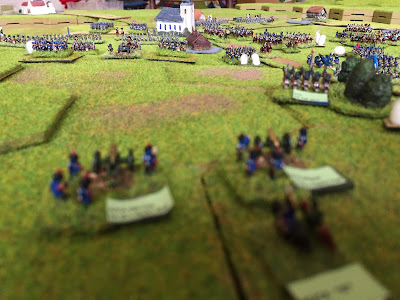 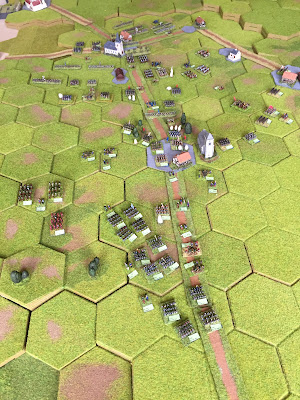 Overview of the whole battlefield. Friant's Division is being swung S (left) of Hassenhausen to go against Albensleben. The line to Spielberg is being probed by Prussian cavalry but holding. I was worried that the masses of Prussian cavalry would unbalance the scenario but they've been pretty ineffective against the French and the small amount of French cavalry has also sent some packing. The battlefield is now too crowded for them to be effective. 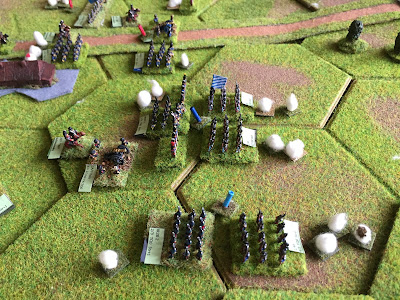 End Turn 15 (1200)  Battle Royale developing just S of Tuagwitz/Poppel with about 4 - 6 Bn a side getting involved. The  Prussians appear to be getting the upper hand at the moment, but both sides have fresh brigades to throw into the fight. 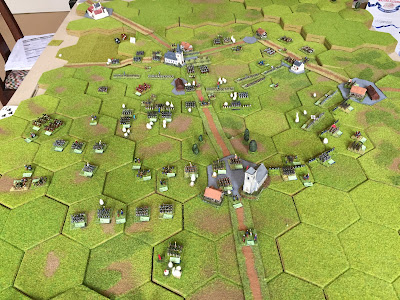 The Prussian are also now assaulting the French right wing with elements of Wratensleben's Division. Davout is desperately awaiting the arrival of Morand to either shore up that flank, or if it's holding to punch through Friant in the South.

Posted by David Burden at 13:39 No comments: 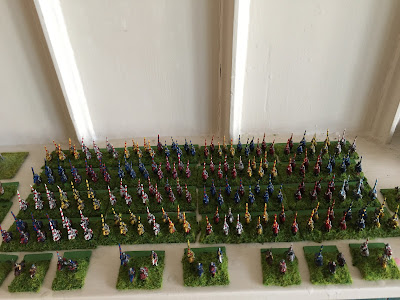 It's been a busy couple of weeks with dealing with 1:1 soldiers taking precedence over 1/76th or even 1/300th, and haven't had a whole weekend at home for what seems like a couple of months. So in between the gardening tasks I actually managed to get quite a few things finished off this weekend. 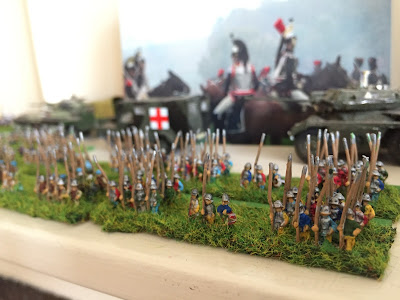 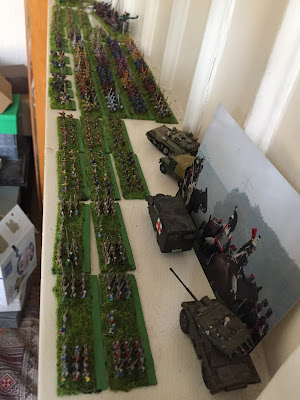 First off, I finished basing my 2nd and last batch of late medieval 6mm. Mostly French knights (see centre block shown at top of blog - 176 of them!), some bow and crossbow, and both Scottish and Swiss pike. All set now for Agincourt, hopefully before the end of the month. 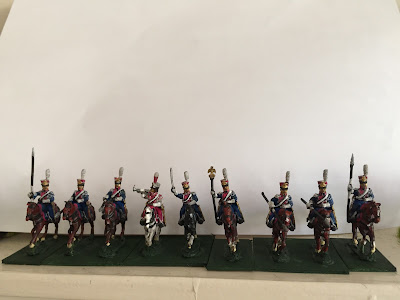 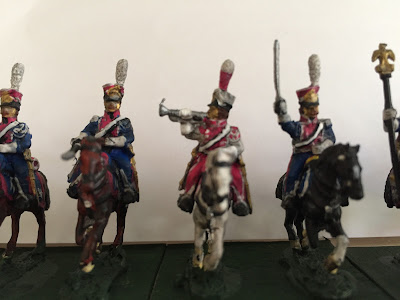 Next up was finishing off the Polish Lancers, 9 figures per Regiment. They'll get their proper bases once I've done the Dutch Lancers. Nice 20mm metal figures from Newline. Didn't realise that about 1/3rd of the "Red" Lancers were actually blue - only the Old Guard squadrons wore red. 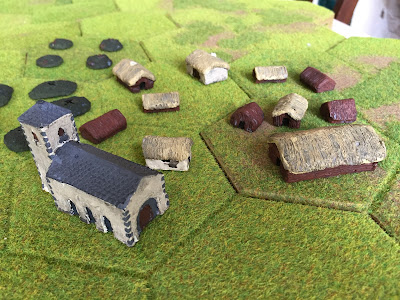 In the odds-and-ends category I also finally painted up the 6mm medieval buildings I bought from The Square at Salute, and also some objective markers and sniper/ambush markers for use primarily in mechanised games. 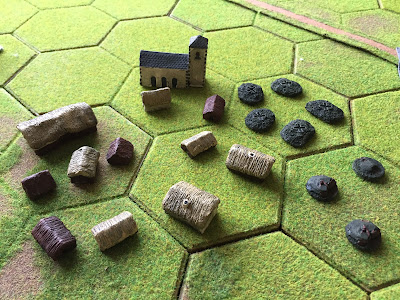 Oh, and you may have spotted some 20mm BAOR vehicles in the background. I found those in a box when clearing out the loft the other day. The Scorpion/Scimitar (latter in AMF(L) Norwegian garb)) are the Airfix kit, but the FV432 and Fox were scratch built by me aged about 17 - from plans in Military Modelling or Airfix Magasine I think. 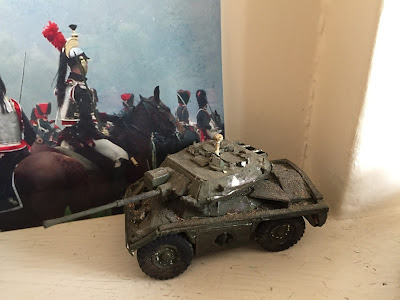 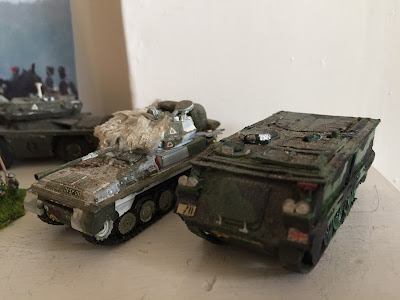 Well, that's it for the weekend, apart from getting started on the "Red" Lancers. The main aim this week is to start the Auerstedt wargame.

Posted by David Burden at 13:33 No comments: 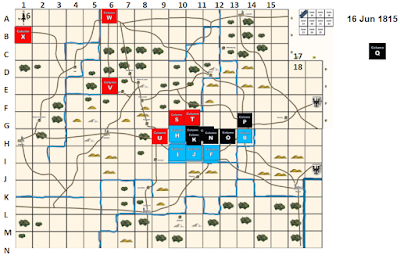 The first phase of our Blucher 100 Days campaign has reached it's climax at the end of 17th June with a major battle outside of Sombreffe. In fact what we have is almost a mirror of Waterloo, the outnumbered Prussian line having to hold against the near full might of the French whilst the British are all set to come on as reinforcements during the game.

The starting board will take in columns H/A, I/D, J/E and F/C of the French, and K/L and N/M of the Prussians. However Prussian O will come in onto a friendly square to support N/M and British T likewise to support K/L. Most interestingly British S and U will come onto a hostile square on the flank and rear of H/A!

In a rather bold move Prussian Column P decided to fix French B, since B had stopped it also reinforcing the battle, and to ensure that B didn't go against the Prussian lines of communications.

The other British reinforcements are again too far out to help.

So a reverse Waterloo just NE of Ligny. We hope to fight the game in August.

Posted by David Burden at 13:45 No comments: